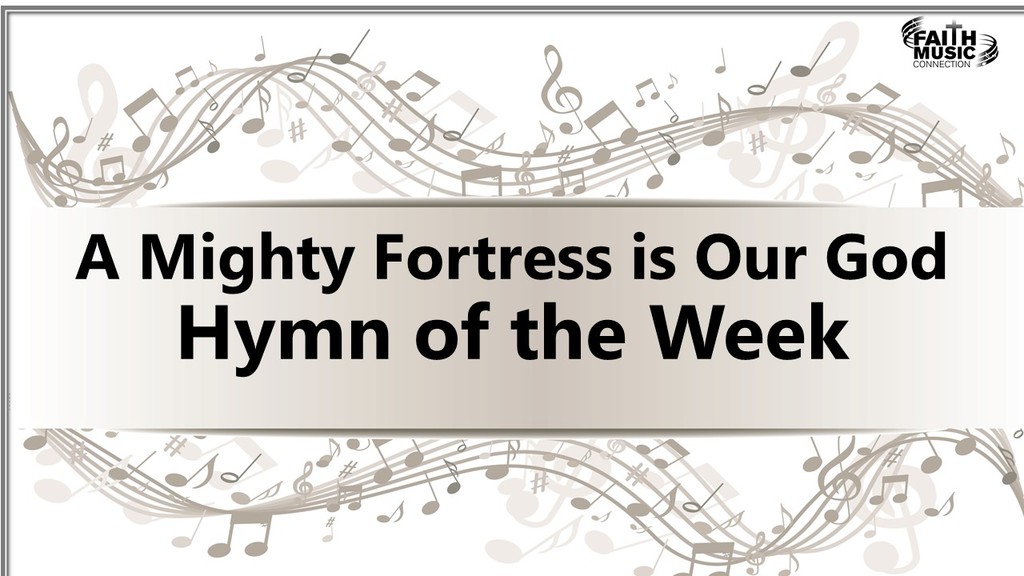 A Mighty Fortress is Our God

Welcome to The Hymn of the Week. This week, we will consider one of the great, old hymns of the church—almost 500 years old. It served as a rallying cry during the Reformation and has been translated into more than 50 languages. The author also wrote the tune with which it is paired. This tune has inspired several notable composers. J.S. Bach (1685-1750) harmonized the tune and composed an entire cantata based on it. Later, Felix Mendelssohn utilized it in the final movement of his Fifth Symphony, popularly known as the "Reformation Symphony." 19th-century opera composers Meyerbeer and Wagner also incorporated the tune into their works. Most importantly, this hymn continues to inspire Christians of all denominations and is included in a wide diversity of hymnals... A Mighty Fortress is Our God—this week’s The Hymn of the Week. 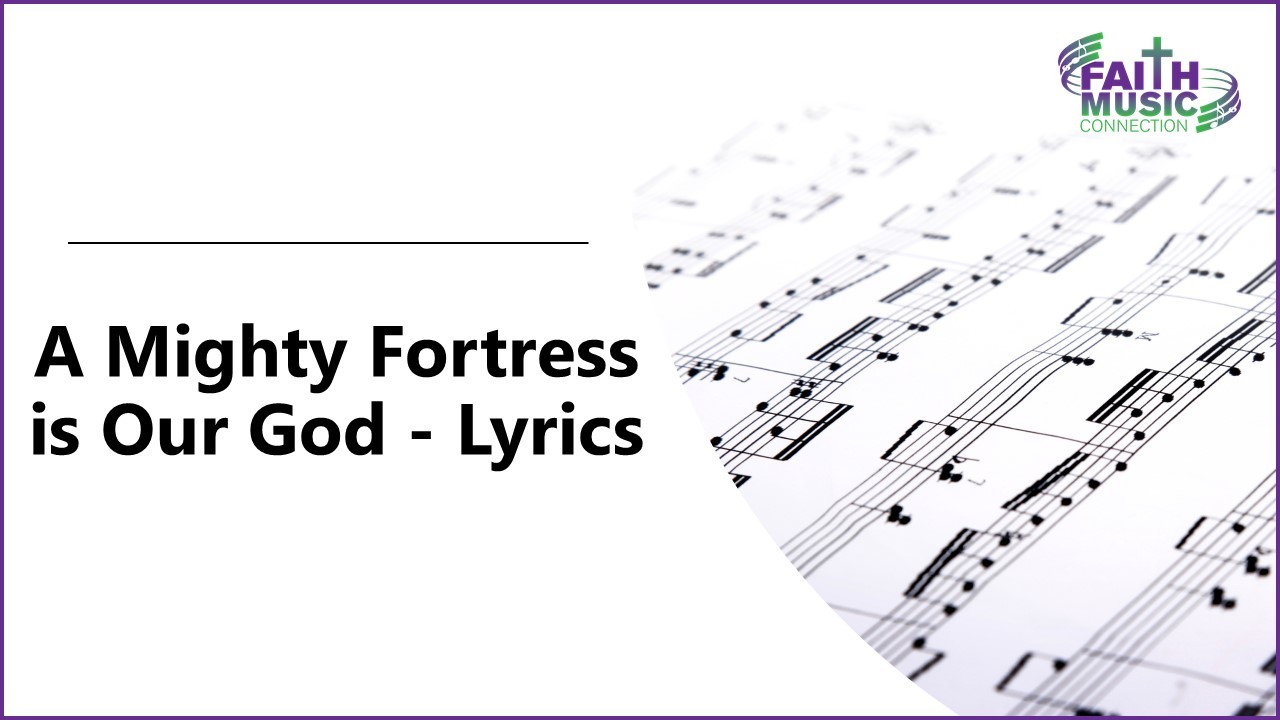 A Mighty Fortress is Our God: Hymn of the Week Radio Show Episode

Reading of A Mighty Fortress is Our God Lyrics

A mighty fortress is our God, a bulwark never failing;
Our helper He, amid the flood of mortal ills prevailing:
For still our ancient foe doth seek to work us woe;
His craft and power are great, and, armed with cruel hate,
On earth is not his equal.

Did we in our own strength confide, our striving would be losing;
Were not the right man on our side, the man of God’s own choosing:
Dost ask who that may be? Christ Jesus, it is He;
Lord Sabaoth, his name, from age to age the same,
And he must win the battle.

And though this world, with devils filled, should threaten to undo us,
We will not fear, for God hath willed his truth to triumph through us:
The Prince of Darkness grim, we tremble not for him;
His rage we can endure, for lo, his doom is sure,
One little word shall fell him.

That word above all earthly powers, no thanks to them, abideth;
The Spirit and the gifts are ours through him who with us sideth:
Let goods and kindred go, this mortal life also;
The body they may kill: God’s truth abideth still,
His kingdom is forever.

And now, let us hear this historic hymn performed by the Mormon Tabernacle Choir with the Philadelphia Orchestra, conducted by Eugene Ormandy.

Background of A Mighty Fortress is Our God

Martin Luther, author and composer of A Mighty Fortress is our God, was born in Eisleben, Saxony, in 1483. In 1505, he abandoned his law studies, which had been pushed on him by his father, to became an Augustinian monk. Two years later, he was ordained a priest and preacher in the Saxon city of Wittenberg. Shortly thereafter, he began to study and teach theology at the University of Wittenberg, where he was awarded a doctorate in 1512.

Luther derived his core beliefs of salvation by faith alone (sola fide) and exclusive reliance on the authority of scripture (sola scriptura) from his studies of the writings of St. Augustine and St. Paul’s Epistle to the Romans . These beliefs clashed with the Catholic Church’s practice of selling indulgences. (An indulgence was a remission of the penalty that a sinner would otherwise owe following absolution.)

In 1517, the church began selling indulgences in Saxony for the purpose of raising funds for renovation of St. Peter’s Basilica in Rome. But, half of the proceeds went to a local bishop and his bankers. Luther sent his famous “95 Theses” to the local church authorities to persuade them to abandon this indulgence campaign. He wrote his argument in Latin, but it was translated and printed into German, leading to a movement by the German nobility encouraging reform of the church . As a result of these developments, he was excommunicated from the church in 1520.

Separation of Church and State

By the mid 1520’s, many German cities and states had officially severed their legal ties with Rome and become Lutheran. Peasants began to attack castles, monasteries and cities to bring about social reform. Luther urged strict separation of worldly and spiritual realms, which lead Lutheran governments to establish laws to that effect.

Luther translated the Bible into German, his monumental literary accomplishment. He encouraged congregational singing and participation in worship, not just in the church, but also in homes and schools.

An excerpt from the writings of Luther gives insight into the importance he placed on hymns:

Good and Pleasing to God

That it is good, and pleasing to God, for us to sing
spiritual songs is, I think, a truth whereof no Christian can
be ignorant; since not only the example of the prophets and
kings of the Old Testament (who praised God with singing and
music, poetry and all kind of stringed instruments) but also
the like practice of all Christendom from the beginning,
especially in respect to psalms, is well known to every one:
yea, St. Paul doth also appoint the same (I Cor. xiv.) and
command the Colossians, in the third chapter, to sing
spiritual songs and psalms from the heart unto the Lord, that
thereby the word of God and Christian doctrine be in every way
furthered and practiced.

Christ, Our Praise and Our Song

Accordingly, to make a good beginning and to encourage
others who can do it better, I have myself, with some others,
put together a few hymns, in order to bring into full play the
blessed Gospel, which by God's grace hath again risen: that we
may boast, as Moses doth in his song (Exodus xv.) that Christ
is become our praise and our song, and that, whether we sing
or speak, we may not know anything save Christ our Savior, as
St. Paul saith (I Cor. ii).

A Mighty Fortress is Our God
translated by Frederick H. Hedge

Luther wrote 37 hymns and paraphrases, including Out of the Depths I Cry to You, From Heaven Above to Earth I Come and Christ Jesus Lay in Death’s Strong Bands. Psalm 46 inspired A Mighty Fortress is Our God, which was published in 1529 in Klug’s Gesangbuch (songbook). 19th-century American German scholar and ordained minister, Frederick H. Hedge, translated the hymn into English. It was published in 1853, in "Hymns for the Church of Christ," edited by Hedge and F. D. Huntington.  Hedge was professor of both ecclesiastical history and German at Harvard University from 1857-1881.

And now we hear our hymn, performed by the Sanctuary Choir of First Baptist Church, Carrollton, Georgia, under the direction of Andrew Frazier.

Martin Luther was an accomplished musician among his many other talents. He composed Ein’ feste Burg (named after the first line of the hymn) in the chorale style. A chorale is a melody, and our hymn was originally sung without harmonization. All classes of Germans in the early 16th century were quite familiar with this style.

Most modern hymnals employ an arrangement and harmonization in four parts by Johann Sebastian Bach. Bach lived about two centuries after Luther, and is revered as one of the greatest composers of church music. Bach, a devout Lutheran, inscribed his compositions with the acronym "SDG" (soli deo Gloria—to God alone be the glory).

Music and the Arts

Luther liked music and the arts and was happy to use them for the edification of youth, as is amplified in the following preface. He wrote, “To the Hymn-book printed at Wittenberg by Joseph Klug, 1543,” the following message.

"These songs have been set in four parts, for no other
reason than because I wished to provide our young people (who
both will and ought to be instructed in music and other
sciences) with something whereby they might rid themselves of
amorous and carnal songs, and in their stead learn something
wholesome, and so apply themselves to what is good, with
pleasure, as becometh the young.

Beside this, I am not of opinion that all sciences should
be beaten down and made to cease by the Gospel, as some
fanatics pretend; but I would fain see all the arts, and music
in particular, used in the service of Him who hath given and
created them.

Therefore I entreat every pious Christian to give a
favorable reception to these hymns, and to help forward my
undertaking, according as God hath given him more or less
ability. The world is, alas, not so mindful and diligent to
train and teach our poor youth, but that we ought to be
forward in promoting the same. God grant us his grace. Amen."

Now, hear Psalm 46, which inspired Martin Luther to create his great hymn, A Mighty Fortress is Our God.

There is a river whose streams make glad the city of God, the holy habitation of the Most High. God is in the midst of the city; it shall not be moved; God will help it when the morning dawns. The nations are in an uproar, the kingdoms totter; he utters his voice, the earth melts. The Lord of hosts is with us; the God of Jacob is our refuge.

Come, behold the works of the Lord; see what desolations he has brought on the earth. He makes wars cease to the end of the earth; (the Lord) breaks the bow, and shatters the spear; he burns the shields with fire. "Be still, and know that I am God! I am exalted among the nations; I am exalted in the earth. The Lord of hosts is with us; the God of Jacob is our refuge."

In the words of Martin Luther, "Now let God's name alone be praised, and our name not sought." Amen.

And now, let us hear our hymn, beautifully performed by John Rutter and the Cambridge Singers.