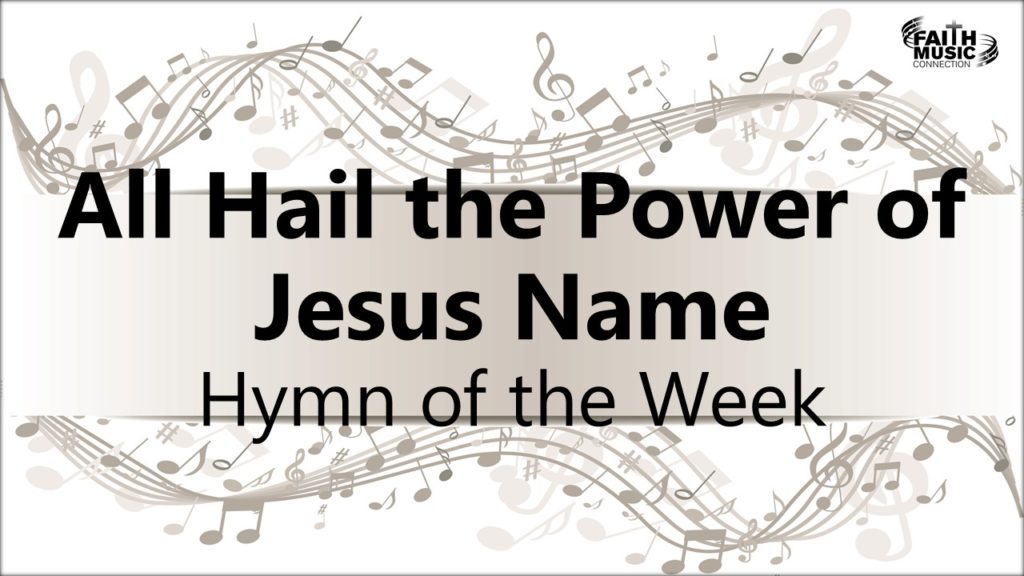 All Hail the Power of Jesus' Name Introduction of The Hymn

This is The Hymn of the Week with Dr. Larry Frazier--presenting the good news in song, combining faith and everyday experience.

So powerful is the connection between words and music that the term, “hymn,” which by definition refers only to poetry—the words—has commonly come to include both words and music. This week’s hymn, All Hail the Power of Jesus’ Name, was written in England during the time of the American Revolution. It was first published paired with a tune from the same period. This hymn is often called, “The National Anthem of Christendom." It has remained so popular that it appears in modern hymnals coupled with as many as three different hymn tunes.

Click Below for All Hail the Power of Jesus' Name Lyrics 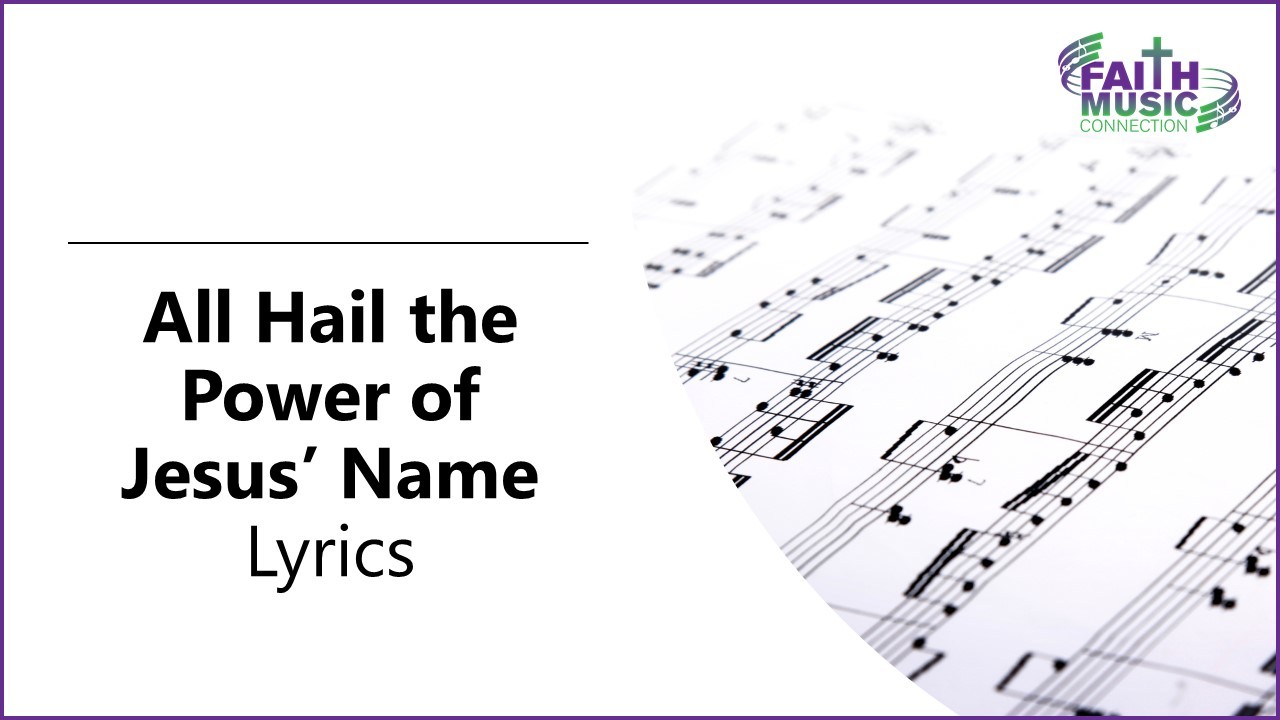 All Hail the Power of Jesus' Name: Hymn of the Week Radio Show Episode

Reading of All Hail the Power of Jesus' Name Lyrics

All hail the power of Jesus’ Name! Let angels prostrate fall;
Bring for the royal diadem, and crown Him Lord of all.

Let highborn seraphs tune the lyre, and as they tune it fall
Before His face Who tunes the choir, and crown Him Lord of all.

Crown Him, ye morning stars of light, who fixed this floating ball;
Now hail the strength of Israel’s might, and crown Him Lord of all.

Crown Him, ye martyrs of your God, who from His altar call;
Extol the Stem of Jesse’s Rod, and crown Him Lord of all.

Ye seed of Israel’s chosen race, ye ransomed from the fall,
Hail Him Who saves you by His grace, and crown Him Lord of all.

Hail Him, ye heirs of David’s line, whom David Lord did call,
The God incarnate, Man divine, and crown Him Lord of all.

Sinners, whose love can ne’er forget the wormwood and the gall,
Go spread your trophies at His feet, and crown Him Lord of all.

Let every tribe and every tongue before Him prostrate fall
And shout in universal song the crown-ed Lord of all.

O that, with yonder sacred throng, we at His feet may fall,
Join in the everlasting song, and crown Him Lord of all!

And now, let us hear the tune, Coronation, performed by The King’s Brass and Tim Zimmerman, and then paired with our powerful hymn sung by the Kansas City Chorale

Background of All Hail the Power of Jesus' Name Hymn

The Church of England officially discouraged congregational singing throughout the eighteenth century. It was a time of great spiritual revival throughout England. Because of a perceived threat to Orthodoxy, Church leaders often punished revivalists including John and Charles Wesley.

The author of All Hail the Power of Jesus’ Name, Edward Perronet was the son of an Anglican clergyman. His Huguenot family came to England from France to escape religious persecution. Like his Father, he was ordained in the Church of England. Ironically his association with Methodists and other evangelical groups brought religious persecution. Consequently, he eventually became pastor of a small independent church in Canterbury.

Perronet’s great hymn was first published paired with the tune Miles Lane in The Gospel Magazine. The first stanza appeared in 1779 and all eight original stanzas a year later in 1780.

The influential London, Baptist minister, John Rippon, revised Peronnet’s verses and added the following stanza of his own:
O that, with yonder sacred throng, we at His feet may fall,
Join in the everlasting song, and crown Him Lord of all!

This version of the hymn was published in London, in 1787 in Rippon’s collection entitled, Selection of Hymns. Perronet was an important figure in this time of revival. Though he wrote several dozen hymns, All Hail the Power is the only one still widely sung today.

And now we hear Miles Lane, by William Shrubsole, the tune originally published with Perronet’s hymn, arranged and performed by pianist Terry Lowry.

More often than not, hymn and hymn tune are written by two different people. Although any hymn may be sung with any tune in the same meter, the pairing of hymn with tune is usually a decision made by the publishers of hymnals. Once published, the quality of the pairing, its relevance in public and private worship and even its popularity may determine whether hymn and tune continue together or whether the hymn is paired with another newer (or sometimes older) tune.

William Shrubsole, a singer and organist, composed Miles Lane, the tune first paired with All Hail the Power of Jesus’ Name, while still a teenager. Like Perronet, Shrubsole was persecuted because of his affiliation with evangelicals, ultimately losing his position as organist of Bangor Cathedral.

Perhaps the most popular tune associated with our hymn is Coronation, by American composer Oliver Holden, a skilled carpenter, businessman, statesman, pastor and talented musician. Holden organized many singing schools and published several collections of hymns. He published Coronation in Boston, in 1793 in his Union Harmony or Universal Collection of Sacred Music. It was originally a fuguing tune, popularized by the 18th century American composer William Billings, a type of musical composition in which the various voice parts enter in imitative texture similar to that of a round, but it appears in modern hymnals in standard, four-part harmony, without counterpoint.

James Ellor composed a third tune, Diadem, in England in 1838, especially for our hymn. Ellor was a hatmaker by trade as well as a Methodist choirmaster. He came to the United States in 1843 and continued his trade and musical interests until his death in 1899.

And now we hear Coronation, beautifully performed by The King’s Brass and Tim Zimmerman.

In hymn singing, Christians affirm and share what they believe. This combination of word and song has been a powerful force for education, personal devotion, motivation for living and spreading the good news and for unity and hope under the lordship of Jesus Christ.

Jesus Christ Lord of All

Though Edward Perronet’s hymn, All Hail the Power of Jesus’ Name, reflects the ideals of the 18th century Age of Enlightenment that the legitimate power of kings—or in the case of our country, leaders elected by the people--to govern is delegated from God above as is the responsibility to govern responsibly. it is also a powerful statement of doctrine of the Christian faith—“God incarnate, Man divine” in the person of Jesus Christ, who, through the cross and resurrection, saves those from every tribe and race by His grace, “crown Him Lord of all.”

All Hail the Power of Jesus' Name has a definite connection to this passage from the New Testament book of Philippians, Chapter 2, verses 9-11. “Therefore God also highly exalted him and gave him the name that is above every name, so that at the name of Jesus every knee should bend, in heaven and on earth, and under the earth, and every tongue should confess that Jesus Christ is Lord, to the glory of God the Father.”

And now, let us hear another arrangement of Coronation performed by the King’s Brass and Tim Zimmerman, followed by a performance of All Hail the Power of Jesus’ Name sung to the tune Diadem, by the Huddersfield Choral Society and Wyn Morris.