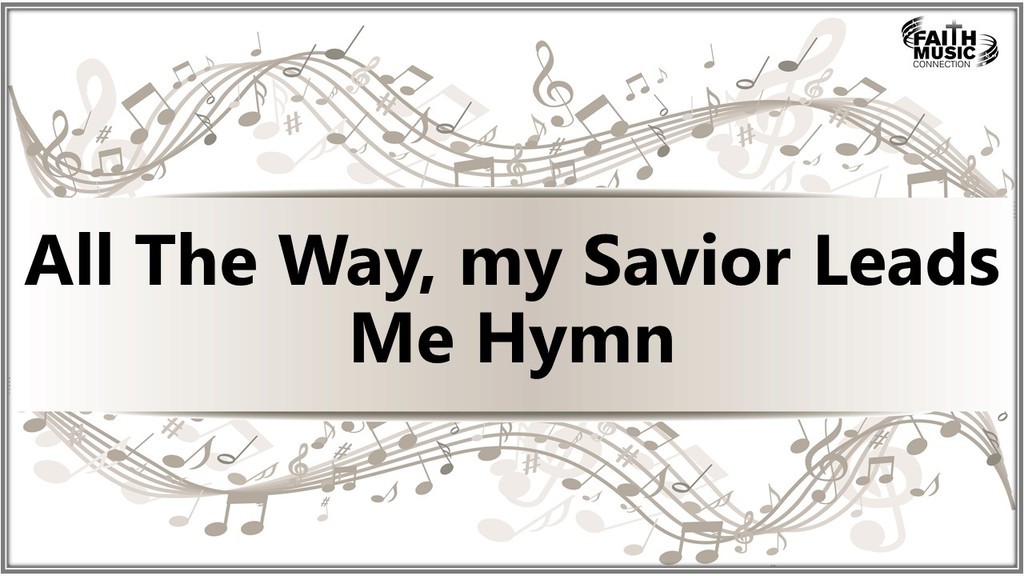 All the Way My Savior Leads Me – Introduction of the Hymn

"All the Way, My Savior Leads Me." This is “The Hymn of the Week” with Dr. Larry Frazier—presenting the good news in song, combining faith and everyday experience.

Welcome to “The Hymn of the Week.” Games between cross-town rivals often produce extraordinarily exciting results and surging emotional responses among players and spectators alike. Giants/Jets, Yankees/Mets and in the 1950’s, Yankees/Giants are examples from professional football and baseball in greater New York City. Any sports fan can point to great high-school rivalries in their hometowns and regions.

Religious rivalries also often produce dramatic results. The Reformation by Protestants from Catholics and the Methodist movement by the Wesleys from the Church of England are examples. The Oxford Movement in 19th-century England concurrent with the great revival movement in the United States is another. And then and now, the deliberations in adopting a new or revised hymnal is yet another.

Interestingly, the English words “competitor” and “co-operate” proceed from similar roots. Competitors depend on the “co-operation” of their opponents to bring forth their best efforts to produce outstanding results.

The collaborative co-operation of a prolific Manhattan Methodist author and Brooklyn Baptist pastor produced a memorable, 19th-century gospel hymn. That hymn, “All the Way, my Savior Leads Me,” is… “The Hymn of the Week!”

Click Below for All the Way, my Savior Leads Me Lyrics 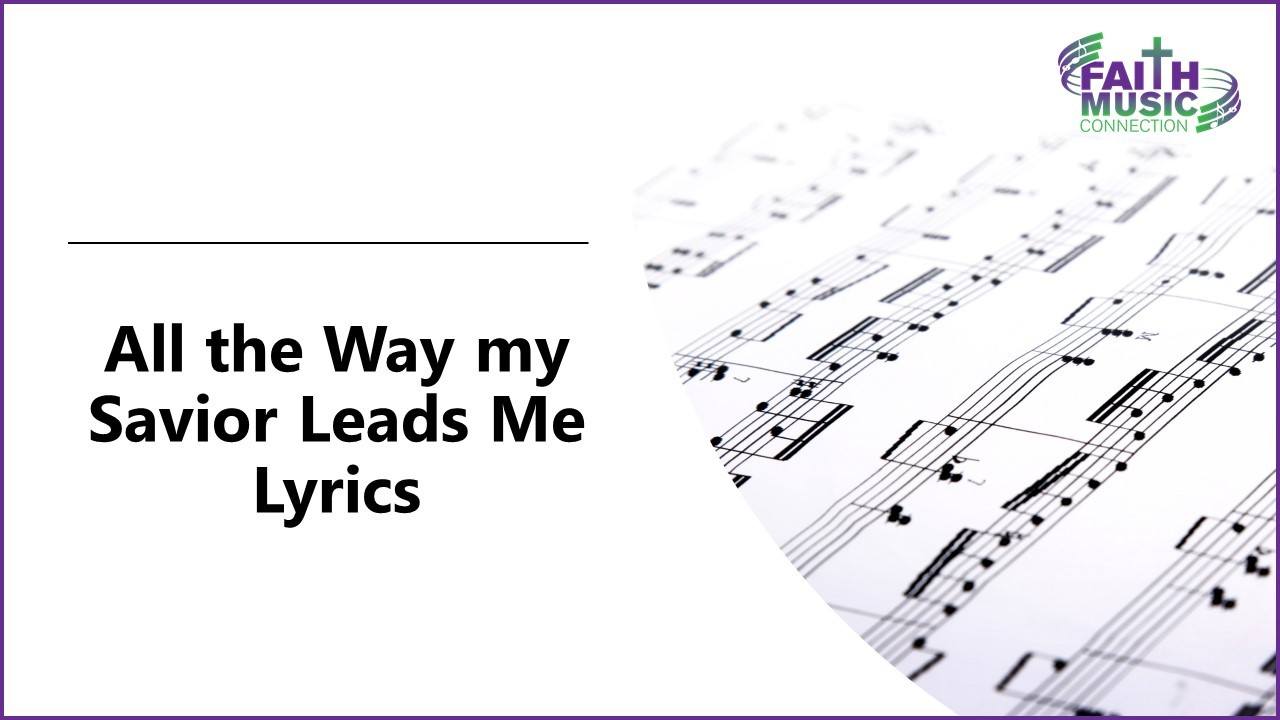 All the Way, my Savior Leads Me: Hymn of the Week Radio Show Episode

Reading of All the Way, my Savior Leads Me Lyrics

Now, let us hear our hymn with the tune, “All the Way,” sung by the Harding University Concert Choir, directed by Dr. Arthur Shearin

Background of All the Way my Savior Leads Me

Born in March of 1820, in the Putnam County town of Southeast, New York, Frances Jane “Fanny” Crosby was blinded at the age of six weeks when a local doctor ill-advisedly tried to relieve inflammation of her eyes with hot poultices. Throughout her life, she never seemed to consider her blindness a handicap; even as a young child she was able to play outdoors with other children, running and jumping and climbing trees or rock walls in the southeastern New York countryside. Her first poem written at the age of eight shows both facility with words and a remarkable attitude:

Oh! what a happy soul I am!
Although I cannot see,
I am resolved that in this world
Contented I will be.
How many blessings I enjoy
That other people don't!
To weep and sigh because I'm blind
I cannot nor I won't.

New York Institute for the Blind

At the age of fifteen, she began studies at the New York Institute for the Blind, in New York City. There, she excelled as a student for seven years. After graduation, she produced her first volume of poetry, published under the title, “The Blind Girl and Other Poems.” In 1847, she returned to the institute as a teacher of English and History, a position she retained for eleven successful years.

She blossomed as a poet and teacher and met many important and influential people who visited the institute. Visitors included William Cullen Bryant, Horace Greely, Henry Clay, Gen. Winfield Scott, U.S. president James K. Polk and future president Grover Cleveland. For a short time, Cleveland served as assistant to the superintendent of the institute.

During her years on the faculty of the institute her religious faith deepened in what she described as her “conversion.” She had always been a church-going Christian and keen student of the Bible, memorizing large portions of scripture from childhood. After this turning point in her life, she turned her poetic talents to writing Christian poetry. In particular, she wrote metrical verses that could be set to music as hymns.

Fanny Crosby collaborated with prominent composers and music publishers such as George F. Root, William H. Bradbury and singing evangelist Philip Phillips. She often produced hymns in less than thirty minutes. Often, she would work for a period of weeks and months on a series of hymns which she would commit to memory. Later, she would write them out, one by one, consecutively, as many as forty at a time!

Fanny Crosby married composer, organist and music teacher Alexander Van Alstyne, in 1858. He, also blind, encouraged her creative talents. Their only child, Frances, died as an infant, but they maintained a 44-year marriage until Alstyne’s death in 1902.

The late 19th and early 20th centuries were times of great spiritual revival and evangelistic fervor in the United States. Fanny Crosby’s spirit and talent were ideally suited for the times. Her hymns of simple and direct expression of personal Christian experience were in great demand by composers and publishers. Published with tunes of simple melodies and harmonic structure, these easily learned and remembered hymns became know as “Gospel Songs.”

Biglow and Main published most of her hymns. This company was a combination of the publishers of two principle compilers of gospel songs, Philip P. Bliss and Ira D. Sankey. Among her many hymns still popular today are “Blessed Assurance,” “Jesus is Tenderly Calling Thee Home,” “Tell Me the Story of Jesus,” “I am Thine, O lord, I Have Heard Thy Voice,” “Jesus, Keep Me Near the Cross,” “Pass Me Not, O Gentle Savior,” “Rescue the Perishing” and “To God be the Glory, Great Things he Hath Done.”

“All the Way, my Savior Leads Me,” came to Fanny Crosby at home as she meditated on the goodness of God. A friend wrote out the verses for her and sent them to Robert Lowry. He quickly composed the
music known as “All the Way.” Robert Lowry and William H. Doane first published hymn and tune in 1875, in the Sunday School collection, “Brightest and Best.”

And now, let us hear our hymn as sung by tenor, Barry Croft.

The ideal music for a gospel hymn included a popular melody that could be easily learned by common people. Simple harmonies and relatively few chord changes supported the melody, which usually included a refrain. Robert Lowry, who composed “All the Way” specifically for our hymn, was born in Philadelphia in 1826. He attended the University of Lewisburg (now Bucknell University) where he excelled as a student of literature and theology. He graduated in 1854 as valedictorian of his class and was then ordained a Baptist minister. Subsequently, Lowry enjoyed a long and successful career as pastor, preacher, author, editor, professor of literature, composer and hymn writer.

Lowry was pastor of Hanson Place Baptist Church, Brooklyn, New York, during much of the decade of the 1860s. During this time, he wrote the words and music of his most famous hymn, “Shall We Gather at the River.” Lowry’s hymn output includes “Nothing but the Blood of Jesus,” “Only One Name” and “Low in the Grave He Lay.” Lowry composed an even larger number of hymn tunes, many of which are still popular today. “Marching to Zion” (sung with Isaac Watts’ “Come Ye that Love the Lord”) includes a refrain that gives the tune its name. “Need” is sung with “I Need Thee Every Hour.” Ironically, Annie Sherwood Hawkes, a member of Hanson Place Baptist while Lowry was pastor, wrote this hymn. He also composed “Something for Jesus,” for “Savior, Thy Dying Love,” by Sylvanus D. Phelps.

And now, let us hear our tune, “All the Way,” arranged and performed by Todd Williams, saxophone.

I am Thine, o Lord, I have heard Thy voice,
And it told Thy love to me;
But I long to rise in the arms of faith,
And be closer drawn to Thee

O the pure delight of a single hour
That before Thy throne I spend,
When I kneel in prayer, and with Thee, my God,
I commune as friend with friend!

Consecrate me now to Thy service, Lord,
By the power of grace divine;
Let my soul look up with a steadfast hope,
And my will be lost in Thine.