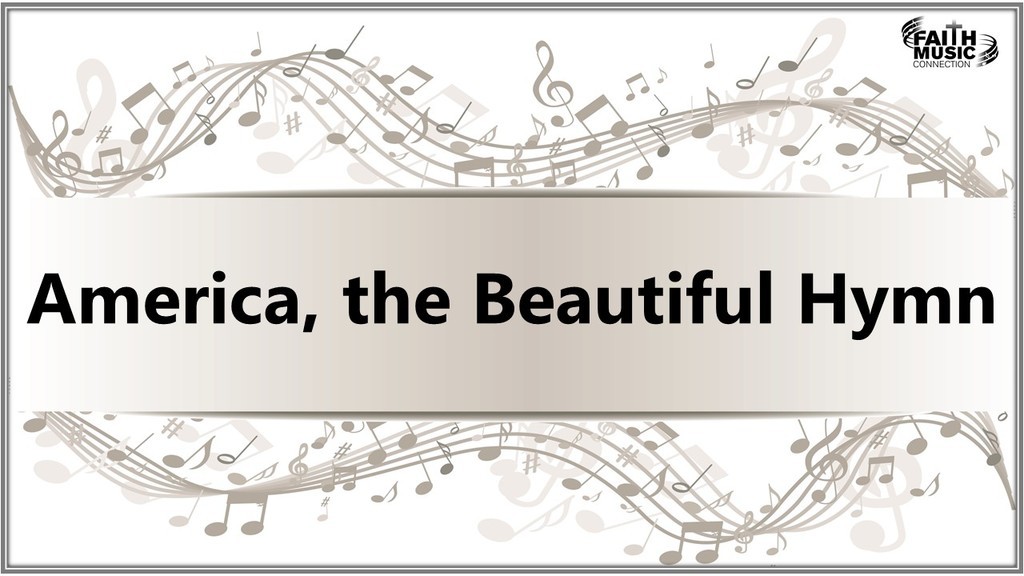 America, the Beautiful– Introduction of the Hymn

Welcome to “The Hymn of the Week.” By 1890, Europe dominated western culture, and its political influence was at its zenith. Europe’s dominance began when Christianity became the official religion of the Roman Empire in the fourth century, A.D. However, currents in the United States were already pointing toward sweeping changes in this old order.

Politically, the United States was poised to become the new dominant world power it became by the mid-20th century. In church music, Lowell Mason’s pioneering efforts in establishing formal music education programs encouraged American hymn writers and composers. By 1890, these artists produced as many new hymns as did their European counterparts.

During this period, a New England English teacher produced a hymn that powerfully touched American political, patriotic and religious sentiments. Today, many urge its establishment as our new national anthem. This hymn— “America, the Beautiful,” is “The Hymn of the Week!” 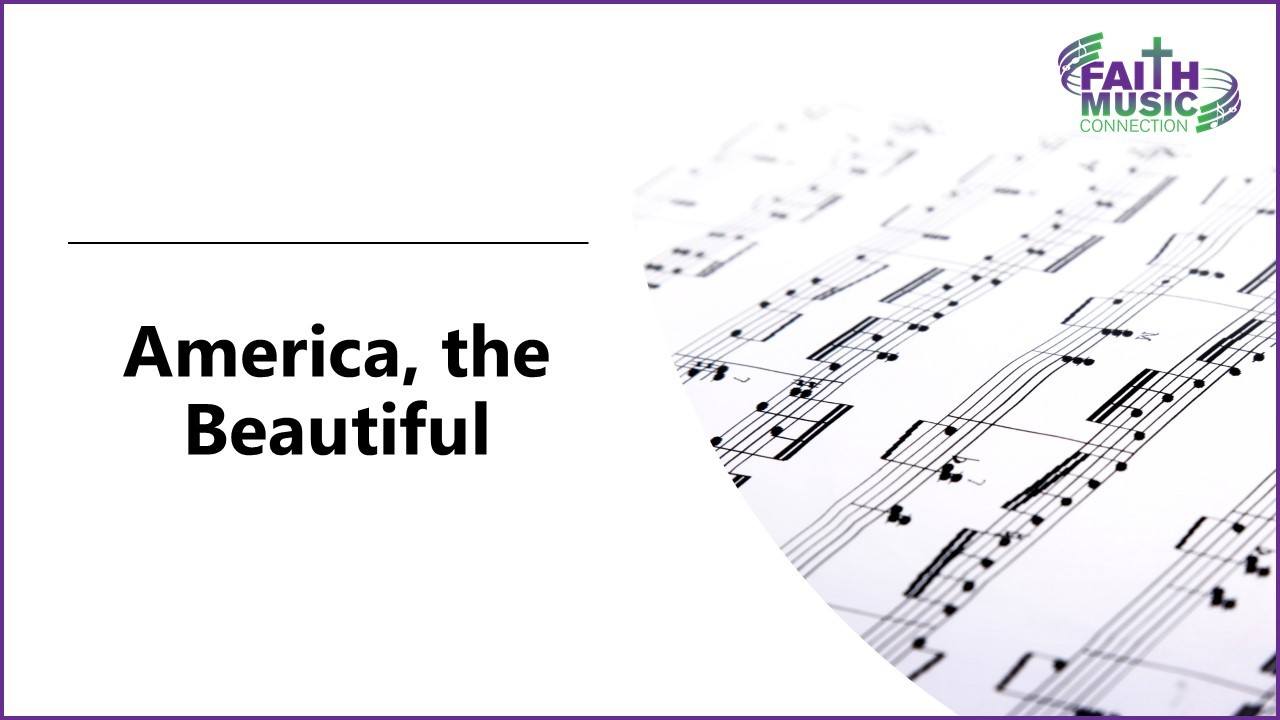 America, the Beautiful: Hymn of the Week Radio Show Episode

Reading of America, the Beautiful Lyrics

O beautiful for spacious skies,
For amber waves of grain;
For purple mountain majesties
Above the fruited plain!
America! America!
God shed His grace on thee,
And crown thy good with brotherhood,
From sea to shining sea.

O beautiful for pilgrim feet,
Whose stern, impassioned stress
A thoroughfare for freedom beat
Across the wilderness!
America! America!
God mend thine every flaw,
Confirm thy soul in self-control,
Thy liberty in law!

O beautiful for heroes proved
In liberating strife,
Who more than self their country loved,
And mercy more than life!
America! America!
May God thy gold refine,
Till all success be nobleness,
And every gain divine.

And now, let us hear our hymn paired with the tune, “Materna,” performed by the Mormon Tabernacle Choir.

Background of America, the Beautiful

Katharine Lee Bates is undoubtedly most famous for her poem, “America, the Beautiful." She was born in Falmouth, Massachusetts, in 1859, daughter of a Congregational minister, who died before her second birthday. Her brothers recognized her intelligence and assured she receive a fine literary education. She earned undergraduate and graduate degrees from Wellesley College, where she later became head of the English department. Professor Bates retained this post for many years until retirement shortly before her death in 1929. She devoted her life’s work to education and to the ideal of literature in revealing and developing values.

The beautiful scenery of Pike’s Peak, Colorado, particularly inspired Katharine Lee Bates during an 1893 summer sabbatical. She jotted some notes into a journal. Interestingly, it was not until two years later that she wrote out the verses of her famous poem. She wonderfully describes the expansive views of mountain, plain and sky. The poem is also a deeply felt literary statement on a country founded on liberty, freedom and self-sacrifice. Bates sees a country blessed with immense natural resources, governed by law, but dependent on the continual blessing of God.

The “Congregationalist Newspaper” first printed “America, the Beautiful,” in 1895. Following several revisions, the “Boston Evening Transcript” first published it nine years later. Ironically, it was not intended to be sung, though its meter is common to many hymns. Though Katharine Lee Bates wrote many other poems and literary works, none approach the popularity of “America, the Beautiful.”

And now, we hear our hymn paired with the tune, “Materna,” performed by the Phoenix Boys Choir followed by the U.S. Army Band.

Samuel Augustus Ward composed the tune “Materna,” now permanently linked to “America, the Beautiful.” Born in Newark, New Jersey, in 1847, he was descended from a continuous line of men of the same name. The first Samuel Augustus Ward was governor of Rhode Island and delegate to the Continental Congress. The latter Ward seems to be the first of his family to demonstrate strong musical talents. He played the accordion at an early age. Later, he studied piano with a close associate of Frederick Chopin and founded a music store in Newark. Thereafter, he became organist of Grace Episcopal Church in Newark, in 1880. Later, he filled several prominent organist positions in the New York metropolitan area.

Ironically, Ward composed “Materna” to be sung with, “O Mother Dear, Jerusalem.” This hymn was written by an author, perhaps a Jesuit priest, known only by the initials “F.B.P.” Ward composed the music on a ferry returning him to Newark after a day on the beach at Coney Island. Charles L. Hutchins first included “Materna” with “O Mother Dear, Jerusalem” in a collection entitled “Church Hymnal,” in 1894.

Pairing of "Materna" with "America, the Beautiful"

The meter of “Materna” is 8.6.8.6.8.6.8.6, which is known as common meter, doubled. “I Sing the Mighty Power of God” and “It Came upon the Midnight Clear” are also in this meter. It was not until 1912, nine years after his death, that Ward’s tune was paired with “America, the Beautiful.” Within a few years this pairing achieved widespread popularity, which has continued to the present. The Songwriters’ Hall of Fame inducted Ward in 1970, primarily in recognition of his tune, “Materna.”

And now, we hear “Materna,” performed by the King’s Brass and Tim Zimmerman.

Consider these words from Psalm 33. “Happy is the nation whose God is the Lord, the people whom he has chosen as his heritage.”

Katharine Lee Bates clearly expresses her belief that the power of U.S. government and institutions comes to the people from God above. Her hymn is also a beautiful prayer.

"America, America, God shed his grace on thee. God mend thine every flaw; thy gold refine. Confirm thy soul in self-control: till selfish gain no longer stain the banner of the free; till souls wax fair as earth and air and music-hearted sea and till all success be nobleness and every gain divine.”

Great but not Good

Bates is reported to have told friends that while many countries may have been great, they failed because they were not good. She feared our country would meet the same fate unless we are willing to crown greatness with goodness and bounty with brotherhood.

May we, individually and collectively, do our part to realize Katharine Lee Bates’ prayer.

And now, let us hear our hymn performed by The Heritage Orchestra.