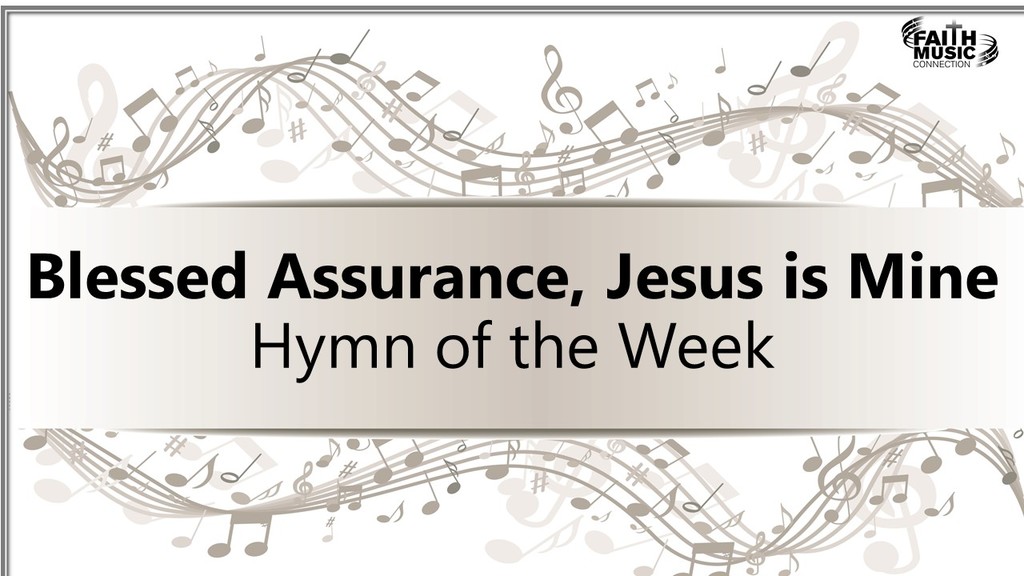 Blessed Assurance Jesus is Mine
Introduction of the Hymn

Welcome to The Hymn of the Week. Record keeping is a way of life in the 21st century. Professional sports records are kept for a myriad of categories—individual goals in a season, number of points scored, total offense and defense, most strikeouts, homeruns, etc.—to document the performance of outstanding players and teams.

Although records for writers of hymns are not formally compiled as in the field of sports, did you ever wonder who wrote the most hymns in a lifetime? The great hymn writer of the Bible, King David, is attributed 150, which are preserved in the Book of Psalms. Isaac Watts, the father of English hymnody wrote several hundred more than that. Charles Wesley, co-founder of the Methodist Church, wrote over 6500 hymns in his lifetime—a record number that stood for over 100 years. However, even that astonishing output was eclipsed by the work of a remarkable American woman, Fanny Crosby. She wrote over 8,000 hymns, an astounding number, surely an all-time record that will never be exceeded. Perhaps none is more widely sung than Blessed Assurance, Jesus is Mine, this week’s The Hymn of the Week.

Click Below for Blessed Assurance Jesus is Mine Lyrics 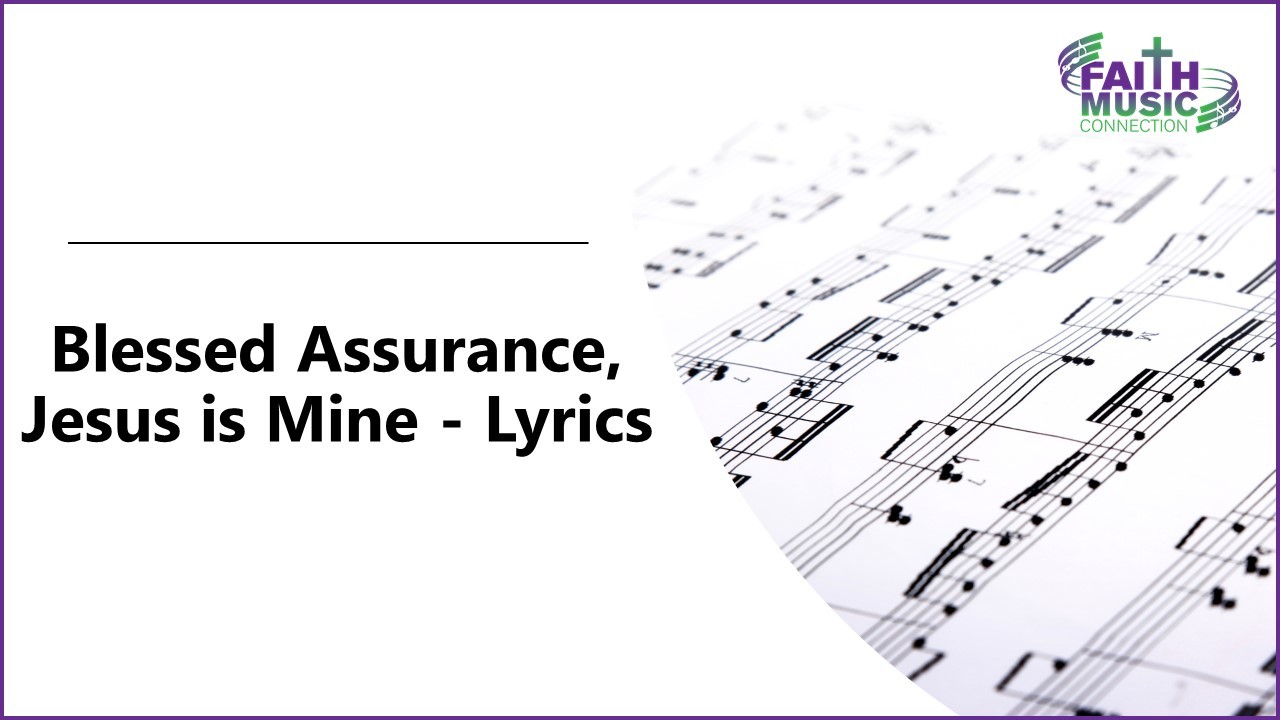 Blessed Assurance, Jesus is Mine:
Hymn of the Week Radio Show Episode

Reading of Blessed Assurance Jesus is Mine Lyrics

Blessed assurance, Jesus is mine!
O what a foretaste of glory divine!
Heir of salvation, purchase of God,
Born of His Spirit, washed in His blood.

Perfect submission, perfect delight,
Visions of rapture now burst on my sight;
Angels descending bring from above
Echoes of mercy, whispers of love.

Perfect submission, all is at rest
I in my Savior am happy and blest,
Watching and waiting, looking above,
Filled with His goodness, lost in His love.

Now, let us hear our hymn with the tune Assurance, beautifully sung by soprano, Leontyne Price, and the Choir of Men and Boys of St. Thomas Episcopal Church.

Background of Blessed Assurance Jesus is Mine

Frances Jane “Fanny” Crosby was born in March of 1820, in the Putnam County town of Southeast, New York. She was blinded at the age of six weeks when a local doctor ill-advisedly tried to relieve inflammation of her eyes with hot poultices. Throughout her life, she never seemed to consider her blindness a handicap. Even as a young child she played outdoors with other children. She loved to run and jump and climb trees or rock walls in the southeastern New York countryside. She wrote her first poem at the age of eight, showing both facility with words and a remarkable attitude.

Oh! what a happy soul I am!
Although I cannot see,
I am resolved that in this world
Contented I will be.
How many blessings I enjoy
That other people don't!
To weep and sigh because I'm blind
I cannot nor I won't.

Student and Teacher at New York Institute for the Blind

At the age of fifteen, she began studies at the New York Institute for the Blind, in New York City. She excelled as a student for seven years. After graduation, she produced her first volume of poetry, published under the title, The Blind Girl and Other Poems.

In 1847, she returned to the institute as a teacher of English and History, a position she retained for eleven successful years. Quickly, she blossomed as a poet and teacher and met many important and influential people who visited the institute. Notable visitors included William Cullen Bryant, Horace Greely, Henry Clay, Gen. Winfield Scott, U.S. president James K. Polk and future president Grover Cleveland. For a short time, Cleveland was an assistant to the superintendent of the institute.

During her years on the faculty her religious conviction and faith deepened in what she described as her “conversion.” She had always been a church-going Christian and keen student of the Bible, having memorized large portions of scripture from childhood; but after this turning point in her life, she turned her poetic talents to writing Christian poetry—specifically, metrical verses that could be set to music as hymns.

Fanny Crosby began to collaborate with prominent composers and music publishers such as George F. Root, who before coming to New York, had assisted Lowell Mason as a music teacher in the public schools of Boston, William H. Bradbury and the singing evangelist Philip Phillips. She often produced hymns in less than thirty minutes. Frequently, she would work for a period of weeks and months on a series of hymns which she would commit to memory. Later, she would write out, one by one, consecutively, as many as forty at a time!

She married composer, organist and music teacher Alexander Van Alstyne, in 1858. He, also blind, encouraged her creative talents, and though their only child, Frances, died as an infant, they had a happy, 44-year marriage until his death in 1902.

The late 19th and early 20th centuries were times of great spiritual revival and evangelistic fervor in the United States. Fanny Crosby’s spirit and talent were ideally suited for the times. Her hymns of simple and direct expression of personal Christian experience and salvation were in great demand by composers and publishers. Published with tunes of simple melodies and harmonic structure, these easily learned and remembered hymns became know as “Gospel Songs.”

The Biglow and Main Company published most of her hymns. This publishing company was a partnership of two principle compilers of gospel songs, Philip P. Bliss and Ira D. Sankey. Among her many hymns still popular today are All the Way My Savior Leads Me paired with a tune by Robert Lowry; Jesus is Tenderly Calling Thee Home with a tune by George Stebbins,Tell Me the Story of Jesus with a tune by John R. Sweney and I am Thine, O Lord, I Have Heard Thy Voice, Jesus, Keep Me Near the Cross, Pass Me Not, O Gentle Savior, Rescue the Perishing and To God be the Glory, Great Things he Hath Done, all to tunes by William H. Doane.

A Tune for Blessed Assurance Jesus is Mine

Fanny Crosby wrote Blessed Assurance, Jesus is Mine to the tune Assurance, by her good friend Phoebe P. Knapp. Both women were members of John Street Methodist Church in New York City.

And now, let us hear the tune, beautifully arranged and performed by pianist Terry Lowry.

The ideal music for a gospel hymn text included a popular melody, usually with a refrain that could be easily learned and remembered.  Simple harmonies and relatively few changes of chord supported these melodies.

Phoebe Palmer Worrall was born in 1839, daughter of prominent Methodist evangelists. At the age of 16 she married Joseph Fairfield Knapp, president of the Metropolitan Life Insurance Company. The couple joined the John Street Methodist Church in New York City, of which Fannie Crosby was a member.

"It Says Blessed Assurance Jesus is Mine"

Phoebe Knapp composed the music for over 500 gospel songs, but it is for her tune “Assurance” that she is remembered today. Fanny Crosby, in describing the circumstances of how she wrote Blessed Assurance, is reported to have said that her friend, Mrs. Joseph F. Knapp, composed a melody and after playing it over for her two or three times on the piano, asked what the music said. She answered, “it says Blessed Assurance, Jesus is Mine!” and quickly wrote out all three stanzas with refrain. The women remained close friends until Phoebe Knapp’s death in 1908.

And now we hear Mrs. Knapp’s tune, Assurance, as played by The Raleigh Ringers.

Fanny Crosby was one of the most famous, well-respected women of the 19th and early 20th centuries. She received numerous accolades. At a meeting of evangelists, one preacher spoke what many probably felt, “What a pity that the Master did not give you sight when He showered so many other gifts upon you.” She quickly replied that had she been able to make one petition at birth if would have been that she should be born blind. “But Why?” asked the stunned preacher. She immediately responded, “Because when I get to heaven, the first face that shall ever gladden my sight will be that of my Savior.”

On another occasion, she recited a poem that described her personal faith.

Someday the silver cord will break,
and I no more as now shall sing;
but oh, the joy when I shall wake
within the palace of the King!
And I shall see Him face to face,
and tell the story--saved by grace!

Now, let us hear our hymn sung by your narrator and host, Dr. Larry Frazier, accompanied by pianist Terry Lowry.

Previous Post Blessed Assurance, Jesus is Mine Lyrics Next Post Oh What a Happy Soul I Am