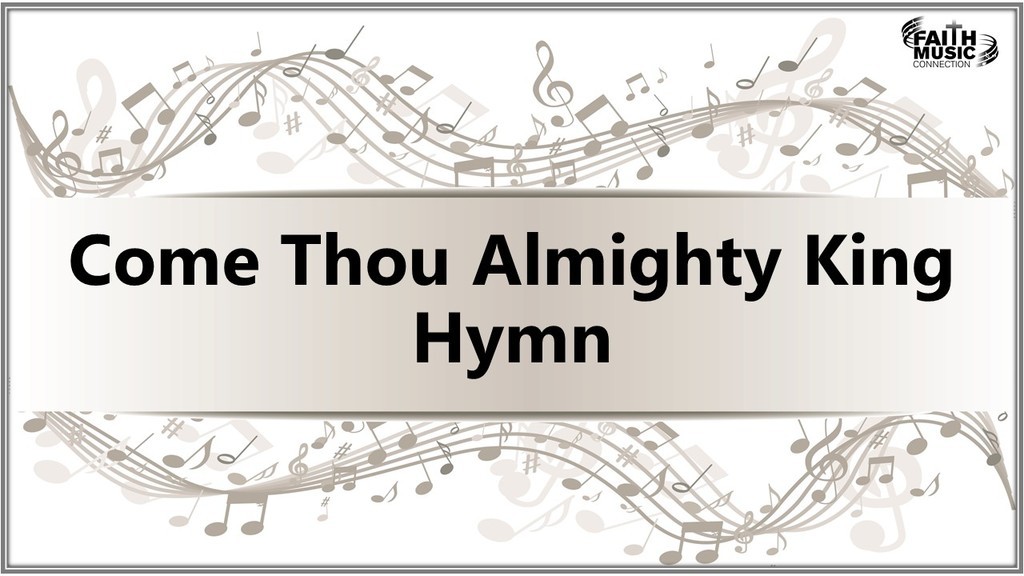 Come, Thou Almighty King– Introduction of the Hymn

On a calm Sunday morning early in 1783, a congregation of Christians gathered, as usual, for Sunday worship. Their church was on Long Island, New York, not far from New York City. Like all Americans throughout the thirteen colonies, these worshippers were aware of sporadic armed conflicts throughout the land. The occasional skirmishes off the coast between American privateers and British ships were closer to their homes. But for the most part, the war left their everyday lives relatively unchanged.

A small group of British soldiers burst into the church during the service, rudely shattering any complacency these patriotic Christian worshippers may have felt. Their captain stormed to the front of the church and demanded that the entire congregation stand and sing, “God Save the King.” After the organist played an introduction, the congregation spontaneously and heartily sang a different hymn to the familiar tune. That hymn, "Come, Thou Almighty King," is…”The Hymn of the Week!” 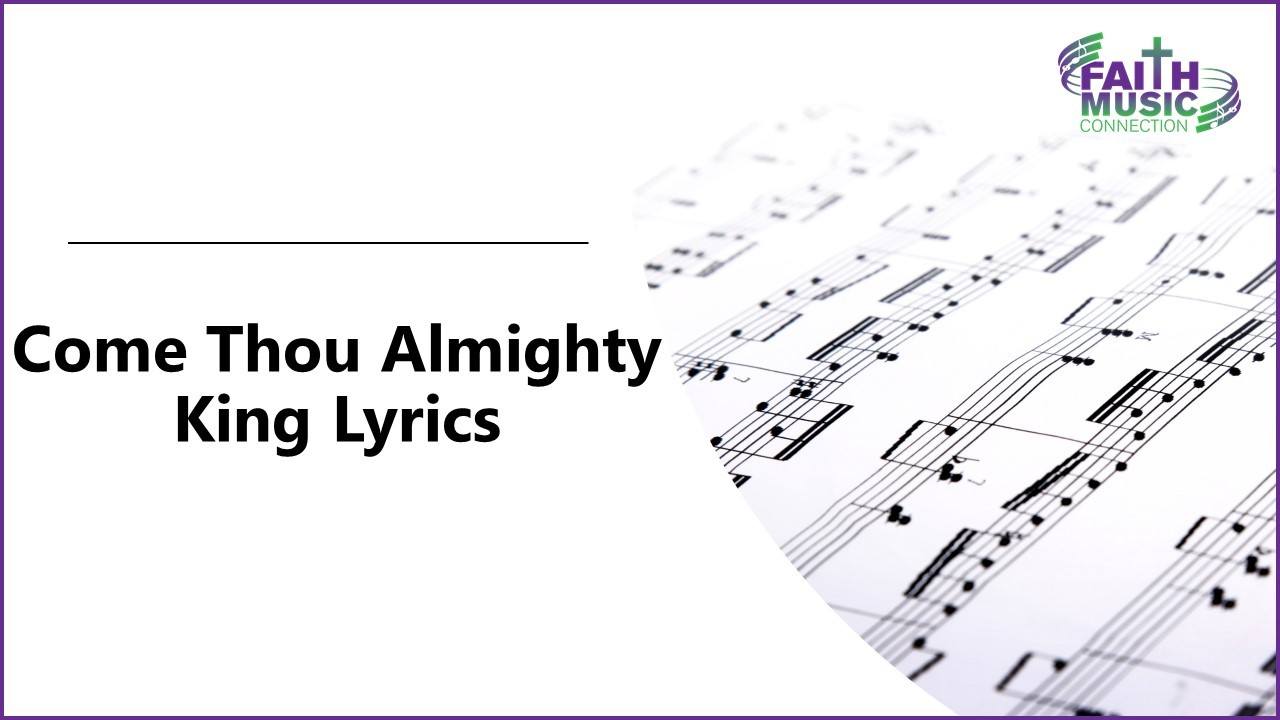 Come, Thou almighty King,
Help us Thy Name to sing, help us to praise!
Father all glorious, o’er all victorious,
Come and reign over us, Ancient of Days!

Jesus, our Lord, arise,
Scatter our enemies, and make them fall;
Let Thine almighty aid our sure defense be made,
Souls on Thee be stayed; Lord, hear our call.

Come, Thou incarnate Word,
Gird on Thy mighty sword, our prayer attend!
Come, and Thy people bless, and give Thy Word success,
Spirit of holiness, on us descend!

Come, holy Comforter,
Thy sacred witness bear in this glad hour.
Thou Who almighty art, now rule in every heart,
And ne’er from us depart, Spirit of power!

To Thee, great one in Three
Eternal praises be, hence, evermore.
Thy sovereign majesty may we in glory see,
And to eternity love and adore!
And now, let us hear our hymn, performed by the Abilene Christian University Choir.

Background of Come, Thou Almighty King

John Wesley and other 18th-century evangelical preachers in England, realized the importance of music to win converts. Beginning in 1737, he published hymns in a series of pamphlets of just a few pages for use in his evangelistic services. He published many of the over 6,500 hymns written by his brother Charles in this manner. In 1757, “Come, Thou Almighty King” first appeared in one of these pamphlets, together with a hymn by Charles Wesley. George Whitefield also included “Come Thou, Almighty King” in collections of hymns published in 1757, 1759 and 1760. None of these publications indicated an author for this hymn.

Some authorities attribute authorship to Charles Wesley because it was first published with one of his hymns. However, this seems unlikely. First, Wesley never claimed authorship. Second, it is not included in any of the older hymnals used by English Methodists. Third, the hymn is in a meter not used in any of the other hymns by Wesley.

Andrew Law first published this hymn in America, in Cheshire, Connecticut, 1783, in his "Collection of Hymns for Social Worship." Law was the grandson of a colonial governor of Connecticut and was a prominent composer and music teacher. Although he included hymns from British and American sources, he did not list an author for "Come, Thou Almighty King." The hymn remains anonymous today, though it continues to be quite popular.

And now, let us hear “Italian Hymn,” the tune most often paired with “Come, Thou Almighty King,” performed by the Raleigh Ringers.

Though the author of “Come, Thou Almighty King” is unknown, there is no question that worshippers first sang it to the tune, “America.” “Gentleman’s Magazine” first published it in October 1735, to the words, “God save great George, our king.”

In 1769, Martin Madan first published our hymn with “Italian Hymn,” the tune with which it is universally associated today. Madan included this pairing in a collection of Psalm and hymn tunes to benefit Lock Hospital, Hyde Park, London. He named the tune after Italian composer, Felice de Giardini (1710-1796), a native of Turin, Italy. Giardini had come to London to manage the “Haymarket Comic Opera.”

“Italian Hymn” is in the rather unusual meter of 6.6.4.6.6.6.4. “My Country ‘tis of Thee” with the tune, “America,” and “My Faith Looks Up to Thee,” paired with “Olivet,” are also in this meter. The tunes suggest contrasting moods. “Olivet” is in a rather slow, quadruple meter with four beats to each measure of music. “Italian Hymn” features a strong and brisk triple meter with three beats to each measure, symbolic of the Trinity. Both tunes well fit the hymns with which they are paired. It is theoretically possible to sing either hymn with either tune. However, it is clearly apparent why they appear with the tunes with which we are accustomed.

A concert violinist known throughout Europe, Giardini was a popular and charismatic figure in London. The English almost immediately accepted his “Italian Hymn” as the preferred tune for “Come, Thou Almighty King.” Andrew Law also used this tune in his collection marking the first appearance of the hymn in an American publication.

“Italian Hymn” is also known by the names “Trinity,” after the subject of our hymn, and “Moscow,” where Giardini died. (He was less successful as an opera manager than as a musician and composer. After the failure of the Haymarket Opera, he left London to take a similar position with an opera company in Moscow.)

Opera and church music may not seem to readily mix. However, George Beverly Shea, noted soloist with the Billy Graham Evangelistic Association, successfully worked both fields. Others include Leontyne Price, Metropolitan Opera soprano, and your “Hymn of the Week” host, who directed a university opera program.

And now, we hear “Italian Hymn,” arranged and performed by pianist John Innes.

“Come, Thou Almighty King” is a confident statement of faith in God—Father, Son and Comforter—who is King over all. For liturgical churches, it is appropriately sung on Trinity Sunday and for general use as a hymn of praise. The hymn connects well with the farewell prayer of King David as recorded in I Chronicles. “Yours, O Lord, are the greatness, the power, the glory, the victory and the majesty. For all that is in the heavens and on the earth is yours. Yours is the kingdom, O Lord, and you are exalted as head above all. Riches and honor come from you, and you rule over all. In your hand are power and might, and it is in your hand to make great and to give strength to all. And now, our God, we give thanks to you and praise your glorious name.”

There is also in our hymn a strong allusion to the apocalyptic vision of Revelation 19. “Then I saw heaven opened, and there was a white horse! Its rider is called Faithful and True, and in righteousness he judges and makes war. His eyes are like a flame of fire, and on his head are many diadems. And he has a name that no one knows but himself. He is clothed in a robe dipped in blood, and his name is called The Word of God. And the armies of heaven, wearing fine linen, white and pure, were following him on white horses.

From his mouth comes a sharp sword with which to strike down the nations. And he will rule them with a rod of iron. He will tread the wine press of the fury of the wrath of God the Almighty. On his robe and on his thigh, he has a name inscribed, ‘King of Kings and Lord of Lords.’”

Our unknown hymn author beautifully connects these two passages of scripture in the final two stanzas of our hymn.

“Come, holy comforter,
Thy sacred witness bear in this glad hour.
Thou Who almighty art, now rule in every heart,
And ne’er from us depart, Spirit of power!

To Thee, great One in Three,
Eternal praises be, hence, evermore.
Thy sovereign majesty may we in glory see,
And to eternity love and adore!

And now, let us hear our hymn performed by the Canadian Brass and the Elmer Isder Singers.