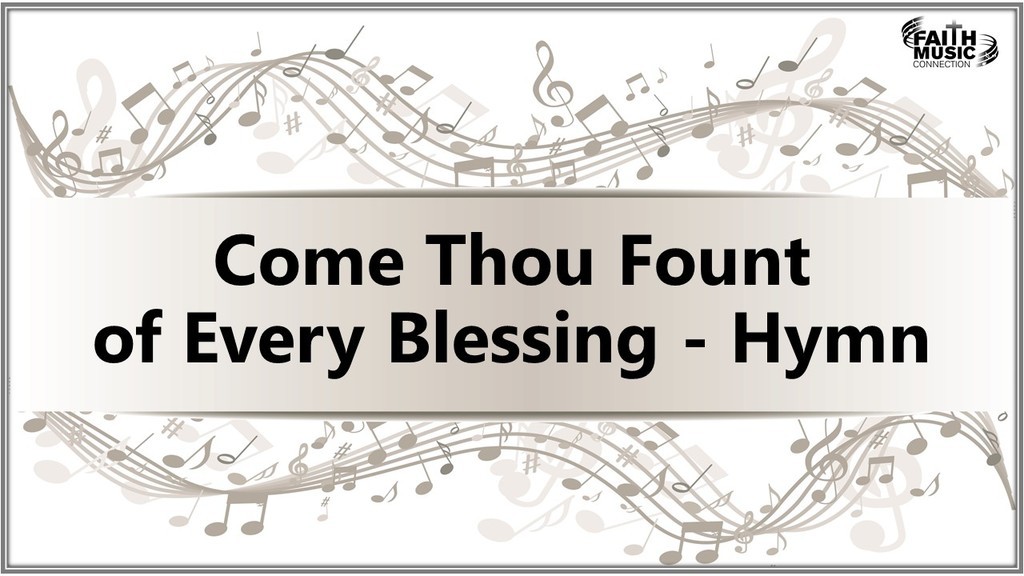 Come Thou Fount of Every Blessing – Introduction of the Hymn

Welcome to “The Hymn of the Week.” In 18th-century England, a newly-widowed mother prays that her intelligent, book-loving, 10-year old son would someday become an Anglican priest. Of limited social standing and financial means, she reluctantly apprentices him at age 14 to a London barber and hairdresser.

Several years later, strange encounters with an old fortune teller and a great evangelist set into motion a series of events. As a result, the boy became a respected author, theologian, historian and preacher. Ironically, his mother’s prayer was not directly realized. Instead of becoming an Anglican priest, he became a Methodist minister. Later, he pastored an Independent (Calvinistic) church and finally, pastored a prominent Baptist church in Cambridge.

Such are the highlights of the life of Robert Robinson, author of “Come Thou Fount of Every Blessing—"The Hymn of the Week!”

Click Below for Come Thou Fount of Every Blessing Lyrics 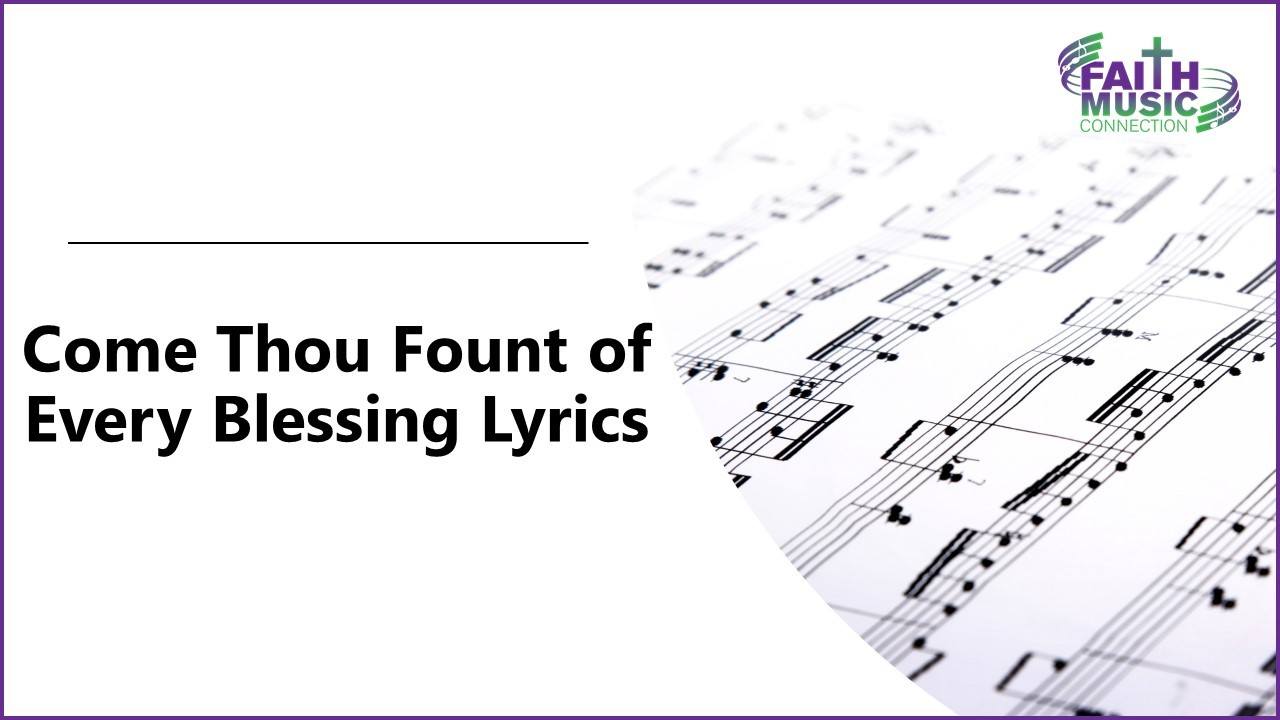 Come Thou Fount of Every Blessing: Hymn of the Week Radio Show Episode

Reading of Come Thou Fount of Every Blessing Lyrics

Come, Thou fount of every blessing,
Tune my heart to sing Thy grace;
Streams of mercy, never ceasing,
Call for songs of loudest praise.
Teach me some melodious sonnet,
Sung by flaming tongues above.
Praise the mount! I’m fixed upon it,
Mount of Thy redeeming love.

Here I raise my Ebenezer;
Here by Thy great help I’ve come;
And I hope, by Thy good pleasure,
Safely to arrive at home.
Jesus sought me when a stranger,
Wandering from the fold of God;
He, to rescue me from danger,
Interposed His precious blood.

Sorrowing I shall be in spirit,
Till released from flesh and sin,
Yet from what I do inherit,
Here Thy praises I’ll begin;
How His kindness yet pursues me
Mortal tongue can never tell,
Clothed in flesh, till death shall loose me
I cannot proclaim it well.

O to grace how great a debtor
Daily I’m constrained to be!
Let Thy goodness, like a fetter,
Bind my wandering heart to Thee.
Prone to wander, Lord, I feel it,
Prone to leave the God I love;
Here’s my heart, O take and seal it,
Seal it for Thy courts above.

O that day when freed from sinning,
I shall see Thy lovely face;
Clothèd then in blood-washed linen
How I’ll sing Thy sovereign grace;
Come, my Lord, no longer tarry,
Take my ransomed soul away;
Send Thine angels now to carry
Me to realms of endless day.

And now, let us hear the tune, “Nettleton,” performed by the choirs of the Cathedral of St. Philip, Atlanta, Georgia, with organist David Fishburn and conductor Craig Cansler.

Background of Come Thou Fount of Every Blessing

Robert Robinson was born in 1735 in Swaffham, Norfolk, England, to parents of humble means. He attended Latin school when he was eight. His father died two years later, and his mother reluctantly apprenticed Robert, at the age of 14, to a London barber and hairdresser. However, nearing completion of the apprenticeship, his master, noticing his preference for books over tonsorial duties, released him from his indenture.

On a Sunday afternoon in 1752, Robinson and some friends plied an old fortune-telling woman with drink, so they could make fun of her predictions. With fixed gaze she told Robinson that, unlike his friends, he would live to see his children and grandchildren. Startled, he was struck with the purpose-less life he was leading. That night, he decided to go to hear the preaching of the great evangelist George Whitefield. Much moved by Whitefield’s sermon, he spent the next three years in reading and study, during which time his faith developed and deepened. Subsequently, he worked as an assistant to John Wesley and other evangelical preachers.

In 1758, at age 23, Robinson was called as pastor for the Methodist chapel at Mildenhall, Norfolk. There, he wrote “Come Thou Fount of Every Blessing” as a hymn-poem to conclude a sermon he prepared for Whitsunday (Pentecost).

Writing a hymn to conclude sermons was a common practice of 18th-century clergy in England. The best of these hymns were often published—usually without tunes—in various collections that were quite popular among English Christians. They were typically sung to popular Psalm tunes of the late 17th and early 18th-centuries.

Such was the case with our hymn, which was first published in 1759, in “A Collection of Hymns Used by the Church of Christ in Angel Alley, Bishopsgate.” In the second stanza, the words, “Here I raise my Ebenezer,” refer to a passage from the Old Testament book of First Samuel, which cites “Ebenezer” as the Hebrew word meaning “stone of help.” Our hymn first appeared in the United States in a collection published in Germantown, Pennsylvania, in 1791.

Robinson left the chapel at Mildenhall after only a few months to accept a call as pastor of an Independent (Calvinistic) church in Norwich. In January 1759, he accepted a call to supply the pulpit at Stone Yard Baptist Church, Cambridge. Two years later, he became pastor, serving until his retirement, a few months before his death in 1790.

Though self-educated, Robert Robinson earned wide respect as preacher and scholar. His books include “History and Mystery of Good Friday, published in 1777, and “History of Baptism and Baptists,” published in 1790. In addition to “Come Thou Fount of Every Blessing,” he is also known for his hymn, “Mighty God, While Angels Bless Thee.” This hymn is often paired with the tune “Autumn,” by François Barthélémon.

And now, we hear “Nettleton,” a tune often paired with our hymn, performed by The King’s Brass and Tim Zimmerman.

“Nettleton,” the tune today perhaps most often paired with “Come Thou Fount of Every Blessing,” first appeared in an 1813 collection by John Wyeth. Entitled “Repository of Sacred Music, Part Second,” it was designated by the name “Hallelujah.” Sometimes, “Nettleton” is attributed to the great American evangelist, Asahel Nettleton, who lived from 1783-1844. Although Nettleton compiled hymns for use in his evangelistic services, there is no evidence that he had musical training or that he wrote any hymn tunes.

“Nettleton” is a tune in triple meter. Modern hymnals sometimes include our hymn paired with the tune “Warrenton.” A tune with this name appeared in the 1844 edition of “The Sacred Harp,” published by B. F. White and Elisha James in Philadelphia. However, some authorities believe “Warrenton” originated in England in the mid-18th century, possibly combining four-line stanzas with a four-line refrain—a “dialogue hymn.” In the final analysis, the composers of both tunes remain anonymous.

Meter of Tunes Nettleton and Warrenton

In decided contrast to the triple meter of “Nettleton,” “Warrenton” is usually arranged in patterns of four beats per measure. In modern hymnals the hymn is effectively paired with either tune, as the meter of the text remains 8.7.8.7. doubled.

And now, let us hear both tunes, beautifully arranged and improvised by pianists Terry Lowry, Sr. and Terry Lowry, Jr.

The life of Robert Robinson is one of faith and commitment. Though self-educated, Robinson seems neither arrogant nor overly humble. In “Come Thou Fount of Every Blessing,” he demonstrates knowledge of scripture and of Hebrew with his skillful poetic reference to “Ebenezer.” The first stanza contains some beautiful musical metaphors of spiritual experience: “Tune my heart to sing thy grace.” The finest concert grand piano in the hands of an expert tuner may be prepared for exquisitely beautiful sounds when played by a great artist. Conversely, the same instrument, when out of tune or tune improperly, can sound “like the devil.” Continuing with the first stanza, “Streams of mercy, never ceasing, call for songs of loudest praise. Teach me some melodious sonnet, sung by flaming tongues above.” What a powerful statement of the coming of the Holy Spirit at Pentecost!

Obviously aware of what may be described as his conversion experience, Robinson seems to not take for granted the need to stay connected to God.

“Jesus sought me when a stranger,
Wandering from the fold of God;
He, to rescue me from danger,
Interposed His precious blood;

O to grace how great a debtor
Daily I’m constrained to be!
Let Thy goodness, like a fetter,
Bind my wandering heart to Thee.
Prone to wander, Lord, I feel it,
Prone to leave the God I love;
Here’s my heart, O take and seal it,
Seal it for Thy courts above.”

Thank you, God, for the inspiring life of Robert Robinson and for the gift of his great hymn!

And now, let us hear our hymn, performed by the Mormon Tabernacle Choir.