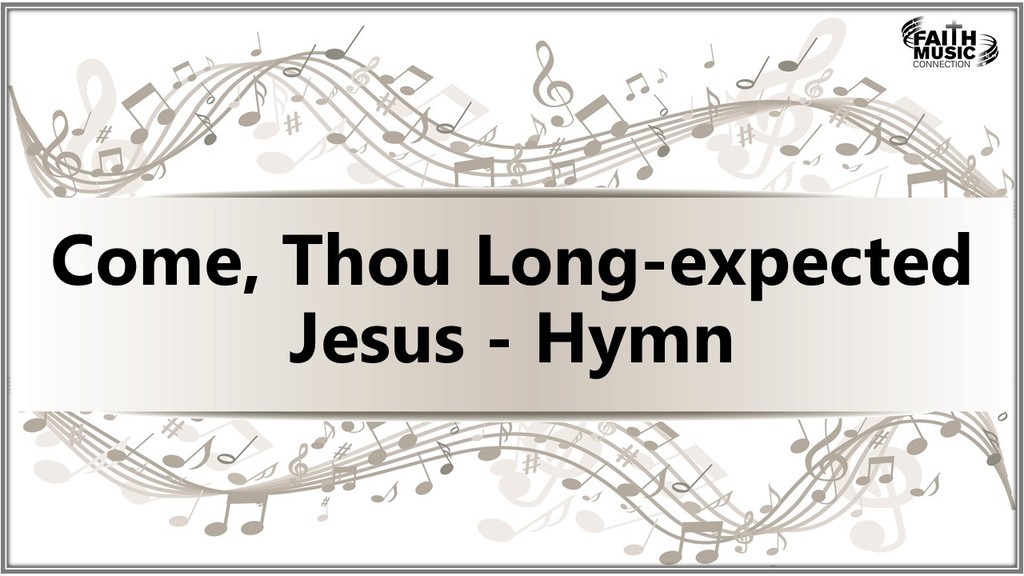 Come  Thou Long-expected Jesus
Hymn of the Week

This is the Hymn of the Week with Dr. Larry Frazier—presenting the good news in song, combining faith and everyday experience.

Preparations for Christmas now begin well before Thanksgiving. For many businesses, sales in the weeks before Christmas make up a majority of receipt for the entire year.

After Halloween, Christmas decorations and advertisements begin to appear, increasing exponentially through Christmas Eve. Almost everyone is caught up in the hustle and bustle of events of the season.

Christians have traditionally prepared for Christmas through self-reflection, prayer and special services of worship. Beginning with the fourth Sunday before Christmas, liturgical churches refer to this as the season of Advent. The incarnation of God in the baby Jesus is a central event of Christianity. Ironically, there are relatively few hymns written for this season of the church year.

One of the greatest hymns for this season was written by a giant hero of the faith, Charles Wesley. He wrote over 6,500 hymns among his over 9,000 poetic works. His great Advent hymn, Come Thou Long-expected Jesus, is The Hymn of the Week! 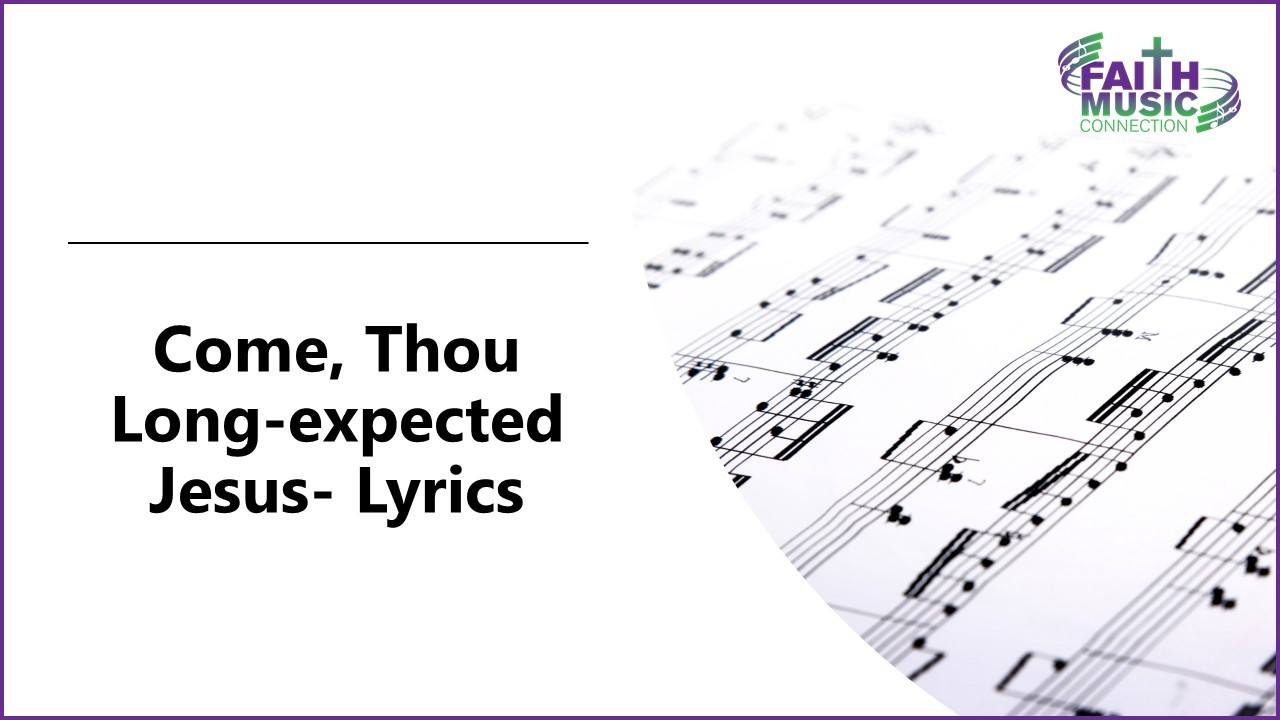 Come Thou Long-expected Jesus: Hymn of the Week Radio Show

Come, thou long-expected Jesus
Born to set thy people free;
From our fears and sins release us,
Let us find our rest in thee.

Israel’s strength and consolation,
Hope of all the earth thou art;
Dear desire of every nation,
Joy of every longing heart.

Born thy people to deliver,
Born a child and yet a king,
Born to reign in us forever,
Now thy gracious kingdom bring.

By thine own eternal spirit
Rule in all our hearts alone;
By thine all-sufficient merit,
Raise us to thy glorious throne.

And now, let us hear our hymn, first sung to the tune Cross of Jesus by the Choir of St. John’s College, Cambridge, followed by the Scottish Festival Singer singing it to the tune Stuttgart.

Background of Come
Thou Long-expected Jesus

Come Thou Long-expected Jesus first appeared in a collection by Charles Wesley, Hymns for the Nativity of our Lord. Published in London, in 1745, he wrote these hymns for congregational singing and personal reading during the season of Advent. Wesley desired to encourage preparation and renewed conviction of faith in preparation for Christmas. Subsequently, twenty-four editions of this collection were published during his lifetime.

Charles Wesley was born at Epworth, Lincolnshire, England, on December 18, 1707. He was a fragile, tiny baby, the eighteenth of nineteen children of a poor, Church of England clergyman and his long-suffering wife. Nine of the couple’s previous children died in infancy. Because of this experience his mother feared that this boy, born several weeks premature, would also not survive.

Wesley continued his studies at Christ Church College, Oxford. After graduation he became a tutor. In 1727, he founded an organization for students upholding the highest standards of academic practice and morality in personal conduct. These standards were in accord with those laid down in statutes of the University.

They were also quite similar to those inculcated in him from an early age by his mother. The group became known as the “Holy Club.” Members were called “Methodists” because of their method of study and practice.

The study of Christian theology was a core academic discipline at 18th-century English and American universities. Indeed, an early brochure from Harvard describes the mission of the institution as follows: “To advance learning and perpetuate it to posterity; dreading to leave an illiterate ministry to the Churches.” The academic color for theology is crimson, for the blood of Christ. an historic color long associated with Harvard. However this university has never been formally associated with a specific religious denomination.

The prevailing Calvinist theology emphasized salvation for a small group of believers—the “elect.” In contrast, Charles Wesley preached of a loving God, who laid aside aspects of divinity to take on human form. The birth of the Christ child was for the ultimate salvation and benefit of all who would believe. He poetically describes this theology in the following verses.

“Thou can not mock the sons of men,
Invite us to draw nigh,
Offer thy grace to all, and then
Thy grace to most deny!

Lord, if indeed, without a bound,
Infinite love Thou art,
The horrible decree confound,
Enlarge thy people’s heart!”

His preaching was infused with utmost energy, enthusiasm and passion. He once became so agitated in preaching on Psalm 23, that he suffered a prolonged nosebleed. This continued for some time after he had finished his sermon.

Unlike his brother, whom he dissuaded from marrying, Charles Wesley had a happy marriage. He had two sons and a daughter. One of his grandsons, Samuel Sebastian Wesley, became a leading English composer and church musician of the 19th century.

Wesley wrote over 6500 hymns, many of which are still popular today. He expresses a wide range of Christian experience in subjective poetic language with a decidedly evangelical emphasis. In addition to Come Thou Long-expected Jesus are the following favorites:

A Charge to Keep I Have;
Christ the Lord is Risen Today;
Love Divine, All Loves Excelling;
Ye Servants of God, Your Master Proclaim;
Jesus, Lover of my Soul; and
Hark the Herald Angels Sing.

Charles Wesley, though perhaps better gifted, has historically remained in his brother John’s shadow. For 50 years he tirelessly preached and wrote hymns with astounding facility in advancing the movement for “the people known as Methodists.” He maintained his ordination vows in the Church of England and strongly opposed the establishment of a separate Methodist denomination. He died in 1788.

As is often the case with hymns, Charles Wesley first published, Come Thou Long-expected Jesus without any music. Therefore, it could be sung with any tune in compatible meter for syllables arranged in the following pattern: 8.7.8.7.

Three tunes are now commonly paired with our hymn. However, Stuttgart is the only one that could have been sung during Wesley’s lifetime. Christian Friedrich Witt included Stuttgart in his 1715 collection, Salmodia Sacra (Sacred Psalms). It is interesting to consider that Wesley could have heard this tune played by Moravians on his voyage to Georgia. However, there is no documentation of this happening.

Cross of Jesus and Hyfrydol

And now, let us hear our hymn, with stanzas set to three different tunes—Cross of Jesus, Hyfrydol and Stuttgart—sung by your narrator and host, Dr. Larry Frazier, bass, accompanied by pianist Terry Lowry.

In Come Thou Long-expected Jesus, Charles Wesley refers to both the incarnation and to the second coming of Jesus. Scripture declares that Jesus will then rule eternally as a king over a new heaven and earth.

And, from Hebrews 12:25-26: “See that you do not refuse the one who is speaking. For if they did not escape when they refused the one who warned them on earth, how much less will we escape if we reject the one who warns from heaven! At that time his voice shook the earth, but now he has promised, ‘Yet once more I will shake not only the earth but also heaven.’”

During the season of Advent, may we pursue peace with everyone. May we also pursue the holiness that can allow the “long-expected Jesus, born a child and yet a king, to reign in us forever.” And “by thine own eternal spirit” and "all-sufficient merit, rule in our hearts alone and raise us to thy glorious throne.”

And now, let us hear our hymn, sung to the tune Cross of Jesus, by the St. Michael’s Singers

Thank you for joining me for this episode of The Hymn of the Week. Join us again, next week, when we will consider another great hymn.