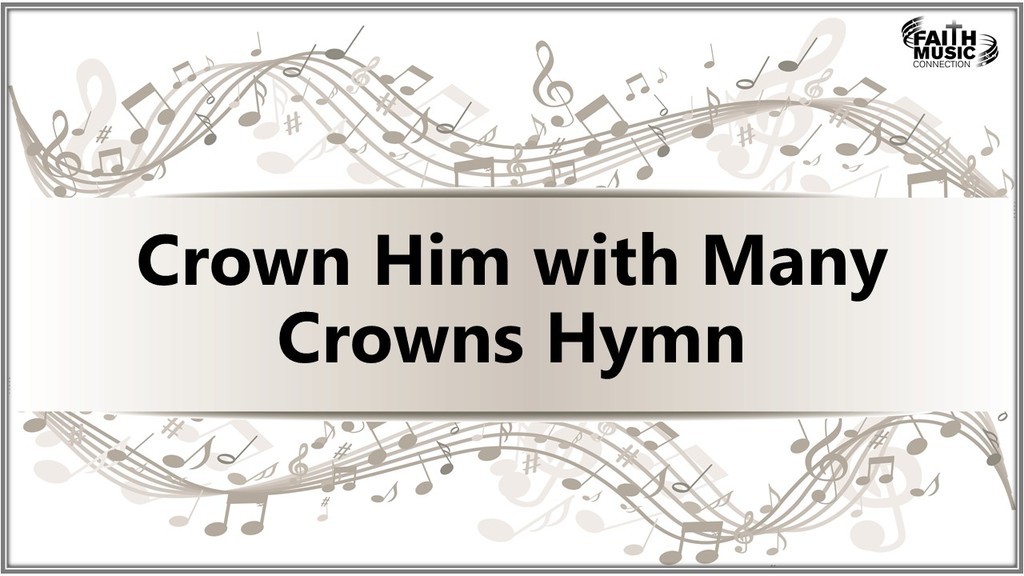 Crown Him with Many Crowns – Introduction of the Hymn

Welcome to The Hymn of the Week. Music and poetry of the romantic style period of the last half of the 19th century feature great contrasts of expression. The desire to explore and expand the limits of artistic expression produced works reflecting a wide variety of experience. Consequently, “romantic” music includes individual subjects of greatest intimacy as well as works of immense scale.

Such times invariably produce conflict, which is sometimes resolved with unexpected and positive result. That is certainly the case with this week’s hymn written by two different authors. “Crown Him with Many Crowns is”—"The Hymn of the Week!”

Click Below for Crown Him with Many Crowns Lyrics 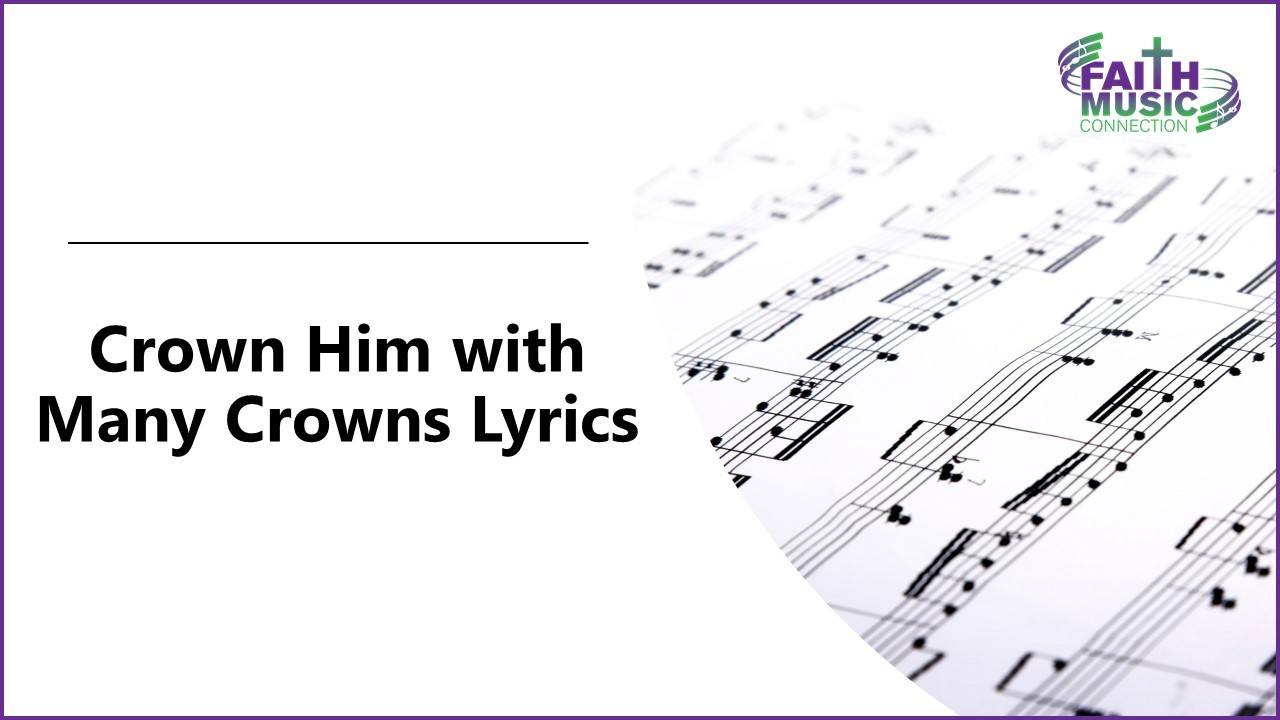 Crown Him with Many Crowns: Hymn of the Week Radio Show Episode

Reading of Crown Him with Many Crowns Lyrics

Crown Him with many crowns,
The Lamb upon His throne.
Hark! How the heav’nly anthem drowns
All music but its own.
Awake, my soul, and sing
Of Him who died for thee,
And hail Him as thy matchless king
Through all eternity.

Crown Him the virgin’s son,
The God incarnate born,
Whose arm those crimson trophies won
Which now His brow adorn;
Fruit of the mystic rose,
As of that rose the stem;
The root whence mercy ever flows,
The Babe of Bethlehem.

Crown Him the Lord of life,
Who triumphed o’er the grave,
And rose victorious in the strife
For those He came to save.
His glories now we sing,
Who died, and rose on high,
Who died eternal life to bring,
And lives that death may die.

Crown Him the Lord of peace,
Whose power a scepter sways
From pole to pole, that wars may cease,
And all be prayer and praise.
His reign shall know no end,
And round His piercèd feet
Fair flowers of paradise extend
Their fragrance ever sweet.

Crown Him the Lord of love,
Behold His hands and side,
Those wounds, yet visible above,
In beauty glorified.
No angel in the sky
Can fully bear that sight,
But downward bends his burning eye
At mysteries so bright.

Crown Him the Lord of lords,
Who over all doth reign,
Who once on earth, the incarnate Word,
For ransomed sinners slain,
Now lives in realms of light,
Where saints with angels sing
Their songs before Him day and night,
Their God, Redeemer, king.

Crown Him the Lord of years,
The Potentate of time,
Creator of the rolling spheres,
Ineffably sublime.
All hail, Redeemer, hail!
For Thou has died for me;
Thy praise and glory shall not fail
Throughout eternity.

Background of Crown Him with Many Crowns

The evangelical revival of the 18th century brought about unprecedented changes in the staid Church of England. The influence of John and Charles Wesley led to a rise in congregational singing. They emphasized hymns stressing subjective experience and personal devotion. Though hymn singing flourished, musical and liturgical standards varied greatly. In contrast, a group of reformers known as the Tractarians urged a return to more formal, liturgical worship.

During the 1830s, Tractarian reformers published a series of pamphlets on the subjects of church history and doctrine. These publications had a powerful impact. One, was a renewed interest in the ideals of the Catholic Church before the Reformation. Two, was a new emphasis on the liturgical hymn, closely related to the liturgical season and context.

Godfrey Thring (1823-1903), Anglican priest, wrote a hymn on the same text in 1874, upon request of Anglican clergy who opposed the Tractarians. Thring describes the crowns as follows: “gold,” “Son of life,” “Lord of light,” “Lord of life,” “Lord of lords” and “heaven.” Thring’s supporters intended to replace Bridges’ hymn with the one written by Thring.

Both Bridges’ and Thring’s hymns beautifully reflect the Revelation text. Bridges’ hymn as included in 1868, in “Hymns Ancient and Modern,” paired with the tune “Diademata,” by George J Elvey, proved too popular to replace. Hymn editors generally use Bridges’ stanzas, beginning with “Crown Him with Many Crowns,” sometimes in combination with a few by Thring. Ironically, the hymn was widely popular among both evangelicals and Tractarians. And it remains a favorite today.

And now, let us hear George J. Elvey’s, “Diademata,” the tune most associated with “Crown Him with Many Crowns, performed by The King’s Brass, with organist Tim Zimmerman.

George J. Elvey’s musical family, of Canterbury, England, encourage him to sing at a very early age. Born in 1816, he trained as a boy chorister at Canterbury Cathedral. Later, he studied at the Royal Academy of Music. In 1835, he served the English Royal family as organist and “Master of the Boys” at St. George’s Chapel, Windsor. Queen Victoria knighted him in 1871 for music he composed for the wedding of a royal princess. He continued at St. George’s for almost fifty years, until 1884.

Elvey’s finest hymn tune is “Diademata,” named after the Greek word for crowns. He composed this tune specifically for Matthew Bridges’ “Crown Him with Many Crowns.” Perhaps Elvey drew on his boyhood memories of Canterbury Cathedral to evoke the sense of majesty present in “Diademata.”

The melody begins with a long-short-short rhythmic pattern. Repeating the tonic note (do), it rather quickly rises a full octave by the end of the second line. The third line begins on the fifth note of the scale (sol). Next, the melody flows upward to pause on the 6th (la) before continuing upward to the 7th (ti) at the end of the line. This creates an exciting tension that climactically resolves upward to the octave (do) on the second note of the last line. Finally, the melody flows downward a full octave to complete resolution on the home note (do).

“Diademata” is in short meter doubled (6.6.8.6; 6.6.8.6). Of the 53 melody notes in each stanza, 44 are quarter notes of one beat each. This rhythmic structure strongly emphasizes the solid, stately procession of a majestic ecclesiastical march.

And now, we hear “Diademata,” performed by Frederick Swann on the organ of the Crystal Cathedral.

Our hymn is a beautiful meditation on the nature of our resurrected lord.

“Crown Him the Lord of love, behold his hands and side,
Rich wounds, yet visible above, in beauty glorified.
No Angel in the sky can fully bear that signt,
But downward bends his burning eye at mysteries so bright.

Crown Him the Lord of peace, whose power a scepter sways
From pole to pole, that wars may cease, and all be prayer and praise.
His reign shall know no end, and round His pierced feet
Fair flowers of paradise extend their fragrance ever sweet.

Crown Him the Lord of years, the Potentate of time,’
Creator of the rolling spheres, ineffably sublime.
All hair, Redeemer, hail! For Thou has died for me;
Thy praise and glory shall not fail throughout eternity.”

Now, let us hear our hymn beautifully performed by the Huddersfield Choral Society.