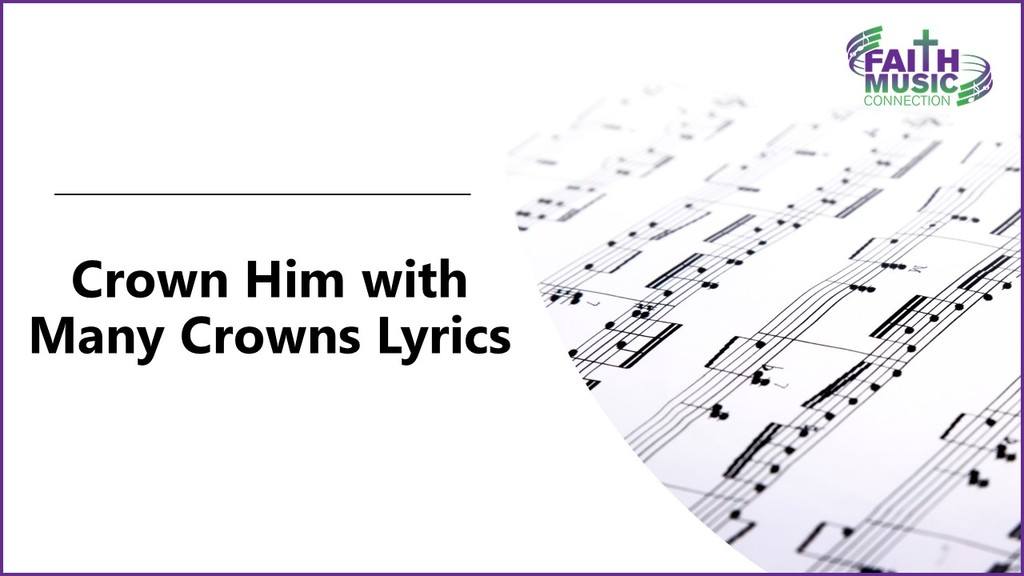 Crown Him with Many Crowns

Crown Him with many crowns,
The Lamb upon His throne.
Hark! How the heav’nly anthem drowns
All music but its own.
Awake, my soul, and sing
Of Him who died for thee,
And hail Him as thy matchless king
Through all eternity.

Crown Him the virgin’s son,
The God incarnate born,
Whose arm those crimson trophies won
Which now His brow adorn;
Fruit of the mystic rose,
As of that rose the stem;
The root whence mercy ever flows,
The Babe of Bethlehem.

Crown Him the Lord of life,
Who triumphed o’er the grave,
And rose victorious in the strife
For those He came to save.
His glories now we sing,
Who died, and rose on high,
Who died eternal life to bring,
And lives that death may die.

Crown Him the Lord of peace,
Whose power a scepter sways
From pole to pole, that wars may cease,
And all be prayer and praise.
His reign shall know no end,
And round His piercèd feet
Fair flowers of paradise extend
Their fragrance ever sweet.

Crown Him the Lord of love,
Behold His hands and side,
Those wounds, yet visible above,
In beauty glorified.
No angel in the sky
Can fully bear that sight,
But downward bends his burning eye
At mysteries so bright.

Crown Him the Lord of lords,
Who over all doth reign,
Who once on earth, the incarnate Word,
For ransomed sinners slain,
Now lives in realms of light,
Where saints with angels sing
Their songs before Him day and night,
Their God, Redeemer, king.

Crown Him the Lord of years,
The Potentate of time,
Creator of the rolling spheres,
Ineffably sublime.
All hail, Redeemer, hail!
For Thou has died for me;
Thy praise and glory shall not fail
Throughout eternity.

The evangelical revival of the 18th century brought about unprecedented changes in the staid Church of England. The influence of John and Charles Wesley led to a rise in congregational singing. Though hymn singing flourished, musical and liturgical standards varied greatly. In contrast, a group of reformers known as the Tractarians urged a return to more formal, liturgical worship.

Poet and scholar Matthew Bridges converted to Catholicism in response to these ideals. In 1851, he wrote "Crown Him with Many Crowns" based on Revelation 19:12--"On his head were many crowns."

Godfrey Thring, Anglican priest, wrote a hymn on the same text in 1874, upon request of Anglican clergy who opposed the Tractarians. Both hymns beautifully reflect the Revelation text. Hymn editors generally use a combination of stanzas from both authors. Ironically, the hymn was widely popular among both evangelicals and Tratarians. And it remains a favorite today.