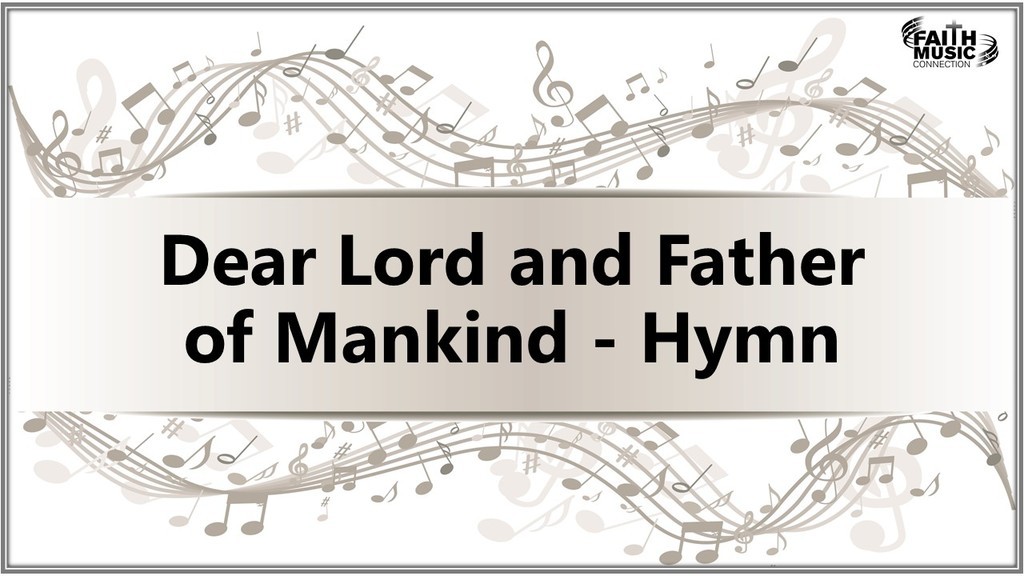 Dear Lord and Father of
Mankind - Introduction of the Hymn

Welcome to The Hymn of the Week. Of the thousands of hymns written throughout the ages are many by distinguished writers of poetry or prose. This week’s hymn is by a well-loved, 19th-century American writer and editor from New England, John Greenleaf Whittier. Though respected and admired for his poetic gifts, he was also an influential political activist. He was fervently involved in the anti-slavery movement and one of the founders of the Republican Party. Whittier wrote almost 100 hymns reflecting his Quaker, Christian perspective. Perhaps his most popular is Dear Lord and Father of Mankind – The Hymn of the Week!

Click Below for Dear Lord
and Father of Mankind Lyrics

Dear Lord and Father of Mankind: Hymn of the Week Radio Show Episode

Reading of Dear Lord and
Father of Mankind Lyrics

Dear Lord and Father of mankind,
Forgive our foolish ways;
Reclothe us in our rightful mind,
In purer lives Thy service find, In
deeper reverence, praise.

In simple trust like theirs who heard,
Beside the Syrian sea.
The gracious calling of the Lord,
Let us, like them, without a word,
Rise up and follow Thee.

O Sabbath rest by Galilee,
O calm of hills above,
Where Jesus knelt to share with Thee
The silence of eternity,
Interpreted by love!

With that deep hush subduing all
Our words and works that drown
The tender whisper of Thy call,
As noiseless let Thy blessing fall
As fell Thy manna down.

Drop Thy still dews of quietness,
Till all our strivings cease;
Take from our souls the strain and stress,
And let our ordered lives confess
The beauty of Thy peace.

Breathe through the heats of our desire
Thy coolness and Thy balm;
Let sense be dumb, let flesh retire;
Speak through the earthquake, wind, and fire,
O still, small voice of calm!

And now, let us hear our hymn, paired with the tune, Rest, performed by the Dallas Christian Concert Choir.

Background of Dear Lord
and Father of Mankind

John Greenleaf Whittier was born in 1807 on a farm near Hemphill, Massachusetts. His Quaker parents placed a high value on education, but maintaining the family farm was of prime importance. His formal education consisted of two years of study at the nearby Hemphill School, where a teacher introduced him to the works of Robert Burns. This fueled Whittier’s life-long interest in poetry and provided a foundation for his development as a writer and poet.

Whittier’s sister secretly took some of his poems to William Lloyd Garrison, editor of the nearby "Newburyport Free Press". Garrison, a prominent leader in the anti-slavery movement, encouraged the young writer. Accordingly, he assisted him in becoming editor of prominent periodicals in Hartford and Boston. Whittier also became a political activist, writing numerous anti-slavery articles.

In 1835, he was elected to a single term as a representative in the Massachusetts Legislature. Shortly thereafter, he ran an unsuccessful campaign as a candidate for the United States Congress. His outspoken activities and his many fervent articles in poetry and prose urging the abolition of slavery gave him considerable political influence. After the collapse of the Whig Party, he became one of the founders of the Republican Party.

Refocus toward Writing and Editing

Whittier abhorred slavery, and his deeply held Quaker principles led him to oppose war. But, ultimately, he decided to refocus his work away from politics and toward writing and editing. In 1857, he began an affiliation with the periodical, "The Atlantic Monthly," which lasted for the rest of his life.

Throughout his life, Whittier remained in touch with his rural roots, maintaining an empathy with the common man. His poetry enjoyed great popularity both in the United States and in Great Britain. Perhaps his most popular poem is Snowbound, published in 1866, detailing winter life and landscape near his New England home.

Popularity of Dear Lord and Father of Mankind

Dear Lord and Father of Mankind first appeared in “The Atlantic Monthly,” in 1872. It was part of an extended narrative poem entitled, The Brewing of Soma. The subject was futile attempts of an order of pagan priests to achieve a religious experience through drinking an intoxicating brew. W. Garrett Horder adapted the hymn for congregational singing, including it in a collection entitled, “Worship Song,” published in London, in 1884. Whittier died in 1892. Within twenty years, Dear Lord and Father of  Mankind appeared in many hymnals in both Great Britain and the United States.

Additional popular hymns by John Greenleaf Whittier include Immortal Love, Forever Full and We May Not Climb the Heavenly Steeps. Others include O Brother Man, (first published as an anti-slavery hymn) I Bow my Forehead to the Dust and O Master of us All.

And now, hear Rest, a tune originally composed for Dear Lord and Father of Mankind, arranged and performed by organist, Frederick Swan.

Ironically, the two tunes most often paired with Dear Lord and Father of Mankind are by English, not American musicians. Rest, by Frederick Charles Maker, is the tune most commonly paired with our hymn. Born in 1844, in Bristol, England, Maker spent his entire career in his hometown. For twenty years, he was a visiting professor at Clifton College and also organists for several churches. He wrote a number of anthems and an oratorio—“Moses in the Bullrushes." He is most remembered for his tunes Rest and St. Christopher, composed for the hymn Beneath the Cross of Jesus. Maker died in 1927.

In his tune, Rest, Maker sets the first two lines of verse in a relatively low range. The melody consists of small intervals marked by a series of five consecutive half-steps on the words, “of mankind, forgive…” The third phrase rises abruptly to the highest pitches of the tune on the words, “our rightful mind.” Then, the melody descends quietly to the final phrase. This is symbolic of the peace, calm and silence so highly valued in Quaker religious philosophy.

Repton, by English composer, teacher and scholar Charles Hubert Hastings Parry (1848-1919) is the other tune effectively paired with our hymn. George Grove, director of The Royal College of Music appointed Parry to the faculty in 1883. (Grove is well-known to musicians today for his “Dictionary of Music and Musicians.”) Parry contributed several scholarly articles for this publication. In 1894, he succeeded his mentor as director of The Royal College of Music. He was knighted for his achievements in 1898.

Parry composed Repton for use in his oratorio, “Judith,” published in 1888. Unlike Maker’s tune, Rest, Repton has a more sweeping melody. It also has a wider range and is marked by interval leaps of fourths and fifths. The musical climax and highest pitch occur in the final line on the word, “deeper.” There is a calm return to the tonic on the words, “reverence, praise.”

The meter of our hymn is 8.6.8.8.6, a most unusual one. A more common meter for hymns is 8.6.8.6. This is the meter of Amazing Grace, Joy to the World and All Hail the Power of Jesus’ Name. Indeed it is used so often as to be given the name, “common meter.”

Poetically and musically, the addition of another line of eight pulses allows for the amplification of the third line of verse. Had our hymn been written in common meter, the first stanza might have ended with the following words and music. “Reclothe us in our rightful mind…In deeper reverence, praise.” Instead, with 8.6.8.8.6, the first stanza closes beautifully as we are accustomed. “Reclothe us in our rightful mind” with the added, “In purer lives Thy service find,” before “In deeper reverence, praise.”

Both tunes are effective with “Dear Lord and Father of Mankind.” They demonstrate the power of music to convey additional expression and meaning to a well-written hymn. A good hymn can certainly stand alone. When sung, as intended, with effective music, it can resonate in the heart of the believer.

And now, let us hear our hymn, beautifully sung with the tune, “Repton,” by the choir of King’s College, Cambridge, Stephen Cleobury, conductor.

Though written over 135 years ago, John Greenleaf Whittier’s hymn, “Dear Lord and Father of Mankind,” seems particularly relevant today. Ours is a frantic, fast-paced world of instant news, communication and entertainment interrupted by violence famine and natural disasters. Fires, floods, earthquakes, volcanoes, hurricanes, tornadoes and tsunamis claim many lives. Many are brought down by alcohol and drug abuse. Perhaps, we are not unconnected with the pagan subjects of the poem of which our hymn is a part.

Whittier invites us to pray with him. “Dear Lord and Father forgive our foolish ways. Take from our souls the strain and stress, and reclothe us in our rightful mind. Speak through the earthquake, wind and fire. Breathe through the heats of our desire, thy coolness and thy balm. Drop thy still dews of quietness till all our strivings cease. Let us hear the gracious calling of the Lord and rise up and follow thee.

And now, let us hear our hymn, sung with the tune “Repton,” by the Halifax Choral Society, conducted by John Pryce Jones.