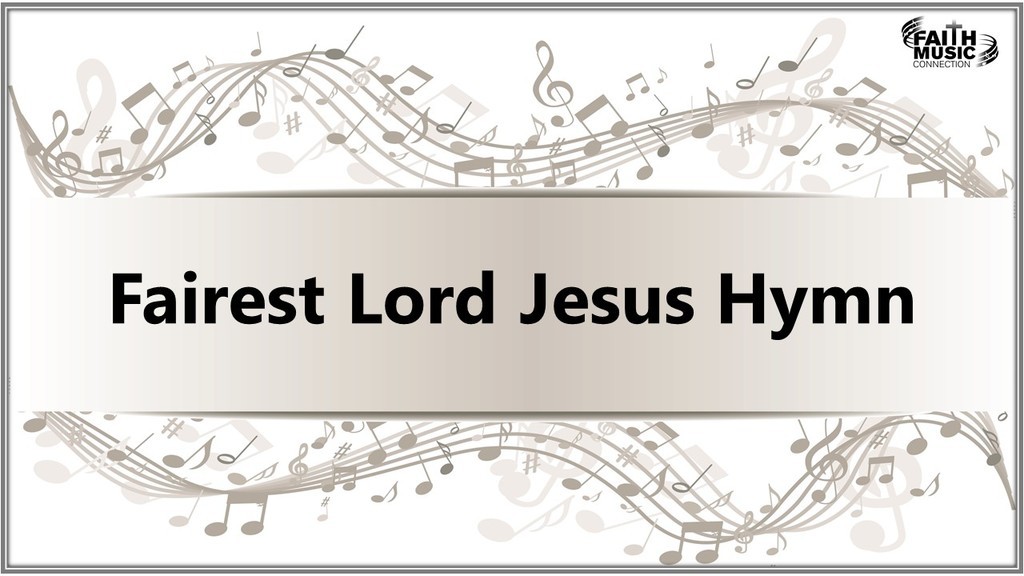 Welcome to The Hymn of the Week. This week, we will consider a hymn that has many unusual associations. First, the Crusades. Second, the Eastern European province of Silesia. Third, a 19th-century American music critic and church musician who wrote the music to the popular Christmas carol, “It Came upon the Midnight Clear. And fourth, a Maryland Lutheran minister of Moravian heritage. Today, the hymn is sung in two translations of the original German text. One is popular among Lutherans. The other most often appears in other Christian hymnals. As you may have already guessed, “Fairest Lord Jesus” is— “The Hymn of the Week!” 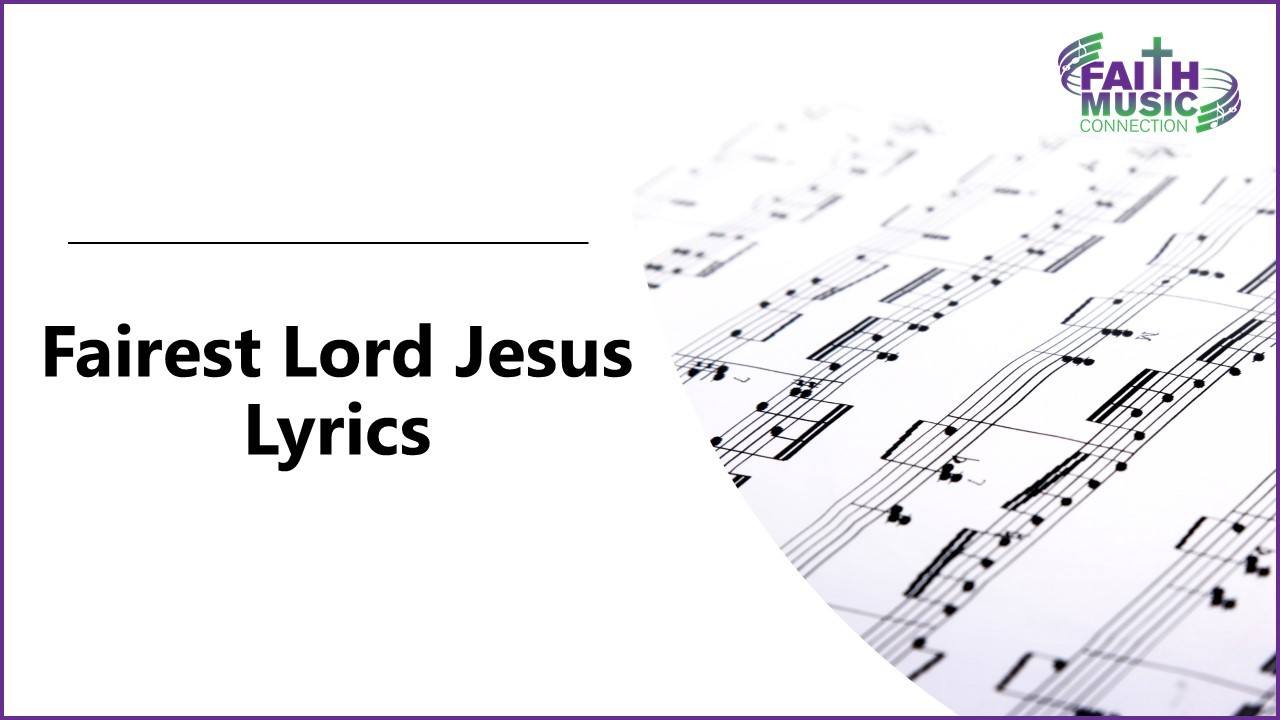 Fairest Lord Jesus, ruler of all nature,
O Thou of God and man the Son,
Thee will I cherish, Thee will I honor,
Thou, my soul’s glory, joy and crown.

Fair are the meadows, fairer still the woodlands,
Robed in the blooming garb of spring;
Jesus is fairer, Jesus is purer,
Who makes the woeful heart to sing.

Fair is the sunshine,
Fairer still the moonlight,
And all the twinkling starry host;
Jesus shines brighter, Jesus shines purer
Than all the angels Heav’n can boast.

All fairest beauty, heavenly and earthly,
Wondrously, Jesus, is found in Thee;
None can be nearer, fairer or dearer,
Than Thou, my Savior, art to me.

Beautiful Savior! Lord of all the nations!
Son of God and Son of Man!
Glory and honor, praise, adoration,
Now and forever more be Thine.

The original German text appears in Lutheran hymnals in the following translation.

Fair are the meadows, fair are the woodlands,
Robed in the flowers of blooming spring;
Jesus is fairer, Jesus is purer,
He makes our sorrowing spirit sing.

Fair is the sunshine, fair is the moonlight,
Bright the sparkling stars on high;
Jesus shines brighter, Jesus shines purer
Than all the angels in the sky.

Beautiful Savior, Lord of the nations,
Son of God and Son of Man!
Glory and honor, praise, adoration
Now and forevermore be Thine!

And now, let us hear our hymn paired with the tune, “Crusaders’ Hymn,” performed by the Londonderry Choir

According to legend, 12-century German crusaders sang “Schoenster Herr Jesu” (“Fairest Lord Jesus”) as they marched to fight Moslems in Palestine. Whether true or not, the actual author of the hymn is unknown. It first appeared in “Muensterisch Gesangbuch” (“Muenster Songbook”), a Catholic hymnal published in 1677, in Muenster, Westphalia, Germany. German Jesuits in Muenster trace a handwritten manuscript of the Hymn to 1662. The Jesuits (or Society of Jesus) is a Catholic order whose members dedicate themselves to scholarship and devotion to Jesus.

Later, “Fairest Lord Jesus” appeared in an 1842 collection, “Schlesiger Volkslieder (Silesian Folksongs). Heinrich August Hoffman von Fallerslebein (1789-1874) published this collection in Leipzig, Germany, in 1842. He stated he had notated both words and music after hearing them sung by devout Protestant Silesian peasants in Glaz.

Seiss was born in 1823, in Graceham, Maryland, to parents of Moravian heritage. He entered the Lutheran clergy after graduation in 1848 from Gettysburg College and Seminary of Pennsylvania. A prolific author, he wrote on religious topics, books of the Bible and the assassination of President Abraham Lincoln. He served in several prominent positions in the Lutheran Church in Pennsylvania until his death is 1904.

And now, we hear “Fairest Lord Jesus” performed by soprano Leontyne Price and the Choir of Men and Boys of St. Thomas Episcopal Church, New York.

In addition to his considerable skills as a writer, Richard Storrs Willis was also a musician of note. During the time of his graduate studies, he met and developed a close friendship with famed composer Felix Mendelssohn. Mendelssohn’s Romantic masterworks include the oratorio, “Elijah” and the “Reformation” Symphony. This symphony featured prominent use of Martin Luther’s chorale, “A Mighty Fortress” and the stately, Dresden “Amen.” Mendelssohn also championed the works of J. S. Bach (1685-1750), who produced sacred music masterworks at St. Thomas Church, Leipzig.

Such associations and experiences heightened Willis’ interest in German church music. He was struck by the beauty of “Schoenster Herr Jesu” coupled with “Crusaders’ Hymn.” When he published this hymn in “Church Chorals and Choir Studies,” he did not credit a translator. Thus, it is quite possible Willis translated the hymn, himself. And, he retained the beautiful tune, “Crusaders’ Hymn,” just as he had first heard it in Germany. Willis’ introduction of our hymn to Americans parallels Mendelssohn’s re-introduction of J. S. Bach’s music to 19th-century Europeans. Notably, Willis also composed the tune “Carol,” now permanently linked to the popular Christmas carol, “It Came upon the Midnight Clear.”

“Crusaders’ Hymn,” also known as “Schoenster Herr Jesus,” is popular in England under the name, “St. Elizabeth.” It first appeared in Henry Allon and Henry John Gauntlett’s, “Congregational Psalmist,” published in London, in 1861. In this collection of Psalm arrangements, it was not paired with “Fairest Lord Jesus.” Instead, it was paired with Isaac Watts’ metrical setting of Psalm 122, “How Pleased and Blest Was I.” One year later, Franz Liszt used the tune, “St. Elizabeth,” as the basis for the “Crusaders’ March” in his oratorio, “The Legend of Saint Elizabeth.” It was not until 1916 that “Fairest Lord Jesus” was paired with “St. Elizabeth” in an English hymnal.

And now, let us hear our tune, beautifully performed on the guitar by Christopher Parkening.

“Fairest Lord Jesus” is a beautiful poetic meditation on the nature of Jesus Christ. Consider Philippians 2:5-11. “Christ Jesus, who though he was in the form of God, did not regard equality with God as something to be exploited. But he emptied himself, taking the form of a slave, being born in human likeness. And being found in human form, he humbled himself and became obedient to the point of death—even death on a cross. Therefore, God also highly exalted him and gave him the name that is above every name. So that at the name of Jesus, every knee should bend in heaven and on earth and under the earth. And every tongue should confess that Jesus Christ is Lord, to the glory of God the Father.”

This is the word of the Lord; thanks be to God!

And now, let us hear the translation of our German hymn by Lutheran minister Joseph Augustus Seiss, beautifully performed by the Metropolitan Boys Choir, followed by the Eden Symphony Orchestra.