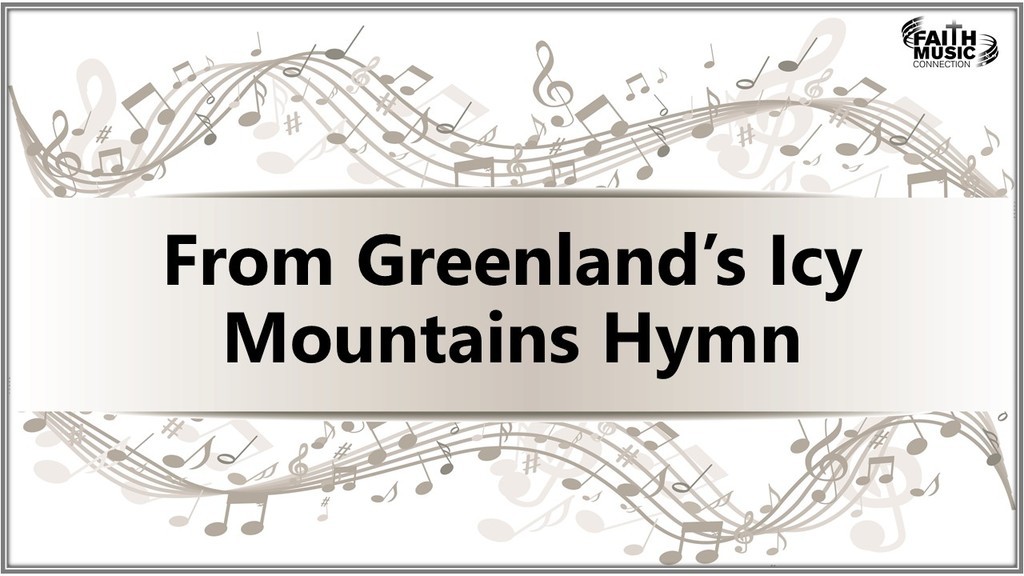 Welcome to The Hymn of the Week where today, we are featuring From Greenland’s Icy Mountains.

A dictionary definition of the word “deadline” is as follows: “a date or time before which something must be done.” Students, journalists, painters, performing artists and preachers complete assignments and sermons under the almost constant pressure of a deadline. Often, a deadline serves as a powerful motivator forcing decision, synthesis and closure.

Hymn writers are not always under this type of pressure. But 18th and 19th-century Anglican clergy were expected to write a poem or hymn to accompany their weekly sermons. Consequently, authors sometimes wrote complete hymns in an amazingly short time. Such is the case with the author and the composer of one of the greatest missionary hymns. 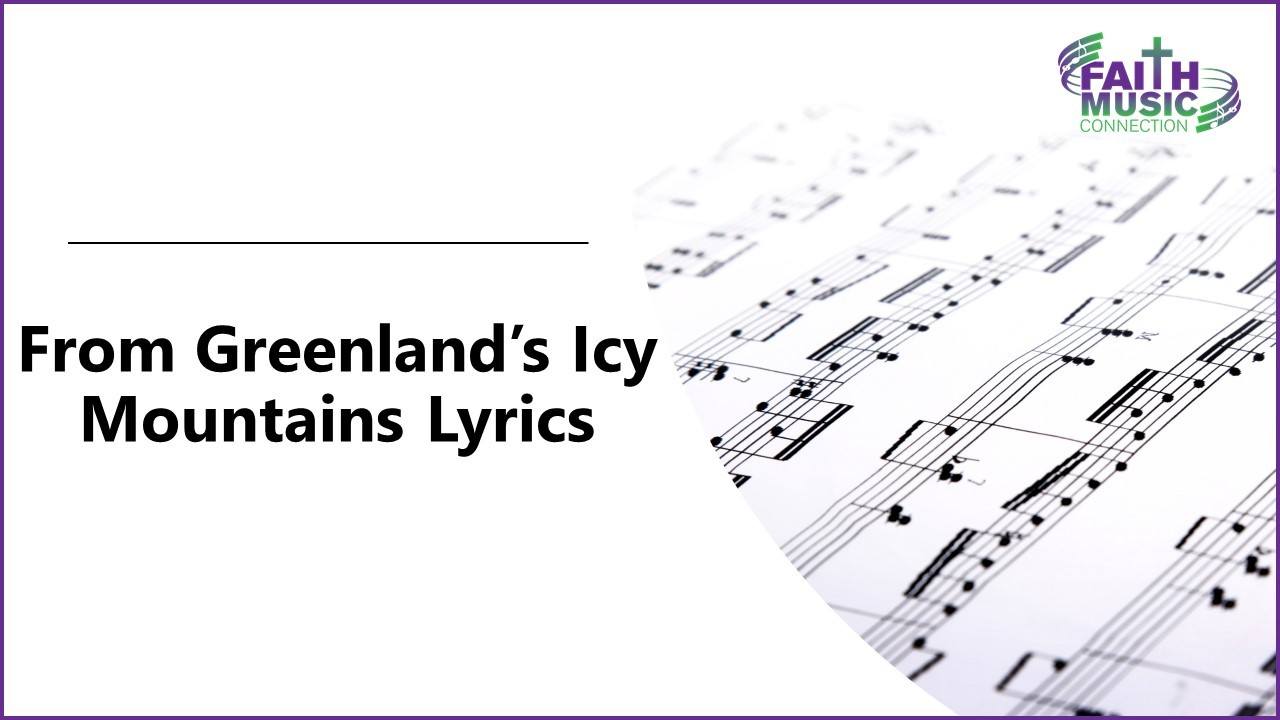 Reading of the Text

From Greenland’s icy mountains, from India’s coral strand;
Where Afric’s sunny fountains roll down their golden sand:
From many an ancient river, from many a palmy plain,
They call us to deliver their land from error’s chain!

What though the spicy breezes blow soft o’er Java’s isle;
Though every prospect pleases, and only man is vile:
In vain with lavish kindness the gifts of God are strown;
The heathen, in his blindness, bows down to wood and stone!

Can we, whose souls are lighted with wisdom from on high,
Can we to men benighted the lamp of life deny?
Salvation! O salvation! The joyful sound proclaim,
Till earth’s remotest nation has learned Messiah’s name!

Waft, waft, ye winds, His story, and you, ye waters, roll
Till, like a sea of glory, it spreads from pole to pole;
Till o’er our ransomed nature the Lamb for sinners slain,
Redeemer, king, creator, in bliss returns to reign!

And now, let us hear our hymn paired with the tune, “Missionary Hymn,” performed by your host, Larry Frazier, bass, accompanied by Terry Lowry.

Background of From Greenland's Icy Mountains

Reginald Heber was born in 1783, in Cheshire, England, to a wealthy and influential family. He was a precocious reader from an early age. He graduated with academic honors from his studies in Latin and English literature at Brasenose College, Oxford. Upon graduation, the Church of England ordained him to the clergy. Later, Oxford University awarded him an honorary doctorate. He wrote most of his nearly 60 hymns while serving as vicar at Hodnet in Shropshire.

After 16 years in this post, he accepted an appointment as Bishop of Calcutta, in 1823. In this new position he fulfilled responsibilities for preaching the Gospel, baptizing new converts and establishing churches throughout the entire Indian sub-continent. This missionary work took a toll on his health, and he died of a stroke in 1826. 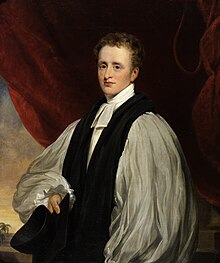 Heber displayed a keen interest in missionary work even before his Calcutta appointment. In 1819, he penned his great missionary hymn, “From Greenland’s Icy Mountains.” “From Greenland’s icy mountains to India’s coral strand…the heathen in his blindness bows down to wood and stone…Salvation! O Salvation! The joyful sound proclaim till earth’s remotest nation has learned Messiah’s name.” Amazingly, Heber completed all four stanzas in about a half-hour.

“Bread of the World in Mercy Broken,” “Brightest and Best of the Sons of the Morning,” “God that Madest Earth and Heaven,” and “The Son of God Goes Forth to War” are among the more familiar hymns of Heber. Alfred Lord Tennyson is said to have considered Heber’s “Holy, Holy, Holy,” one of the finest hymns ever written. He also composed the melody of a single hymn tune— "Calcutta.”

And now, let us hear an improvisation on “Missionary Hymn,” the tune most commonly paired with our hymn, performed by pianist Terry Lowry.

“Missionary Hymn” was composed in Savannah, Georgia, in 1823. Mary Howard, a member of the Independent Presbyterian Church, there, is said to have come across the beautiful lyrics of our hymn. During this time, publishers often published hymns without music. Howard took the verses to her church’s music director, Lowell Mason, whose then principal work was as a bank clerk. Mason reportedly completed the music—his first published hymn tune—in about thirty minutes. Ironically, this was about the amount of time Heber took, four years earlier, to write “From Greenland’s Icy Mountains.”

Born in Medfield, Massachusetts, in 1792, the son of a mechanic of limited financial resources, Lowell Mason had from his earliest years a great passion for music. He learned to play many instruments, but he excelled as a singer. By the age of 16 he was teaching classes on singing.

Mason left Massachusetts at the age of 20 and moved to Savannah, Georgia, to make his mark as a banker. In Savannah, he continued his music studies with the German teacher, Frederick Abel. Soon, he became director of music, organist and choirmaster at the Independent Presbyterian Church. There, he established music classes in the Sunday school, where he taught the children rudimentary music skills using hymns and other church music.

He also began to compose music, arranging several Psalm tunes and music by Haydn, Mozart and Beethoven, together with his own original compositions. The Handel and Haydn Society, a prestigious organization devoted to the promotion and performance of classical music, liked Mason’s work. They published this first collection in Boston, in 1821, entitled, “The Boston Handel and Haydn Society’s Collection of Church Music.” Mason returned to Massachusetts in 1827 because of the great success of this publication.

Father of Music Education in the U.S.

Lowell Mason established the Boston Academy of Music in 1833. Subsequently, he was appointed Superintendent of Music for the Boston school system in 1838. Mason wrote over 1600 church music compositions, including the music for numerous familiar and popular hymns, including “When I Survey the Wondrous Cross.”

In 1851, Mason moved to New York City, to be closer to his sons, one of whom was a concert pianist. The other son was a principal in the Mason and Hamlin Company, the builder of fine pianos until late in the 20th century. After a trip to Germany, he championed the idea of congregational singing as the basis for music in worship.

Upon his return, he built a great program of congregational singing as Director of Music at the Fifth Avenue Presbyterian Church. He served there for seven years until retirement to his estate in Orange, New Jersey, in 1860, at the age of 68. He remained active in church music until his death in 1872.

“Go therefore and make disciples of all nations, baptizing them in the name of the Father and of the Son and of the Holy Spirit, teaching them to obey everything that I have commanded you. And remember, I am with you always, to the end of the age.” This great commission, the concluding verses of the gospel of St. Matthew, has inspired Christian missionaries throughout the age. Reginald Heber, like they, committed to share the good news of Jesus Christ to the far reaches of the world.

Perhaps, Heber’s hymn led to his missionary appointment as Bishop of Calcutta in 1823. Surprisingly, little in his previous pastoral and scholarly career suggests success in missionary work. His health was fragile, seemingly unsuited to the rigorous physical demands of serving in the harsh climate of southern Asia. . . except for his ardent devotion to and love for Jesus Christ. Christian missionaries continue to answer the great commission. Though modern idols are made of materials other than wood and stone, these poetic verses of Reginald Heber challenge and call Christians today.

“From Greenland’s icy mountains to India’s coral strand…the heathen in his blindness bows down to wood and stone…Salvation! O Salvation! The joyful sound proclaim till earth’s remotest nation has learned Messiah’s name.” Amen!

And now, let us hear the 3rd movement of “Symphony #4,” by American composer, Charles Ives. Ives uses “Missionary Hymn” as the subject of a fugue, which is repeated throughout. And, if you listen closely, you may also hear parts of another popular hymn tune, “Coronation.” This tune is often paired with the hymn, “All Hail the Power of Jesus’ Name.”