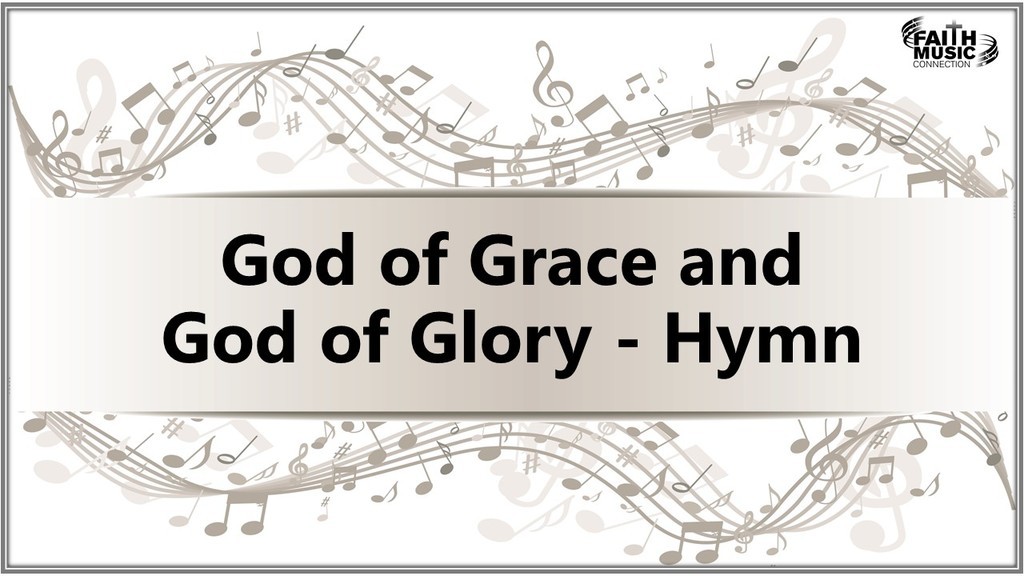 God of Grace and God of Glory– Introduction of the Hymn

Welcome to The Hymn of the Week. This week we will consider another twentieth-century hymn with a wide variety of associations. Some of these associations are perhaps, unique to hymnody. Both hymn and tune are by Baptists.

The author was an ordained minister with connections to Colgate University and Union Theological Seminary, New York. He served prominent Presbyterian and Baptist churches in Manhattan before pastoring the Riverside Church, built by John D. Rockefeller, Jr. The composer was a deacon and song leader who worked in the coal mines around Glamorganshire, Wales. Both wrote no other memorable hymns or tunes.

Our hymn reflects the ecumenical views of the author and has a direct connection to the title of his autobiography. The author held highly controversial views on the inspiration of scripture. Time Magazine once featured his picture on its cover.

The tune has been called the unofficial Welsh national anthem. It is lustily sung to decidedly non-religious lyrics by fans attending soccer and rugby matches in Wales. In worship throughout Great Britain it is usually paired with the eighteenth-century hymn, Guide Me, O Thou Great Jehovah. Although popular in the United States, its Welsh tune name is confusing to the relatively few Americans who know it.

These associations are the clues. Congratulations if you have guessed, God of Grace and God of Glory…The Hymn of the Week!

Click Below for God of Grace and God of Glory Lyrics

God of Grace and God of Glory: Hymn of the Week Radio Show Episode

Reading of God of Grace and God of Glory Lyrics

And now, let us hear our hymn, performed by the Abilene Christian University Alumni Chorus, directed by Dr. Jack Boyd.

Background of God of Grace and God of Glory

Harry Emerson Fosdick, author of God of Grace and God of Glory, was one of the most influential ministers of the twentieth century. He was born in Buffalo, New York, in 1878, the son of a high school teacher. After graduation from Colgate University, he earned a divinity degree from Union Theological Seminary in 1904.

Ordained a Baptist minister, Fosdick served as pastor of First Baptist Church, Montclair, New Jersey, from 1904 to 1915. During this period, he completed a masters degree from Columbia University in 1908. He also taught homiletics (preaching) at Union Seminary from 1908 to 1915. Then, he served as professor of homiletics and practical theology there from 1915 until retirement in 1946.

In 1919, Fosdick became associate pastor of Manhattan’s First Presbyterian Church. During this pastorate, he preached his famous sermon, “Shall the Fundamentalists Win?” In this homily, he stated his liberal views advocating the inclusion of modern Christians who doubted the literal interpretation of the Bible. Fosdick’s publicist sent copies to churches across the country. Not surprisingly, this stirred great controversy among Fundamentalists and traditionalists, including William Jennings Bryan. Ultimately, this led to his resignation from his Presbyterian pastorate in 1925.

The next year, Fosdick accepted an appointment as pastor of Park Avenue Baptist Church. Among its members was the powerful industrialist and philanthropist John D. Rockefeller, Jr. Rockefeller embraced Fosdick’s ideals of a ministry inclusive of all races and social classes. It was to this end that he built the interdenominational Riverside Church in the Morningside area of upper Manhattan. The site overlooked the Hudson River.

The Park Avenue congregation and Fosdick moved to this new location. He served as the church’s pastor from its dedication in 1931 until 1946. He wrote God of Grace and God of Glory for the dedication of the new church. It was published in 1932 in a collection entitled, Praise and Service, and it has enjoyed increasing popularity to the present. Fosdick remained active as a preacher, author and radio personality during retirement. Certainly, he was one of the twentieth century’s most imminent clergy at his death in 1969, age ninety-one.

And now, let us hear two musical selections utilizing the tune Cwm Rhondda. First, hear an arrangement for string quartet entitled God of Grace and God of Glory, by David Davidson. Then, hear the hymn, Guide Me, O Thou Great Jehovah, sung by the Dunvant Male Choir of Wales.

John Hughes (1873-1932) was born and lived most of his life in an area near Glamorganshire, Wales. He was a life-long member of Salem Baptist Chapel, and he succeeded his father as both a deacon and organist and music leader. He wrote the tune Cwm Rhondda, which in Welsh literally means, “the Rhondda Valley,” for a singing festival at the chapel. The precise date is unknown but was most likely between 1905 and 1907.

Cwm Rhondda was originally paired with the hymn, Angels from the Realms of Glory. Now, it is most commonly coupled with Guide Me, O Thou Great Jehovah in British hymnals. Interestingly, these hymns share the same meter—8.7.8.7.8.7. These numbers indicate the number of syllables in the six lines of verse in each stanza. The tune contains an extra melody line of seven pulses following the three pairs of “8.7.” This allows for the repetition of the final line of verse in each stanza of both hymns.

And now, let us hear Guide Me, O Thou Great Jehovah, paired with Cwm Rhondda, as performed by the Huddersfield Choral Society and Wyn Morris.

Some notable quotations of Harry Emerson Fosdick provide insight into his widespread influence as scholar, teacher and preacher. Consider a few of these for meditation.

“Hating people is like burning down your own house to get rid of a rat.”
“The tragedy of war is that it uses man’s best to do man’s worst.”
“Liberty is always dangerous, but it is the safest thing we have.”
“Bitterness imprisons life; love releases it.”

“It is by acts and not by ideas that people live.”
“Picture yourself vividly as winning, and that alone will contribute immeasurably to success.”
“The world is moving so fast these days that the one who says it can’t be done is generally interrupted by someone doing it.”
“God is not a cosmic bellboy for whom we can press a button to get things.”

“We cannot all be great, but we can always attach ourselves to something that is great.”
“Our power is not so much in us as through us.”
“To keep the golden rule, we must put ourselves in other people’s places, but to do that consists in and depends upon picturing ourselves in their places.”
“Whatever you laugh at in others, laughs at yourself.”

“Preaching is personal counseling on a group basis.”
“God has put within our lives meanings and possibilities that quite outrun the limits of mortality.”
“I would rather live in a world where my life is surrounded by mystery than live in a world so small that my mind could comprehend it.”
“The steady discipline of intimate friendship with Jesus results in men becoming like Him.”

And finally, “Religion is not a burden, not a weight; it is wings.” …Amen!

And now, let us hear a majestic and spirited performance of Guide Me, O Thou Great Jehovah paired with the tune, Cwm Rhondda, led and played by organist Dr. Kenneth M. Dean, Jr.

Thank you for joining me for this episode of The Hymn of the Week. Tune in again, next week, when we will consider another great hymn.