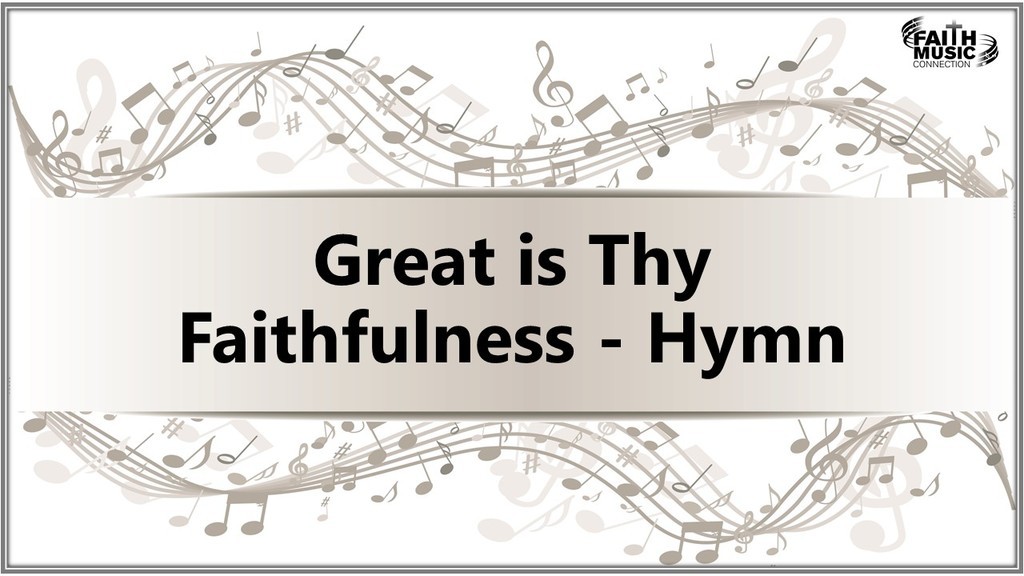 Great is Thy Faithfulness – Introduction of the Hymn

Welcome to The Hymn of the Week. The great body of Christian hymns spans over 1,000 years of poetic expression. Clergy, laity, highly educated or self-taught believers write hymns. Some write hundreds or thousands of hymns; others may write only one.

This week we will consider a widely popular 20th-century hymn. It is one of over 1,000 written by a devout and humble man of little formal education from rural Kentucky. No dramatic event inspired the author. Instead, he wrote the hymn out of his awareness and thankfulness for the faithfulness of God throughout his life. This hymn, Great is Thy Faithfulness is…The Hymn of the Week!

Great is Thy Faithfulness: Hymn
of the Week Radio Show Episode

Reading of Great is
Thy Faithfulness Lyrics

Great is Thy faithfulness, O God my Father,
There is no shadow of turning with Thee;
Thou changest not, Thy compassions, they fail not;
As Thou hast been, Thou forever will be.

Summer and winter and springtime and harvest,
Sun, moon and stars in their courses above
Join with all nature in manifold witness
To Thy great faithfulness, mercy and love.

Pardon for sin and a peace that endureth,
Thine own dear presence to cheer and to guide;
Strength for today and bright hope for tomorrow,
Blessings all mine, with ten thousand beside!

And now, let us hear our hymn, performed by the Harding University Concert Choir.

Background of Great
is Thy Faithfulness

Thomas Obadiah Chisholm is the author of our hymn. He was born in Simpson County, Kentucky, near the small town of Franklin, on July 20, 1866. This rural area borders Tennessee, about thirty-five miles North of Nashville.

The local school included only eight grades. Chisholm was a bright student. Without the benefit of a high-school education, he became the teacher of this one-room country school at age 16.

Chisholm also worked for the local weekly newspaper. By the age of 21, he had become associate editor.

In 1893, he had a conversion experience after attending a service in Franklin conducted by Dr. H. C. Morrison, prominent Methodist evangelist. Dr. Morrison was impressed with the young man. Later that year, he hired him as managing editor of his publication, “The Pentecostal Herald,” in Louisville, Kentucky.

Chisholm was successful in this new position. Soon, his personal faith deepened to the point he felt called to full-time service as a Methodist minister. Ordained in 1903, he was assigned a pastorate at Scottsville, Kentucky, just twenty miles from his birthplace near Franklin.

Failing health cut short this ministry after only a year. He moved with his family to a farm near Winona Lake, Indiana. Winona Lake was the home of the summer Winona Lake Bible Conference. This conference attracted notable personalities in the fields of business, politics and entertainment. Among them was Billy Sunday, former Major League Baseball star and one of the most famous evangelists of the day.

Though Chisholm’s health never recovered to the point that he could take on another pastorate, he continued to write. His output includes over 800 poems, many of which were published as hymns.

In 1909, he took up a new career as a life insurance salesman. Chisholm moved to Vineland, New Jersey, in 1916. There, he successfully continued in life insurance until retirement at age 87 in 1953. Following retirement, he spent the remaining years of his life in a Methodist home for the elderly in Ocean Grove, New Jersey. He died in 1960, at the age of 93.

Remembered for Great is Thy Faithfulness

Today, Chisholm is particularly remembered for two hymns—Living for Jesus and Great is Thy Faithfulness. Without doubt, the latter is the most widely-popular of all his works. He wrote it as an expression of his deep appreciation to God for the “wonderful displays of His providing care.”

And now, let us hear our hymn as sung by tenor, Barry Craft.

William Marion Runyon was born on January 21, 1870, in Marion, New York. Son of a Methodist minister, he moved with his family to Kansas at an early age. A talented musician, he became a church organist at age twelve.

At age 21, he was ordained to the Methodist ministry. He served several churches before becoming evangelist for the Central Kansas, Methodist Conference in 1903.

Ironically, increasing deafness led Runyon to devote himself to writing, compiling and editing songs, particularly those suited for evangelistic services. Soon, he formed his own music publishing company.

Runyon publishes Great is Thy Faithfulness

Thomas O. Chisholm sent about two dozen of his poems, including Great is Thy Faithfulness, to Runyon. Sensing its appeal, Runyon included it in a collection entitled, Songs of Salvation and Service, published in 1923.

During his tenure at John Brown University, Sulphur Springs, Arkansas, Runyon was songbook compiler and editor of Christian Workers’ Magazine. Greatly encouraged by Daniel Brink Towner, music director of the Moody Bible Institute, Runyon moved to Chicago in 1925. There, he affiliated with the institute and served as music editor of the Hope Publishing Company.

Years later, Runyon related the circumstances that led to his writing the music for Great is Thy Faithfulness. He prayed for divine guidance that his music “might be worthy of these wonderful verses.” The resulting composition, entitled Faithfulness, is the one hymn tune for which he is remembered today.

Hymn and tune were favorites of Dr. William Henry Houghton, president of Moody Bible Institute from 1934-1947. Consequently, the hymn became the unofficial song of the institute. Runyon retired in 1948.

In a 1953 London Crusade, the Billy Graham Evangelistic Association featured Great is Thy Faithfulness. Sung by George Beverly Shea to Runyon’s tune, Faithfulness, the hymn achieved world-wide popularity. Fittingly, both Runyon, who died in 1957, and Chisholm lived to experience the acclaim for both hymn and tune. Today, it is widely included in both denominational and independent hymnals.

Thomas O. Chisholm must have been familiar with Lamentations 3:22-24 as he crafted the lines of Great is Thy Faithfulness.

The steadfast love of the Lord never ceases, his mercies never come to an end;
They are new every morning; great is your faithfulness. The Lord is my portion, says my soul, Therefore I will hope in him.

Consider also, these verses from the New Testament.

Every generous act of giving, with every perfect gift, is from above, coming down from the Father of lights, with whom there is no variation or shadow due to change.

Let us hold fast to the confession of our hope without wavering, for he who has promised is faithful.

And my God will fully satisfy every need of yours according to his riches in glory in Christ Jesus. To our God and Father be glory forever and ever. Amen.

And now, let us hear our hymn as presented by Tom Fettke and Billy Ray Hearn.