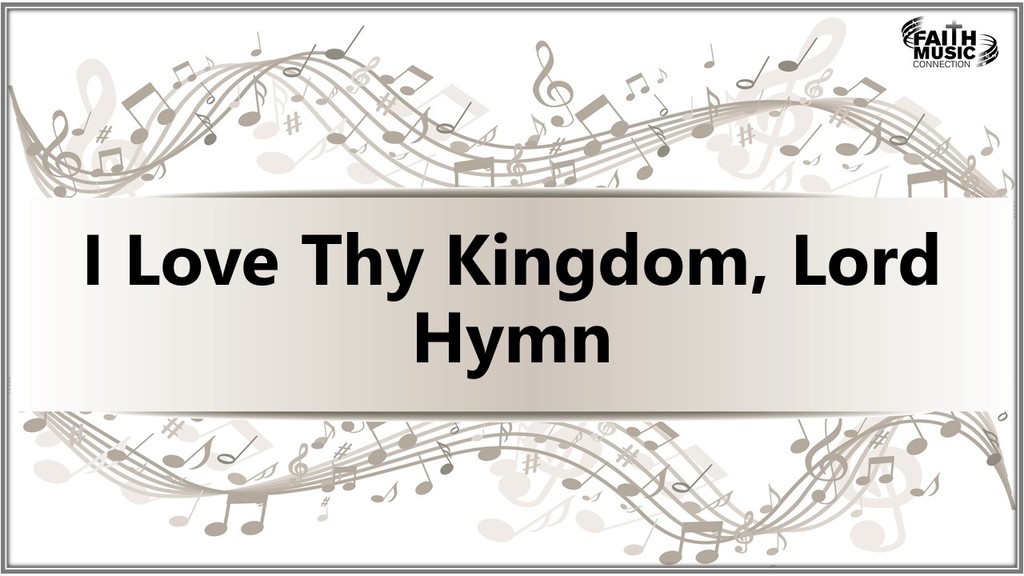 I Love Thy Kingdom, Lord– Introduction of the Hymn

Welcome to The Hymn of the Week. The eighteenth century was a time of spiritual revival in both Great Britain and in America. In England, John and Charles Wesley and George Whitfield led the movement, which became known as the “Great Awakening.” All three also preached in the American colonies, where the movement was spearheaded by Congregational Church preacher, Jonathan Edwards. Congregational singing of the Psalms, particularly the settings of Isaac Watts became quite popular.

The United States achieved independence by the end of the century. Not surprisingly, there was a demand for new metrical psalm settings that were less British in character. Among the many new publications to satisfy this demand, Timothy Dwight, grandson of Jonathan Edwards published a collection of 33 new Psalm settings. This collection, published in 1800, popularly known as “Dwight’s Watts,” contains probably the oldest hymn by an American author still sung today. That hymn, “I Love Thy Kingdom, Lord,” is … “The Hymn of the Week!” 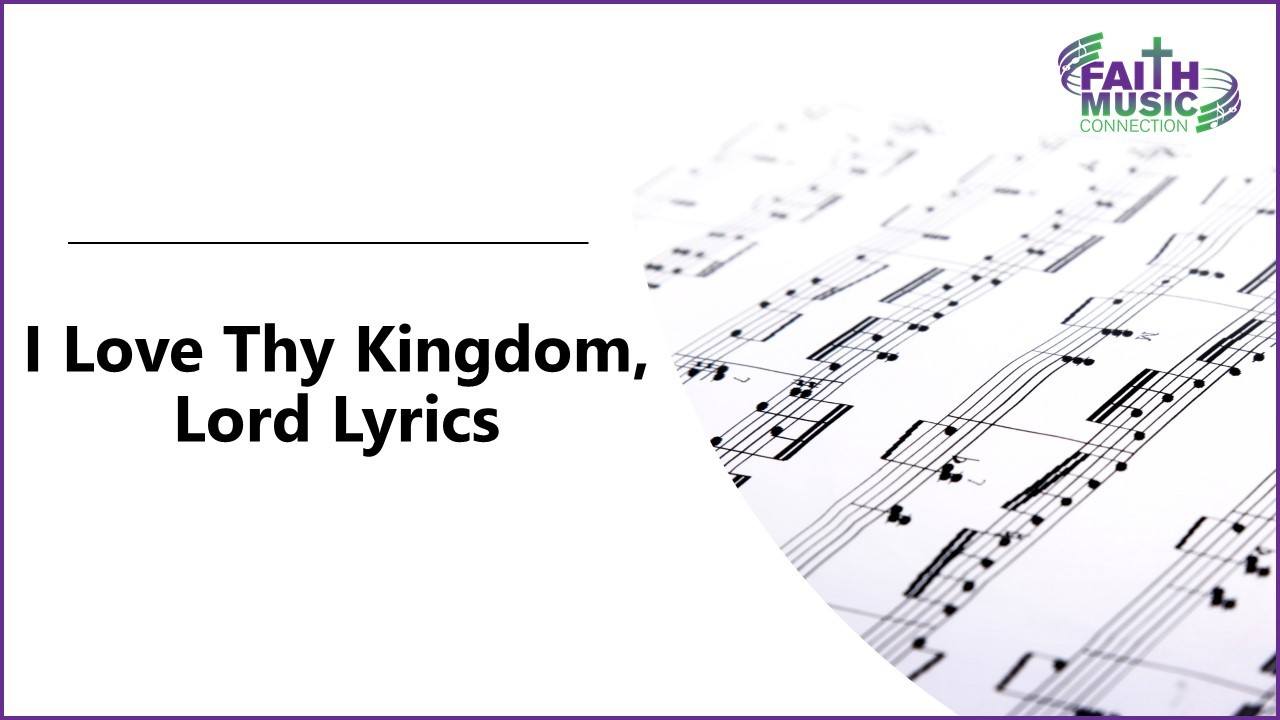 I Love Thy Kingdom, Lord: Hymn of the Week Radio Show Episode

Reading of I Love Thy Kingdom, Lord Lyrics

I love Thy kingdom, Lord,
The house of Thine abode,
The church our blessed Redeemer saved
With His own precious blood.

I love Thy church, O God.
Her walls before Thee stand,
Dear as the apple of Thine eye,
And written on Thy hand.

If e’er to bless Thy sons
My voice or hands deny,
These hands let useful skills forsake,
This voice in silence die.

Should I with scoffers join
Her altars to abuse?
No! Better far my tongue were dumb,
My hand its skill should lose.

For her my tears shall fall
For her my prayers ascend,
To her my cares and toils be given
Till toils and cares shall end.

Beyond my highest joy
I prize her heavenly ways,
Her sweet communion, solemn vows,
Her hymns of love and praise.

Jesus, Thou friend divine,
Our Savior and our king,
Thy hand from every snare and foe
Shall great deliverance bring.

Sure as Thy truth shall last,
To Zion shall be given
The brightest glories earth can yield
And brighter bliss of Heaven

And now, let us hear our hymn, performed by the Dallas Christian Adult Concert Choir.

Background of I Love Thy Kingdom, Lord

The eighteenth century was a time of evangelism and spiritual revival in both England and America. But it was not a time in which congregational singing flourished. As strange as it may seem to us, today, the Church of England officially discouraged congregational singing. Consequently, the church often punished evangelical leaders such as John and Charles Wesley and John Whitfield for their independent practices.

In the American colonies, the powerful preaching of Jonathan Edwards spearheaded a movement known as the "Great Awakening.” Despite this great spiritual revival, congregational singing was mostly confined to metrical versions of the Psalms. This had been the preferred practice since shortly after the landing of the Puritan pilgrims in Plymouth, Massachusetts. Indeed, the 1640 collection known as the “Bay Psalm Book” was the first book of any kind published in the American colonies. Curiously, not until the 1698 ninth edition was music—just thirteen tunes—included with the texts.

The “Great Awakening” led to the publication of many new Psalm settings, including versions by Isaac Watts (1674-1748). Watts wrote metrical versions of the Psalms and hymns based on emotion and experience common to most Christians. He is regarded as the “Father of English Hymnody.” Evangelical leaders in England and America highly favored Watts’ work.

In 1729, Benjamin Franklin reprinted many of Watts’ hymns and Psalm settings in Philadelphia., However, American Christians soon wanted Psalm settings in which King David’s words sounded less like those of an Englishman. As a result, American publishers produced many collections of Watts’ works as revised by American authors.

After the Revolutionary War, controversy arose over which edition of the Psalms should be sung in American Christian denominations. The conflict usually centered on whether to use original settings by Watts and his predecessors or newer American versions. Popular American versions included those by Joel Barlow and Timothy Dwight.

“I Love Thy Kingdom, Lord” was one of 33 original psalm paraphrases by Dr. Timothy Dwight, grandson of Jonathan Edwards. Dwight included it in his collection under the formal title, “The Psalms of David by Isaac Watts, Revised, 1800.” This collection was popularly known as “Dwight’s Watts." It included original settings by Dwight as well as revisions of Isaac Watts’ Psalm settings. Significantly, Dwight’s settings were in language better suited to Christians in the new republic known as the United States of America.

“I Love Thy Kingdom, Lord” is a part of Dwight’s metrical setting of Psalm 137. Modern hymnals usually omit the third, fourth and seventh of the original eight stanzas. Since the first publication in 1800, Americans continue to sing this hymn. Therefore, it is likely the oldest hymn by an American author still in common use today. Ironically, it is most often paired with the tune, “St. Thomas,” by English composer Aaron Williams.

And now, let us hear our hymn sung by your host, Larry Frazier, accompanied by organist Terry Lowry.

Aaron Williams, music engraver, publisher and teacher, published “St. Thomas,” in a London, 1763 collection, the “New Universal Psalmodist.” Born in 1731, Williams served as clerk of the Scottish Church, London Wall. He published several successful collections of metrical Psalm settings, including his own original tunes along with those of other composers.

After Williams’ death in 1776, Daniel Bailey published an American edition of the “New Universal Psalmodist” entitled “The American Harmony.” In this 1779 publication, Bailey paired Williams’ sturdy tune, “St. Thomas,” with “Great is the Lord Our God.” The tune proved to be much more durable than this hymn. Since the early 19th century, “St. Thomas” has retained its connection with “I Love Thy Kingdom, Lord.”

The imagery of Psalm 137 evokes emotion that lends itself to full expression in the abstract medium of music. In Giuseppe Verdi’s opera, “Nabucco,” a chorus of Hebrew slaves recall memories of happy times at the temple in Jerusalem. Verdi sets all of Psalm 137 in one of the greatest of all opera choruses, “Va Pensiero.” The metaphor of the longing of the Italian people for a united Italy was unmistakable. Consequently, this chorus became synonymous with Italian nationalism and pride. After Verdi’s death in 1899, people across Italy tearfully sang “Va Pensiero” in memory and homage of their beloved composer.

Consider Psalm 137:4-6.
“How could we sing the Lord’s song in a foreign land? If I forget you, O Jerusalem, let my right hand wither! Let my tongue cleave to the roof of my mouth, if I do not remember you, if I do not set Jerusalem above my highest joy.”

For Christians today, Psalm 137 is a poignant reminder of the joy of salvation of all believers through Jesus Christ. It may be easy to sing praises to God inside a church surrounded by believers of like spirit. But, outside those friendly walls, the captivity of a less spiritual world lurks. Even St. Peter, the rock on whom the church was built, denied, three times, that he knew Jesus.

Like Verdi for the Italians, Timothy Dwight, in his paraphrase set to “St. Thomas,” allows us to remember and sing.

“I Love Thy Kingdom, Lord, the house of thine abode. The church [both tangible and universal] our blest Redeemer saved with his own precious blood. Jesus, friend divine, our savior and our king. Thy hand, from every snare and foe, shall great deliverance bring with brightest glories earth can yield and higher bliss of heaven.” Amen!

Now, let us hear a setting of Psalm 137, beautifully performed by the Westminster Choir, with Martin Neary.