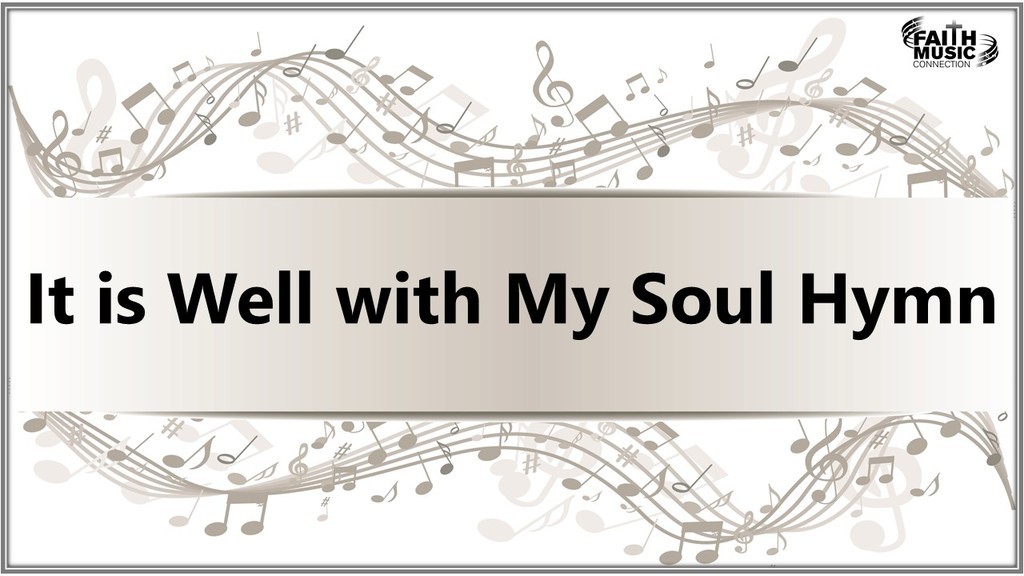 It is Well with My Soul – Introduction of the Hymn

Welcome to “The Hymn of the Week.” Throughout 2,000 years of Christian history, a variety of subjects inspire the creation of hymns. Many authors write hymns of praise or thanksgiving, prayerful hymns or hymns of service and discipleship. The natural beauty of God’s creation inspires many hymns. Death and tragic events continue to be a part of everyday life, testing the faith of even the strongest believers. Tragic circumstances often inspire great hymns of faith.

On November 22, 1873, an English ship collided with the French steamer, “Ville du Havre.” The French ship sank 15,000 feet into the cold Atlantic Ocean within twelve minutes. Four young daughters of a Chicago businessman Horatio Spafford were among the victims. A few days later, Spafford received a telegram sent by his wife from Cardiff, Wales: “Saved Alone. What shall I do?” He immediately returned to New York and set sail to join his distraught wife. This great tragedy inspired the only hymn Spafford ever wrote—” It is Well with My Soul,” “The Hymn of the Week.

Click Below for It is Well with My Soul Lyrics 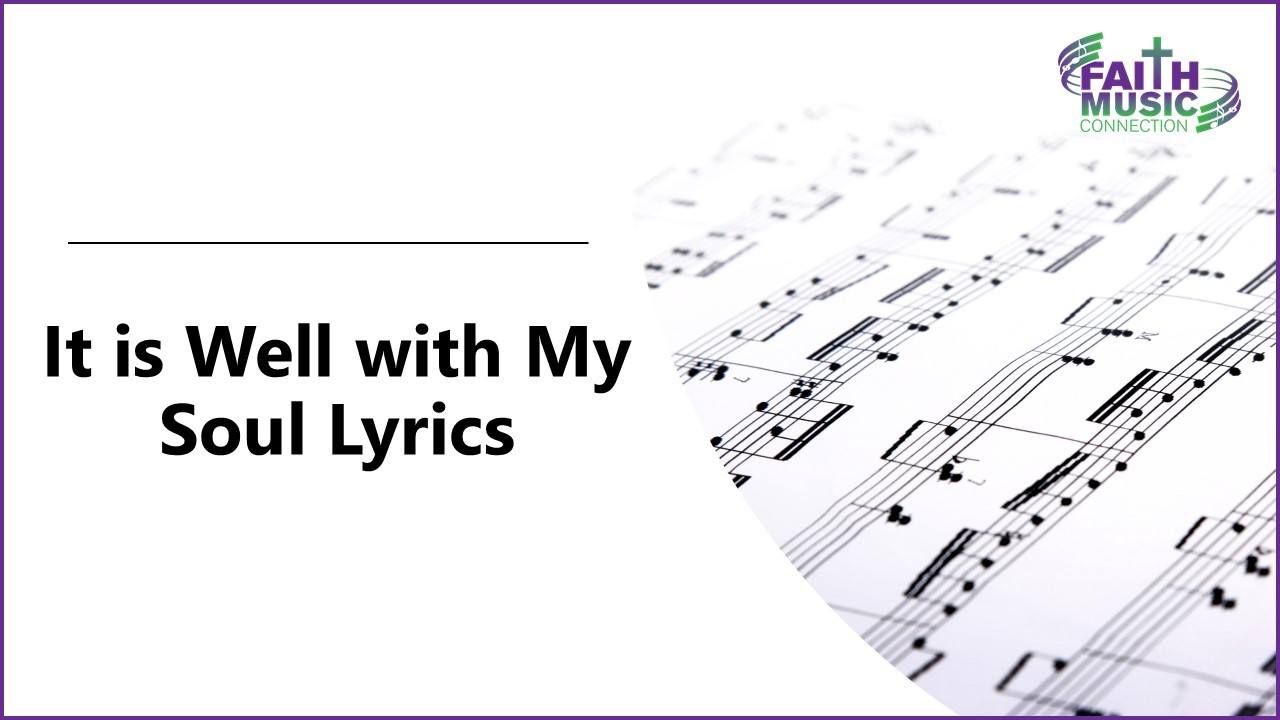 It is Well with My Soul: Hymn of the Week Radio Show Episode

Reading of the Text

When peace, like a river, attendeth my way,
When sorrows like sea billows roll;
Whatever my lot, Thou has taught me to say,
It is well, it is well, with my soul.

Though Satan should buffet, though trials should come,
Let this blest assurance control,
That Christ has regarded my helpless estate,
And hath shed His own blood for my soul.

My sin—oh, the bliss of this glorious thought—
My sin—not in part but the whole,
Is nailed to the cross, and I bear it no more,
Praise the Lord, praise the Lord, O my soul!

For me, be it Christ, be it Christ hence to live:
If Jordan above me shall roll,
No pang shall be mine, for in death as in life
Thou wilt whisper Thy peace to my soul.

But, Lord, ‘tis for Thee, for Thy coming we wait,
The sky, not the grave, is our goal;
Oh trump of the angel! Oh voice of the Lord!
Blessèd hope, blessèd rest of my soul!

And Lord, haste the day when my faith shall be sight,
The clouds be rolled back as a scroll;
The trump shall resound, and the Lord shall descend,
Even so—it is well with my soul.

And now, let us hear our hymn paired with the tune, “Ville du Havre,” performed by the York College Concert Choir.

Background of It is Well with My Soul

The early 1870s were difficult for Horatio G. Spafford, successful Chicago lawyer and businessman. First, his only son died in 1870. Then he suffered significant real estate losses in the great Chicago fire of 1871. Refusing to despair, he threw himself with renewed vigor into his legal and business affairs. His efforts were successful and in November 1873, he planned a family vacation to Scotland. Unexpected business demands interrupted these plans. Instead of cancelling, Spafford accompanied his wife and four daughters to New York. There, he booked them on the French steamer “Ville du Havre,” planning to meet them a short time later.

On November 22, 1873, an English ship collided with the “Ville du Havre.” The French ship sank 15,000 feet into the cold Atlantic Ocean within twelve minutes. A few days later, Spafford received a telegram sent by his wife from Cardiff, Wales: “Saved Alone. What shall I do?” He immediately returned to New York and set sail to join his distraught wife. Reports vary as to when Spafford wrote his only hymn which has provided comfort to so many. However, all confirm “It is Well with my Soul” was his incredible, inspiring response to the loss of his daughters.

And now, let us hear our hymn, beautifully presented by the Mormon Tabernacle Choir.

Philip Paul Bliss was born in Clearfield County, Pennsylvania, on July 9, 1838. He was intelligent and handsome and had a distinct talent for music. He worked on a farm during the summers as he pursued his general and musical education. Even after receiving his first position as a music teacher, he continued summer farm work for several years.

A charismatic personality with a fine baritone voice, Bliss soon became a singing evangelist. Root and Cady, leading publisher of sacred music, booked him for concerts throughout the eastern United States. Bliss also composed many popular gospel songs including, “Almost Persuaded,” “Let the Lower Lights be Burning,” and “Wonderful Words of Life.” He often collaborated with prolific author Ira Sankey.

Bliss named the music he wrote for “It is Well with My Soul,” “Ville du Havre.” It was first sung on November 24, 1876, in Chicago, at a meeting of evangelists arranged by Dwight L. Moody. A month after completing this tune, Bliss and his wife, his life-long accompanist, both died in a train wreck near Astabula, Ohio.

And now, let us hear an improvisation on “Ville du Havre,” played by pianist Terry Lowry.

Hymns are remarkable, poetic statements of faith of Christians throughout history. They demonstrate an ongoing connection to the earliest believers, whose stories as disciples of Jesus are recorded in the New Testament.

Tragic events often inspire great statements of faith. Few of us will have to endure a string of tragedies such as those faced by Horatio G. Spafford. Somehow, he was able to proclaim, like the Shunammite woman in 2 Kings 4:26, after the death of her only son, “It is well.” Though her son was ultimately brought back to life by the prophet Elisha, her faith must have resonated with Spafford. For he already knew, firsthand, that tragic circumstances do not always have happy endings. His response to the deaths of his four daughters continues to inspire us.

“For me, be it Christ to live.
The sky, not the grave is our goal.
And Lord, haste the day
When my faith shall be sight…
Whatever my lot, Thou hast taught me to say,
It is well; it is well with my soul.”