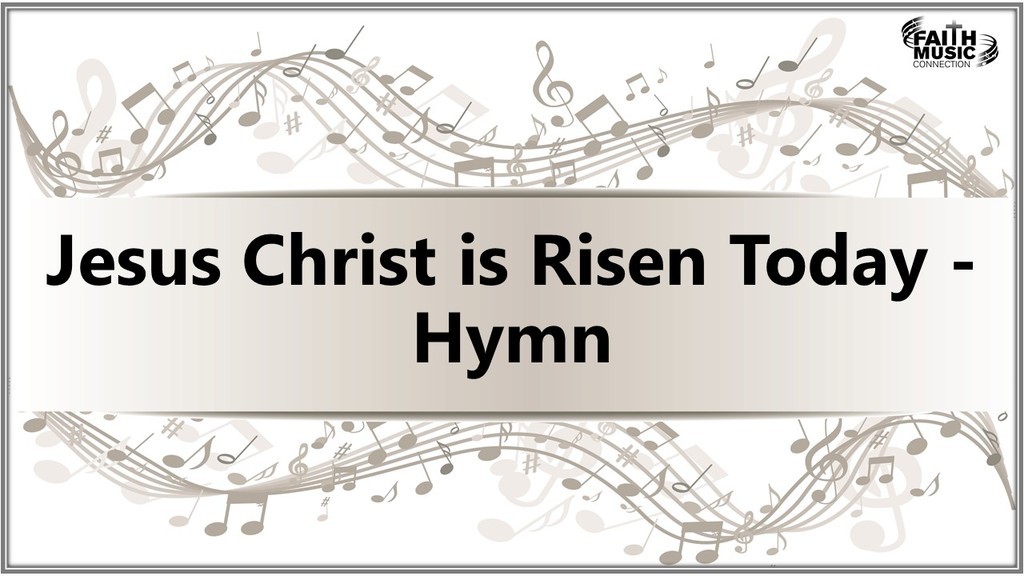 Jesus Christ is Risen Today– Introduction of the Hymn

Welcome to “The Hymn of the Week.” Here are two definitions of the word “pastiche.” 1) a literary work or musical composition made up of selections from different works. 2) a literary or musical work that imitates the style of previous work.

​“Jesus Christ is Risen Today” is a great hymn pastiche. It first appeared, paired with the tune, “Easter Hymn,” in 1708. Today, worshipers in both Catholic and protestant churches continue to sing this hymn, particularly on Easter Sunday. Surprisingly, the original author and composer are both unknown.

Click Below for Jesus Christ is Risen Today Lyrics 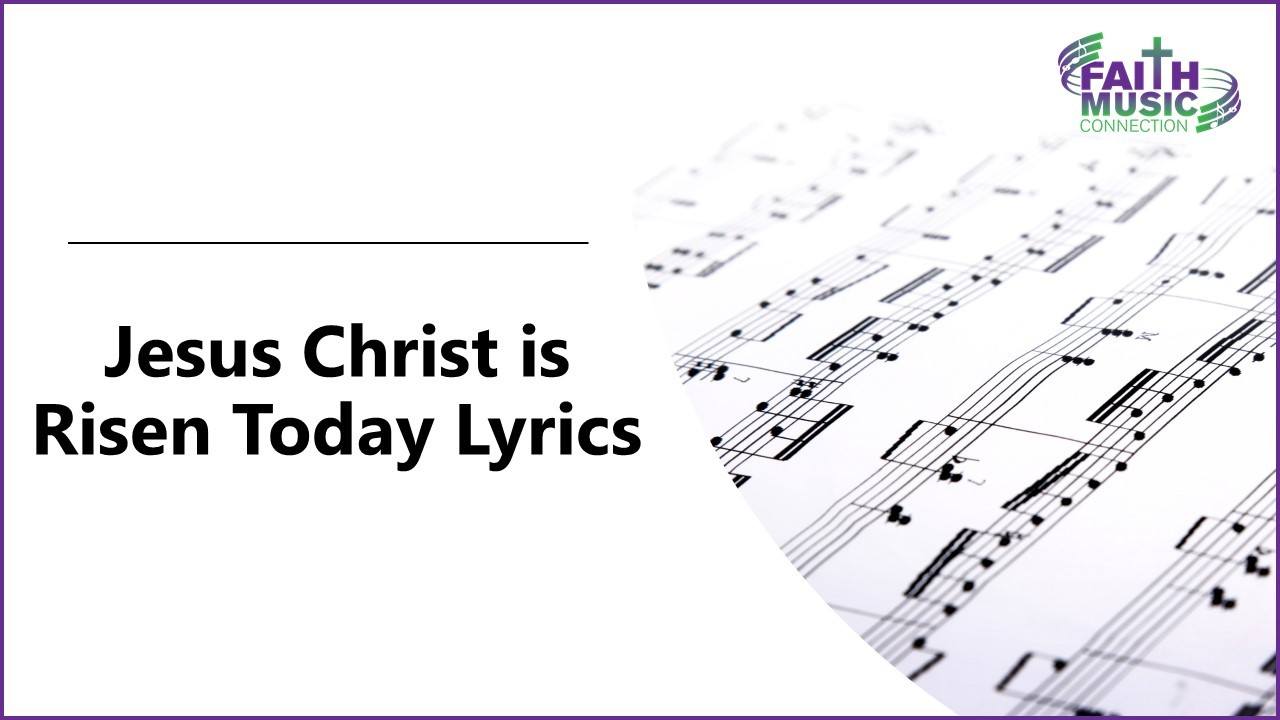 The first three stanzas of our hymn are from an anonymous, 14th-century Latin, Easter carol – “Surrexit Christus Hodie” (“Risen, is Christ today”). John Walsh first published this hymn. He also included translations of other Latin and German hymns in his 1708 collection. Below, is the original English translation published by Walsh.

Jesus Christ is risen today, Halle-halle-lujah.
Our triumphant holy day,
Who so lately on the cross
Suffered to redeem our loss.

Haste ye females from your fright,
Take to Galilee your flight;
To his sad disciples say,
Jesus Christ is risen today.

In our paschal joy and feast
Let the lord of life be blest;
Let the holy trine by praised,
And thankful hearts to heaven be raised.

41 years later, John Arnold published this hymn in “The Compleat Psalmodist,” 2nd edition, 1749. This publication included a slightly modified translation of the first stanza. In addition, it included completely new second and third stanzas. We sing these stanzas today. Iterestingly,  many modern hymnals also include a fourth stanza written by Charles Wesley as a doxology to this great resurrection hymn. This stanza first appeared in “Wesleyan Hymns and Sacred Poems," published in 1740.

Charles Wesley also wrote “Christ the Lord is Risen Today," an original hymn of 11 stanzas.  Editors often pair Wesley’s hymn with the tune “Easter Hymn.” It first appeared in the 1739 London publication, “Hymns and Sacred Poems.” “Jesus Christ is Risen Today” is often confused with Wesley’s hymn. First, both hymns are in the same meter. Second, we sing both to the same tune with added “Alleluias” at the end of each line of verse. Third, Wesley used the three original stanzas of “Jesus Christ is Risen Today” as stanzas eight, through ten of his hymn. Furthermore, Wesley's previously-mentioned fourth stanza doxology also adds to the confusion.

And now, we hear the tune “Easter Hymn,” arranged and performed by organist William Neil.

“Easter Hymn” is the tune most often paired with “Jesus Christ is Risen Today.” John Walsh published this combination in London, in 1708, in “Lyra Davidica” (“Harp of David”). Curiously, Walsh credited no composer for the tune. “Easter Hymn is consistent in style with other early, 18th-century tunes. However, it also anticipates the more exuberant tunes of the evangelical revival later in the century. According to the preface, the tunes in “Lyra Davidica” provide freedom from the more somber movement of the prevailing Psalm tunes. In addition, the collection also provided the first English printing of several German hymn tunes.

John Arnold published “Easter Hymn” in a modified form resembling the one we sing today in “The Compleat Psalmodist,” London, in 1741. A second edition followed in 1749. Over 100 years later, editor William Henry Monk included this tune in “Hymns Ancient and Modern.”

John Wesley included “Easter Hymn” in his “Foundery Collection,” London, 1742. His brother Charles Wesley also liked this tune. Accordingly, he wrote a concluding fourth-stanza doxology to “Jesus Christ is Risen Today.” In addition, Charles Wesley wrote his own resurrection hymn, “Christ the Lord is Risen Today,” to be sung to the “Easter Hymn” tune. He first published this hymn in London in 1739.

The meter of “Easter Hymn” is 7.7.7.7 with Alleluias. Stated another way, the structure is four lines of seven syllables each, plus an “Alleluia”). The melody begins on the tonic. And the first four melody notes outline the tonic triad. The remainder of the melody for each line of verse follows the “saw-tooth” pattern of the traditional Psalm tune. This pattern consists of one note per syllable. In addition, this structure also outlines the principle diatonic chords. Melismatic “Alleluias” conclude each line in an exuberant style so favored by the Wesleys and other 18th-century evangelicals.

The highest melody note occurs in the middle of the third line of music on the words, “cross,” “grave” and “king.” Significantly, in the fourth stanza the highest note is sung on the word “host.” Thus, the music emphatically summarizes the themes suggested in the hymn title, “Jesus Christ is Risen Today.”

And now, we hear “Easter Hymn,” as performed by The New England Christmastide Musicians.

The title of our hymn, “Jesus Christ is Risen Today,” is the central theme of Easter in all Christian churches. But it is also appropriate for every day of the year. Catholic, Orthodox and Protestant churches underscore this principle by following a liturgical form of worship based on the Mass, including communion. Because “Jesus Christ is Risen Today,” every day is every Christian’s “triumphant holy day.” Further, Jesus Christ “did once, upon the cross, suffer to redeem our loss.” And thus, “The pains which He endured, our salvation have procured.”

Therefore, All Christians can join in singing “hymns of praise…unto Christ, our heavenly King. Alleluia!” “Now above the sky he’s king.” Our savior and lord, Jesus Christ is fully human, yet fully divine and one with God. He eternally reigns above. Therefore, “Jesus Christ is Risen Today” encompasses past, present and future for all believers. Thanks be to God that we can sing of this unspeakable gift. Alleluia and Amen!

And now, let us hear our great hymn, triumphantly performed by The Choir of Kings College, Cambridge, under the direction of Phillip Ledger.