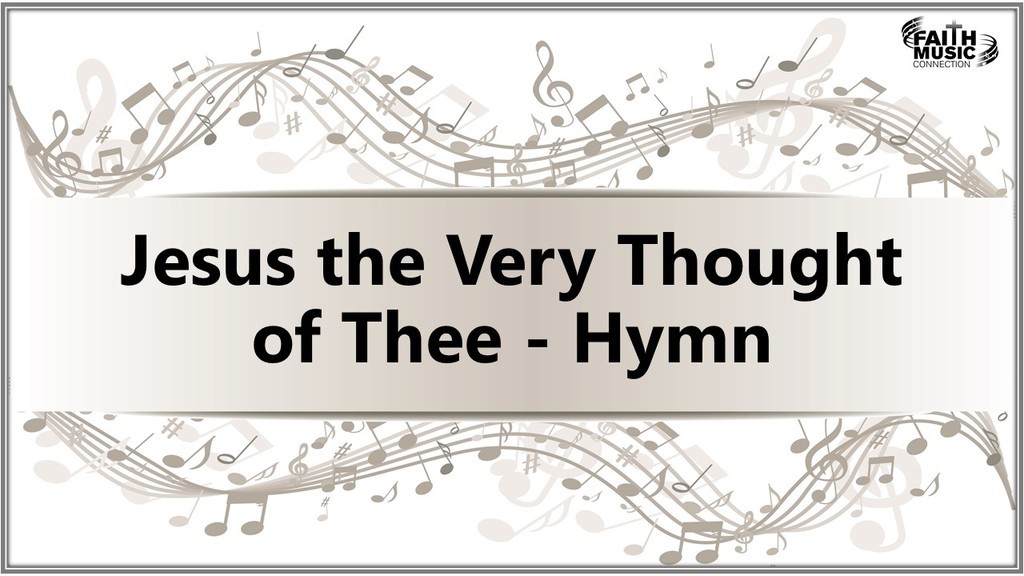 Jesus the Very Thought of Thee – Introduction of the Hymn

Welcome to “The Hymn of the Week.” Take a beautiful meditation on the holy name of Jesus. These words have inspired numerous composers. The translation into English of the first five stanzas by Edward Caswall enables this hymn to reach out to many Christians. It is also an ideal hymn for Lent. “Jesus the Very Thought of Thee”—"The Hymn of the Week!”

Click Below for Jesus the Very Thought of Thee Lyrics 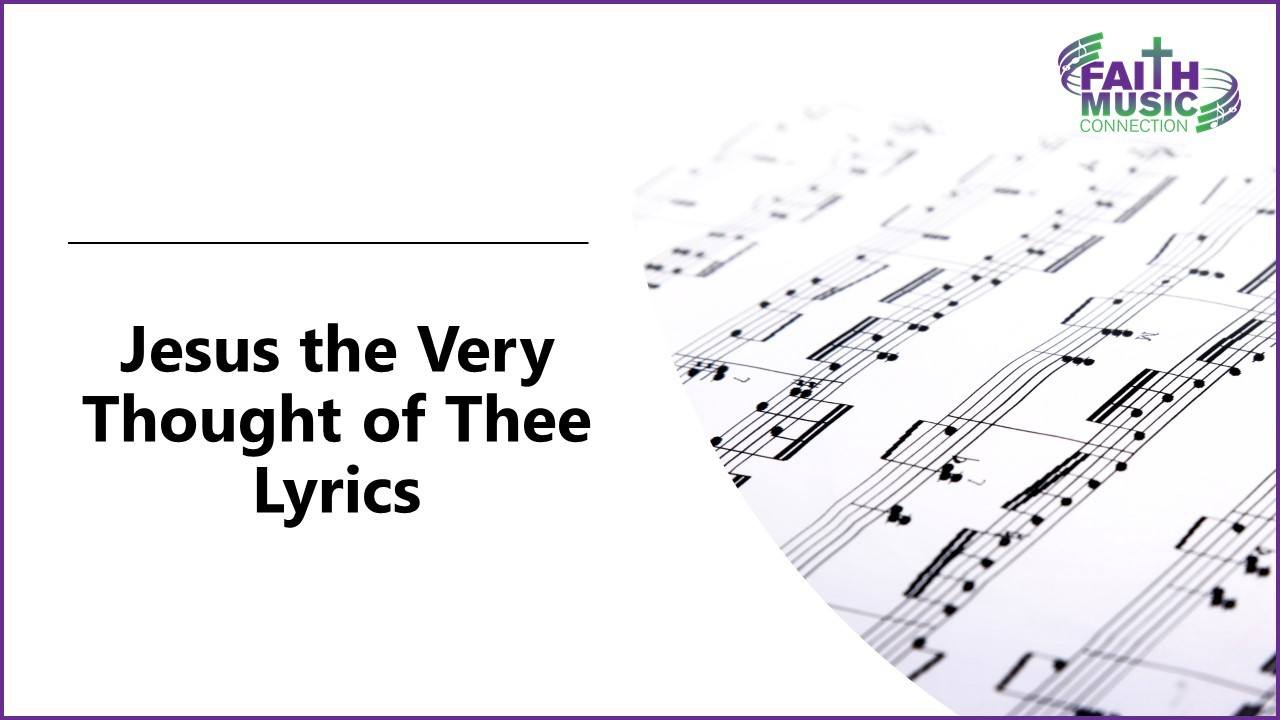 Jesus the Very Thought of Thee: Hymn of the Week Radio Show Episode

Reading of Jesus the Very Thought of Thee Lyrics

Jesus, the very thought of Thee
With sweetness fills the breast;
But sweeter far Thy face to see,
And in Thy presence rest.

Nor voice can sing, nor heart can frame,
Nor can the memory find
A sweeter sound than Thy blest name, O
Savior of mankind!

O hope of every contrite heart,
O joy of all the meek,
To those who fall, how kind Thou art!
How good to those who seek!

But what to those who find? Ah, this
Nor tongue nor pen can show;
The love of Jesus, what it is,
None but His loved ones know.

Jesus, our only joy be Thou,
As Thou our prize will be;
Jesus be Thou our glory now,
And through eternity.

O Jesus, King most wonderful
Thou Conqueror renowned,
Thou sweetness most ineffable
In whom all joys are found!

When once Thou visitest the heart,
Then truth begins to shine, Then
Earthly vanities depart,
Then kindles love divine.

O Jesus, light of all below,
Thou fount of living fire,
Surpassing all the joys we know,
And all we can desire.

Jesus, may all confess Thy name,
Thy wondrous love adore,
And, seeking Thee, themselves inflame
To seek Thee more and more.

Thee, Jesus, may our voices bless,
Thee may we love alone,
And ever in our lives express
The image of Thine own.

O Jesus, Thou the beauty art
Of angel worlds above;
Thy name is music to the heart,
Inflaming it with love.

Celestial sweetness unalloyed,
Who eat Thee hunger still;
Who drink of Thee still feel a void
Which only Thou canst fill.

O most sweet Jesus, hear the sighs
Which unto Thee we send;
To Thee our inmost spirit cries;
To Thee our prayers ascend.

Abide with us, and let Thy light
Shine, Lord, on every heart;
Dispel the darkness of our night;
And joy to all impart.

Jesus, our love and joy to Thee,
The virgin’s holy Son,
All might and praise and glory be,
While endless ages run.

And now, let us hear our hymn, paired with the tune, “St. Agnes,” performed by The London Philharmonic Choir

Background of Jesus the Very Thought of Thee

Although not unanimous, both Catholic and non-Catholic hymn scholars attribute authorship of “Jesu, dulcis memoria” to St. Bernard of Clairvaux. Bernard was one of the most influential leaders, ecclesiastical and secular, of the 12th century. The original poem of over fifty stanzas, which translates as “Jesus, Sweet Remembrance,” reflects the deep faith of the author.

Bernard was born about 1090 to French parents of noble blood. He was educated at Chatilon, where he was an outstanding student, much devoted to his studies and to mystic meditation. The death of his mother in 1105 had a profound effect on him. He gave up the advantages of his noble birth, intelligence, charisma and physical skills for the ascetic life of a monk.

In 1113, Bernard entered a monastery at nearby Citeaux. This was the first monastery formed by a group of Benedictine monks intent on restoring discipline and devotion within the order. Bernard became a leader among these monks, whose lives were marked by devotion, hard physical labor, contemplation and prayer. Soon, he was charged with in establishing new monasteries for the reformers who became known as the Cistercians. Bernard’s ardor and resourcefulness were instrumental in the growth of the Cistercian order and to subsequent recognition by the pope in Rome.

Bernard’s leadership skills were almost legendary. In 1130, following the death of Pope Honorius II, the College of Cardinals could not come to an agreement on a new pope. Consequently, they broke into two factions, each electing a different candidate to become the holy see. A period of ecclesiastical and political uncertainty followed. Bernard’s influence was great. The French bishops, French King Louis VI, England’s King Henry I and German emperor Lothar agreed to follow Bernard’s decision of who was the rightful pope. Ultimately, Bernard supported Innocent II, who was universally recognized as pope in 1139.

Bernard returned to Citeaux after four years of service to the pope in Rome. He continued to make trips to the Vatican to exert his influence in ecclesiastical matters. Charged to raise an army of crusaders to Palestine, he recruited the king of France and the emperor of Germany. These royals were joined with huge numbers of people from all classes. However, of the thousands who embarked in 1147, only a small fraction made it to the Holy Land. After a disasterous defeat, Bernard was blamed for the failure of the crusade. This weighed heavily on him until his death a few years later in 1153.

In addition to his heroic accomplishments outside the monastery, Bernard was also a contemplative man of prayer. He produced several long poetic and theological works on the nature, life and passion of Jesus Christ. Almost four centuries later, Martin Luther, himself a monk and leader of the Reformation admired Bernard, by then a saint. Luther described St. Bernard as, “The best monk that ever lived, whom I admire beyond all the rest put together.”

Edward Caswall translated Bernard’s “Jesu, dulcis memoria” into English in 1849. Born in Hampshire, England, in 1814, son of an Anglican priest, Caswall was an honor graduate of Brasenose College, Oxford. He was ordained in the Church of England in 1840. Like many others, he was influenced by a desire for a return to greater piety and formality of liturgy within the church. These ideals became known as the Oxford Movement. Caswall switched to Roman Catholicism in 1847.

Following the death of his wife, Caswall began translating many Latin texts into English, including those of St. Bernard. “Jesus the Very Thought of Thee” first appeared in Caswall’s “Lyra Catholica,” published in London, in 1849. It is, perhaps, the most widely sung of his translations, which also include “When Morning Gilds the Skies.” Caswall was ordained a Catholic priest in 1852, and he fulfilled his new calling until his death in 1878.

And now, we hear “Jesus the Very Thought of Thee,” as set for vocal solo by 20th-century English composer Eric Thiman. Your host, Larry Frazier, bass, is accompanied by pianist Terry Lowry.

The tune “St. Agnes” was composed specifically for “Jesus the Very Thought of Thee” by John Baccus Dykes. It was first published in London, in 1866, in Grey’s “Hymnal for Use in the English Church.” Born in 1823 in Hull, England, Dykes distinguished himself as a scholar at a young age. Though concentrating on the classics, he was also an accomplished musical artist. He became assistant organist at St. John’s Church in Hull when he was just ten years old. Dykes completed his formal education at Wakefield and at St. Catherine’s College, Cambridge, and was ordained in the Church of England.

Dykes was a prolific writer whose sermons and religious articles were widely published. In addition, he published over 300 hymn tunes, including “Melita,” which is associated with the sailors’ hymn, “Eternal Father, Strong to Save.” This hymn and tune were played in ceremonies following the deaths of U.S. presidents Franklin D. Roosevelt and John F. Kennedy. Other Dykes tunes include, “Nicea,” the favorite tune universally paired with “Holy Holy Holy.” “St. Agnes,” “Melita” and “Nicea” represent some of the finest examples of Victorian hymn tunes. Marked with rich harmonies and melodies in accord with popular music of the day, these tunes encouraged renewed congregational singing.

The melody of “St. Agnes” is simple and direct, with an easy flow and limited range. This makes it most accessible for congregational singing by all voices, high or low. Harmony parts for alto and tenor feature generally step-wise movement. In contrast, the bass contains several leaps in contrary motion or opposite direction to those of the melody in soprano. The meter of this hymn is 8.6.8.6, which is known as “common meter.” In this meter, the four lines of verse in each stanza follow the pattern of eight syllables followed by six syllables. A limited use of chromatics enriches the harmony and enhances the contemplative nature of the text.

A great hymn has a unique ability to inspire us today. Hymns are the poetic testimonies of people throughout history who have lived out their faith in good times and bad. Together with scripture, hymns invite us to discover anew the love of God. Further, they also invite us to share this love in worship with other believers and in lives of true discipleship.

Contemplation of the nature of Jesus Christ and his call to discipleship has always been an important discipline for Christian believers. St. Bernard’s wonderful hymn is accessible to English-speaking Christians by the lyrical translation of Edward Caswall. Clearly, it is just as relevant for us today as it was for the author, almost 900 years ago.

Jesus, may all confess Thy name,
Thy wondrous love adore,
And, seeking Thee, themselves inflame
To seek Thee more and more.

Thee, Jesus, may our voices bless,
Thee may we love alone,
And ever in our lives express
The image of Thine own.

O Jesus, Thou the beauty art
Of angel worlds above;
Thy name is music to the heart,
Inflaming it with love.

Celestial sweetness unalloyed,
Who eat Thee hunger still;
Who drink of Thee still feel a void
Which only Thou canst fill.

O most sweet Jesus, hear the sighs
Which unto Thee we send;
To Thee our inmost spirit cries;
To Thee our prayers ascend.

Abide with us, and let Thy light
Shine, Lord, on every heart;
Dispel the darkness of our night;
And joy to all impart.

Jesus, our love and joy to Thee,
The virgin’s holy Son,
All might and praise and glory be,
While endless ages run.

And now, let us hear our hymn, beautifully played by Michael Dowdle, guitar.