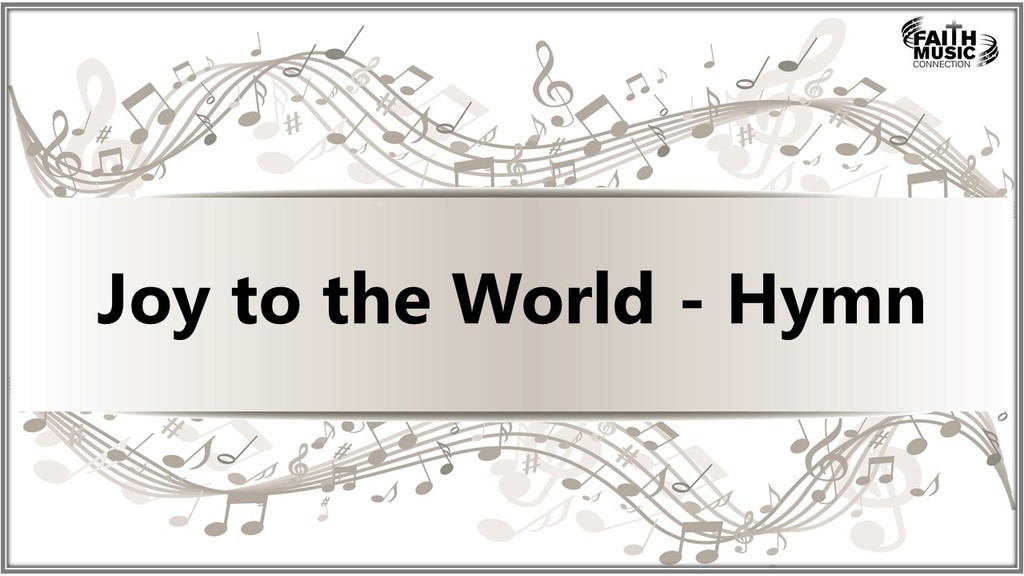 ​Joy to the World - Hymn

Joy to the World –
Introduction of the Hymn

Welcome to The Hymn of the Week. One of the most joyous and popular hymns associated with Christmas was not intended as a Christmas carol. Instead, it was written as a paraphrase of Psalm 98. Many Christian scholars connect this Psalm with the second coming of Christ.

Both the 17th-century author and the 19th-century composer wrote many hymns and hymn tunes, respectively. A number remain popular today, including the pairing we know as “Joy to the World”—"The Hymn of the Week!”

Joy to the World: Hymn of the Week Radio Show Episode

Reading of Joy to the World Lyrics

Joy to the world, the Lord is come!
Let earth receive her King;
Let every heart prepare Him room,
And Heaven and nature sing.

Joy to the earth, the Savior reigns!
Let men their songs employ;
While fields and floods, rocks, hills and plains
Repeat the sounding joy.

No more let sins and sorrows grow,
Nor thorns infest the ground;
He comes to make his blessings flow
Far as the curse is found.

He rules the world with truth and grace,
And makes the nations prove
The glories of His righteousness,
And wonders of His love.

Background of Joy to the World

Isaac Watts, author of “Joy to the World,” is universally known as the “Father of English Hymnody.” He was born in Southampton, England, in 1674, to devout Calvinistic parents, who were often persecuted for their “non-conformist” beliefs. At a very early age he showed a propensity for books and poetry. By the age of thirteen he had learned Latin, Greek, French and Hebrew.

Several prominent local citizens offered to finance a university education for him. Instead, he enrolled in the non-conformist academy of Thomas Rowe at Stoke Newington on the outskirts of London.

After leaving the academy, Watts served a assistant pastor of the Mark Lane Independent Chapel, London. He became pastor in 1702, a position he retained for the rest of his life.

With the Abneys at Hertfordshire

In 1712, Sir Thomas Abney invited the seriously ill Watts to live at his estate at Hertfordshire. Though he recovered, his health remained frail. He continued to live with the Abneys, tutoring their children and writing sermons, hymns and many books. Oxford University used one of Watts’ books, “Logic,” as a textbook for many years.

Isaac Watts died in 1748, at the age of 74. Though only five feet tall, he was a well-loved giant of a man. Fittingly, his country honored him after his death with a statue in the Poets’ Corner of Westminster Abbey.

Isaac Watts wrote most of his 600 hymns before he reached the age of 30. In contrast to the half-hearted Psalm-singing characteristic of the times, Watts wrote “hymns of human composure.” The were often in the first person, expressing the language of the New Testament. This allowed Christians, then and now, to sing of their personal faith and experience.

Among his hymns are many new paraphrases of the Psalms, including “Joy to the World” (Psalm 98.) Also, “Jesus Shall Reign Where ere the Sun (Psalm 72) and “O God, Our Help in Ages Past” (Psalm 90). Watts also wrote many hymns still widely sung today. These include, “I Sing the Mighty Power of God,” “Come Holy Spirit Heavenly Dove,” “Am I a Soldier of the Cross,” “Alas and Did my Savior Bleed,” “When I Survey the Wondrous Cross” and many others.

Watts also enjoyed working with children. His “Divine and Moral Songs for Children,” published in 1715, is still popular today.

Joy to the World - Paraphrase of Psalm 98

"Joy to the World" first appeared in 1719 in a collection restating the Psalms in New Testament, Christian language. In contrast to current usage, it was not originally intended as a Christmas hymn. Instead, author, Isaac Watts, wrote it as a paraphrase of Psalm 98:4-9, focusing more on the second coming of Christ.

In his paraphrase Watts, with poetic grace, beautifully restates the Psalm text into lyric Christian verse. He encompasses both Old and New Testament theology of Christ as child and king, creating a wonderful Advent hymn.

Watts wrote "Joy to the World" in a metrical pattern known as "common meter." This meter consists pairs of poetic verses with lines of eight syllables followed by lines of six syllables.

This pattern can also be notated 8.6.8.6.And now, let us hear our hymn performed by the Worcester Cathedral Choir, followed by The United States Air Force Band & the Singing Sergeants.

Lowell Mason was born in Medfield, Massachusetts, in 1792, the son of a mechanic of limited financial resources. He had a great passion for music from his earliest years. He learned to play several instruments, but he excelled as a singer. By the age of 16, he was teaching classes on singing.

He left Massachusetts at the age of 20 and moved to Savannah, Georgia, to make his mark as a banker. In Savannah, he continued his music studies with the German teacher, Frederic Abel. Soon, he became director of music, organist and choirmaster at the Independent Presbyterian Church. There, he established music classes in the Sunday School, teaching children rudimentary music skills using hymns and other church music.

Lowell Mason and The Handel and Haydn Society

Mason also began to compose, arranging Psalm tunes and music by Handel, Haydn, Mozart and Beethoven with his own compositions. The Handel and Haydn Society published his first collection in Boston in 1821. This prestigious organization was devoted to the promotion and performance of classical music. They titled Mason’s work, “The Boston Handel and Haydn Society’s Collection of Church Music,” assuring its success. Because of this, Mason ultimately returned to Massachusetts in 1827.

Father of Music Education in the United States

Mason established the Boston Academy of Music in 1833. He was appointed Superintendent of Music for the Boston school system in 1838. During this period, he wrote the music—entitled “Antioch,” for “Joy to the World.” He published this in Boston, in 1839, in his collection, “Modern Psalmist.”

Mason attributed the basis for “Antioch” to the music of George Frideric Handel. Ironically, Handel and Watts were contemporaries in London. But there is no conclusive evidence of any origin other than of Mason himself. He added a two-line refrain to Watts’ original four lines of verse per stanza by repeating the last line. This addition provides increased musical emphasis to these important phrases of text.

"Hamburg" and "When I Survey the Wondrous Cross"

All totaled, he wrote over 1600 church music compositions. These include music for numerous familiar and popular hymns. “Hamburg,” now universally paired with another Isaac Watts’ “When I Survey the Wondrous Cross is a notable example.

In 1851, Mason moved to New York City to be closer to his sons, one of whom was a concert pianist. The other was a principal in the Mason and Hamlin Company, builder of fine pianos until late in the 20th century.

Following a trip to Germany, he embraced the ideal of congregational singing as the basis for music in worship. He built a great program of congregational singing as Director of Music at Fifth Avenue Presbyterian Church. There he served for seven years until retirement to his estate in Orange, New Jersey, in 1860. Lowell Mason remained active in church music until his death in 1872.

And now, let us hear the tune, “Antioch,” as performed by the Kalamazoo Ringers, followed by the Empire Brass.

Devotion or Scripture
Related to Joy to the World

“Joy to the World” is a beautiful paraphrase of Psalm 98. It encompasses Old and New Testament passages on the coming of Christ and his ultimate kingship over heaven and earth. Watts phrases the entire hymn in present tense. This connects the past—the birth of Jesus—the present and the future—the apocalyptic return of Christ. Because of this synthesis, we can appropriately sing this hymn at any time of the year.

According to Psalm 98, “all the ends of the earth make a joyful noise to the Lord.” Watts poetically synthesizes these exhortations into, “Let every heart prepare him room, and heaven and nature sing!”

Two centuries later, Mason provided melody for these lyrics which continues to resonate in our hearts. Thus, we are encouraged to joyfully sing of the true meaning of Christmas. Thank you, Isaac Watts and Lowell Mason for this great hymn, “Joy to the World, the Lord is Come!”

And now, let us hear our hymn as performed by the American Boychoir.