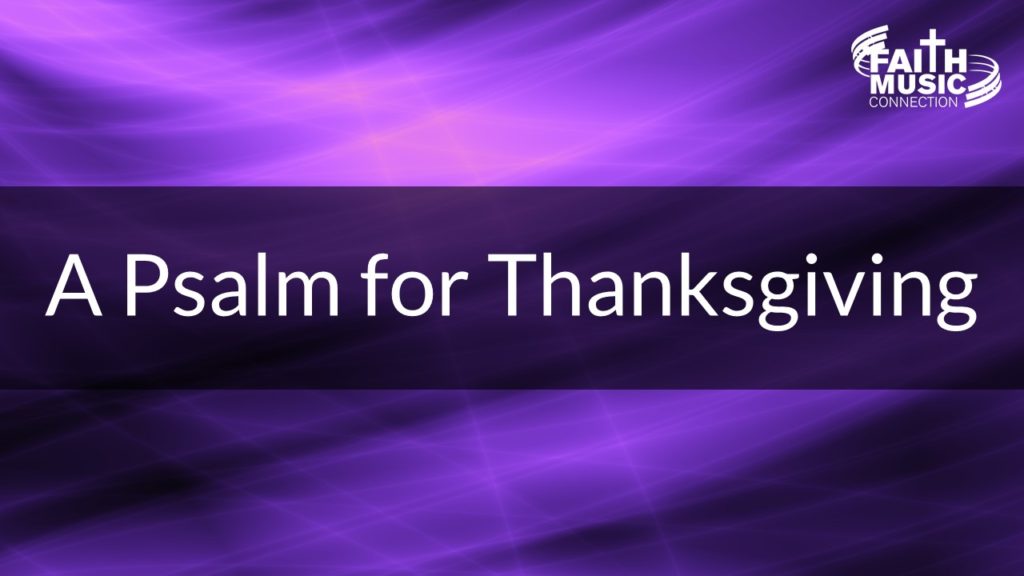 A Psalm for Thanksgiving

Can you say “bad year”? The bad year for me was 1968. Tenth grade and I liked a girl, Jacquie Sue, and she didn’t like me. I was 6’ tall and weighed 140. If I had shaved off the sideburns I would have weighed in at 130. My Adam’s apple weighed 10 pounds; you get the picture. That was a tough year.

It was also a tough year for our country. Why? Two assassinations—Martin Luther King, Jr. and Senator Bobby Kennedy, that’s why.

It was also a bad year if you lived in Leipzig, East Germany. There was a church there, the University Church, an old historic church. The Communists and their leader, Walter Ulbricht, head of the Communist party, hated that church. He hated that church because it reminded him of the Christian way of life that he despised, and so they blew it up. They blew up the church. You could hear the tears being shed as the dynamite went off. Witnesses said the church was suspended in mid-air and then fell to the ground in a pile of rubble.

What made it worse was what was inside the church—an organ. But not just any pipe organ. It just happened to be the one played by Johann Sebastian Bach. It was the only organ good enough for him and his students. You see Bach had been the music director at that church for years. Every Sunday beginning at 7:00 the church met for a three-hour service, including a 30-minute cantata that Bach had written, complete with 16 voices and 18 instruments.

They blew up the church and destroyed the great organ, but guess what? You can’t kill the church or the church’s music. You can’t destroy the faith of God’s children who want to gather in worship and give thanks. So, a few years ago, on the 250th anniversary of Bach’s death, they rebuilt the church and got a new pipe organ—one that would have made Bach proud. It cost 1.2 million dollars and has 4,800 pipes. With that story as a backdrop, I share a translation of the 100th Psalm for your Thanksgiving season.

“A Psalm for Thanksgiving”
Raise a shout to Yahweh, all the earth!
Worship Yahweh with gladness,
Come before Him with joyful songs.
Confess that Yahweh, He is God.
He made us, and we are His and the flock He shepherds.
Enter His gates with thanksgiving,
His courts with praise;
Give thanks to Him, and bless His name.
For Yahweh is good; His steadfast love is forever,
And to generations is His faithfulness.
So, give thanks for a turkey leg, dressing, and a pipe organ. I’m grateful that I now weigh more than my Adam’s apple.

NOTE: The above message is by my friend and pastor, Dr. Steve Davis, pastor of First Baptist Church, Carrollton, Georgia. (Used by permission of the author.)