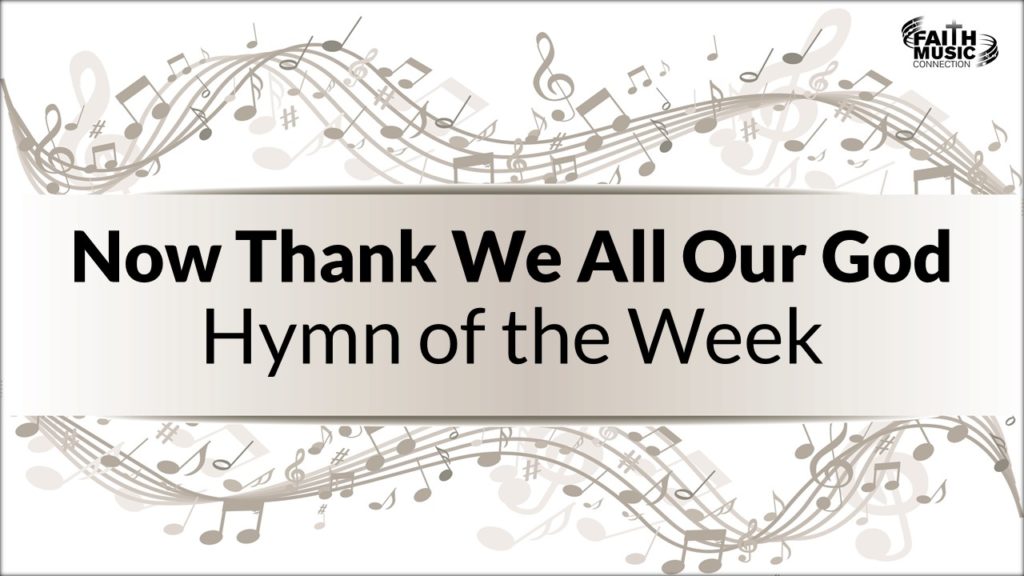 Welcome to The Hymn of the Week.  The times were desperate—a walled city under siege, overcrowded with refugees, ravaged by hunger, lack of shelter, poor sanitation, disease and death at every corner—during the creation of this week’s hymn, Now Thank We All Our God.  This great hymn, with both text and tune from seventeenth-century Germany during the times of the Thirty Years War, is a beautiful expression of an attitude of thankfulness for the blessings of life and an abiding faith in the grace of a loving God who will “free us from all ills, in this world and the next,” as well as, perhaps, a challenge to us, living among the achievements and challenges of today’s world, to cultivate a spirit of humble thankfulness for the blessings we enjoy.

Click below for the Now We Thank All Our God lyrics. 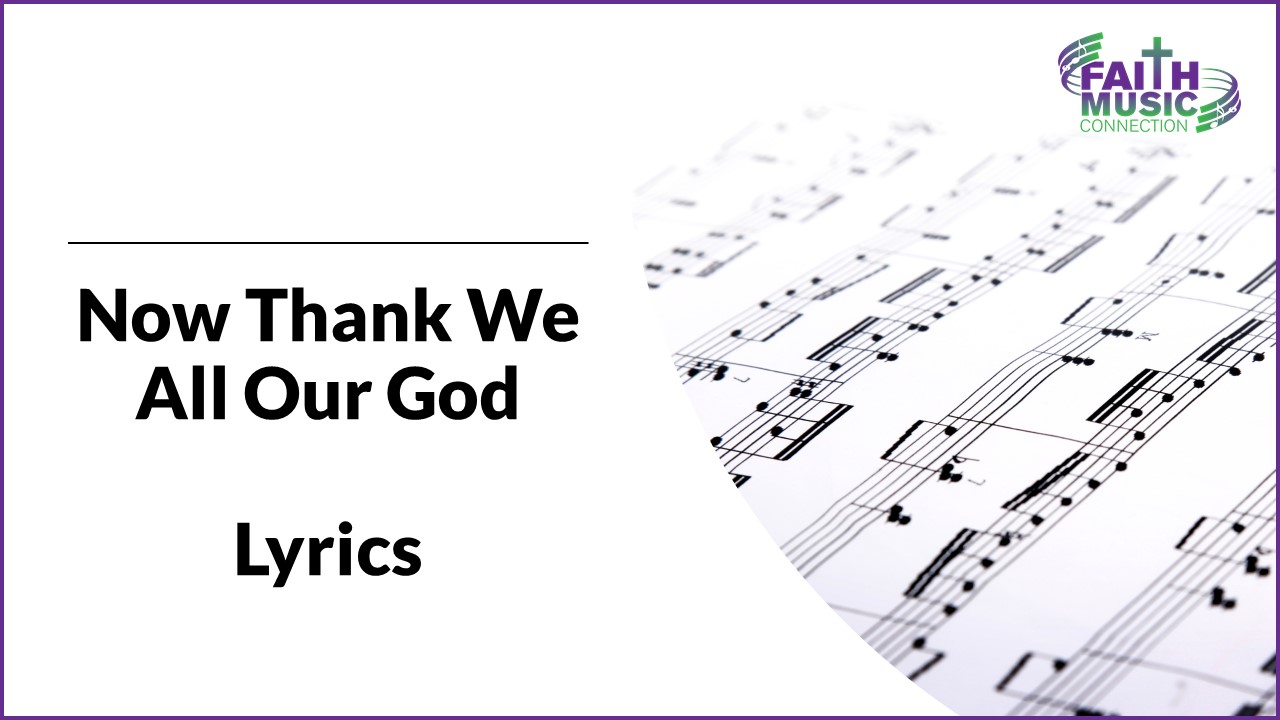 Now Thank We All Our God: Hymn of the Week Radio Show Episode

Reading of Now Thank We All Our God Lyrics

Who wondrous things hath done, In whom this world rejoices;

Who, from our mothers’ arms, Hath blessed us on our way

With countless gifts of love, And still is ours today.

O may this bounteous God, Through all our life be near us,

With ever joyful hearts And blessed peace to cheer us;

And keep us in his grace, And guide us when perplexed,

And free us from all ills In this world and the next.

All praise and thanks to God The Father now be given,

The Son, and him who reigns With them in highest heaven;

The one eternal God, Whom earth and heaven adore,

For thus it was, is now, And shall be evermore.

And now, let us hear a performance of this wonderful hymn by The Mormon Tabernacle Choir.

Now Thank We All Our God Background of the Hymn

The Thirty Years’ War, lasting from 1618 to 1648, was actually a series of wars over political and religious conflicts involving most of Europe with battlefronts concentrated in the German provinces of Silesia and Saxony.  Destruction of war accompanied by pillage, rape, injustice and lawlessness was almost unbearable to the citizens of Eilenburg, a walled city on the Mulde River near the modern city of Leipzig, Germany.

Overwhelmed by a large number of refugees, a shortage of food and housing and poor sanitation, disease and plague claimed more lives than war.  It was a time that tested the character and faith of even the strongest.

Martin Rinkart, a Lutheran minister educated at St. Thomas’ School in Leipzig, returned to his native Eilenburg in 1618, serving as pastor of one of the four Lutheran churches  located there for over thirty years until his death in 1649, a period encompassing the full duration of The Thirty Years’ War.  During one of the darkest periods of the war, plague claimed hundreds of victims per week in Eilenburg.  Soon, Rinkart was the only pastor remaining; the others having joined the thousands who died.

Amid scenes of destruction, death and dying, as carts carrying the bodies of the dead moved slowly through the streets of Eilenburg, Martin Rinkart was moved to write Nun danket alle Gott (Now Thank We All Our God), the first two stanzas as a prayer before meals with his family and the third as a personal statement of thanksgiving and faith in an all powerful God.

Written in 1636, it was first published about ten years later in Berlin with a tune of the same name in one of the most important hymnals of the seveenth century, Praxis Pietatis Melica, by Johann Crüger

Catherine Winkworth, nineteenth-century English scholar, translated the hymn into English and included it in her collection, Lyrica Germanica, published in 1858.  She brought German hymns to the attention of many with her excellent translations, and she was also an influential proponent of education for women.

And now we hear an arrangement of the tune, performed by organist Virgil Fox.

Rhythmic Symbolism of Now Thank We All Our God

The tune, Nun danket alle Gott (Now Thank We All Our God) is attributed to Johann Crüger, who included it together with Rinkart’s text of the same title in the second edition of his hymnal, Praxis Pietatis Melica, published in 1647.  Crüger was cantor for St. Nicholas Church, Berlin, for forty years, and he wrote and collected many tunes which he published in five collections to encourage better congregational singing.

He wrote solid melodies in strong metrical rhythm which are also easy to sing, enabling worshippers to sing of their faith, which was expressed in increasingly subjective terms as a result of the conflicts of the times, in contrast to the more objective statements of faith from the time of the Reformation, in the sixteenth century.

Crüger often named the tunes in his collections after the hymns with which they were paired.  Although, Nun danket alle Gott is similar in style to Crüger’s other tunes, Winkworth believed that Rinkart wrote both text and tune.  In any case, this hymn is a wonderful statement of faith that has stood the test of time, one that is widely sung throughout the world.  A great nineteenth-century composer, Felix Mendelssohn, harmonized this chorale in 1840, providing extra dimension to the sturdy tune.

In the radio show episode (scroll to top of page to play), you will hear two arrangements of our hymn—the first performed by the children’s choir Countdown Kids; the second, arranged by John Rutter, performed by the Cambridge Singers.

A spirit of thankfulness or a grateful heart is encouraged in Scripture, but it is a quality that seems to be as difficult to cultivate today as it must have been when Martin Rinkart wrote, Now Thank We All Our God.

Once a great business baron is reputed to have answered the question, “How much money is enough?” with the statement, “…One more dollar than I have.”  Expanding personal initiative brought about by great advances in science and medicine and increases in knowledge and in communications seem to insulate us from the idea of being grateful to an omnipotent God who provides sustenance for all our needs.  In contrast, many people in the world live in oppression, poverty, hunger and inadequate housing.

Perhaps their suffering is not far removed from that endured by the people of Eilenburg in the seventeenth century or from others throughout history.  Surely, their sturdy faith, affirmed in Now Thank We All Our God, is an example for us today.  And, not just an example—for we can sing it!

a spirit of thankfulness

Among Biblical references encouraging a spirit of thankfulness are this passage from Colossians 2: 6-7—As you therefore have received Christ Jesus the Lord, continue to live your lives in him, rooted and built up in him and established in the faith, just as you were taught, abounding in thanksgiving—and another from Philippians 4:4-7:

"Rejoice in the Lord always; again I will say, Rejoice. Let your gentleness be known to everyone.  The Lord is near.  Do not worry about anything, but in everything by prayer and supplication with thanksgiving let your requests be made known to God, and the peace of God, which surpasses all understanding, will guard your hearts and your minds in Christ Jesus."

And now, let us hear a beautiful arrangement of the tune, performed by organist James Parsons.