O for a Closer Walk with God – Introduction of the Hymn

Welcome to The Hymn of the Week. Imagine being an evangelical Christian in 18th-century England. Your leaders would be men such as John Wesley, founder of the Methodist Church. And, you might sing, “O For a Thousand Tongues to Sing,” one of over 6,500 hymns by Charles Wesley. Also, you could be in a crowd of 20,000, gathered outdoors to hear the compelling preaching of George Whitfield. Or, you might sing a new hymn by Isaac Watts, considered the father of English hymnody. His hymns reflect experiences common to all believers including, “Our God Our Help in Ages Past” and “When I Survey the Wondrous Cross.”

Other 18th-century authors of great hymns include Edward Perronet, who wrote “All Hail the Power of Jesus’ Name.” In addition, John Newton, loving pastor and advocate for ending the slave trade in England, wrote over 200 hymns. Among them, is the autobiographical “Amazing Grace.”

Imagine attending parties at the estate of Lady Huntington, who used her wealth and political influence to support the Evangelical Revival. Her guests regularly included those mentioned above and musical geniuses such as George Frideric Handel, composer of the great oratorio, “Messiah.”

It was an exhilarating time to be alive, unless you were tormented by an illness robbing you of much of the joy of life, then as now. I’m speaking of depression, a continual companion of 18th-century poet and hymn writer, William Cowper. His hymns include “There is a Fountain Filled with Blood” and God Moves in a Mysterious Way. In addition, he wrote “O for a Closer Walk with God,” The Hymn of the Week! 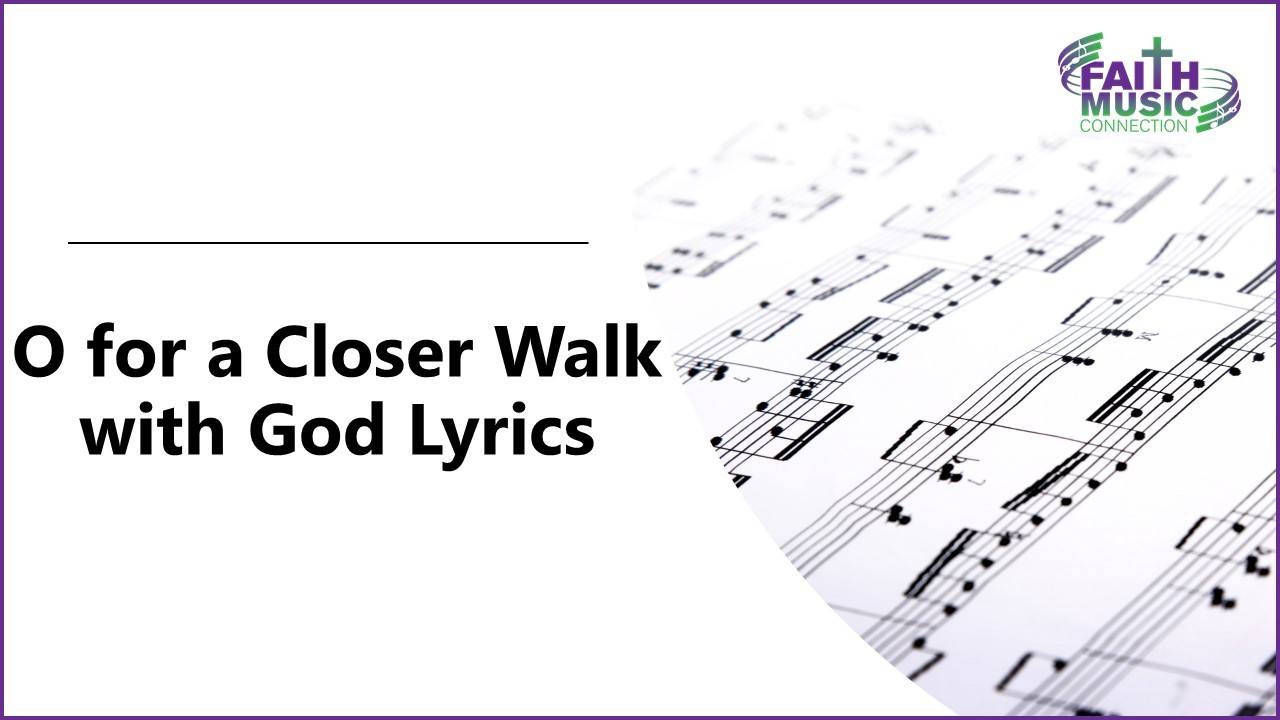 O for a Closer Walk with God: Hymn of the Week Radio Show Episode

Reading of O for a Closer

O for a closer walk with God,
A calm and heavenly frame,
A light to shine upon the road
That leads me to the Lamb!

Where is the blessedness I knew,
When first I saw the Lord?
Where is the soul refreshing view
Of Jesus, and His Word?

What peaceful hours I once enjoyed!
How sweet their memory still!
But they have left an aching void
The world can never fill.

Return, O holy Dove, return,
Sweet messenger of rest;
I hate the sins that made Thee mourn
And drove Thee from my breast.

The dearest idol I have known,
Whate’er that idol be
Help me to tear it from Thy throne,
And worship only Thee.

So shall my walk be close with God,
Calm and serene my frame;
So purer light shall mark the road
That leads me to the Lamb.

Background of O for a

William Cowper (pronounced Cooper) was born in November, 1731, near the town of Olney, Hertfordshire, England, near London. Before his birth, three older siblings died in infancy. Two of his younger siblings also died soon after birth; only young brother John survived. Thus, young William spent his early childhood years in a household where death was a frequent guest. In addition, the untimely death of his mother when he was only six years old had a profound impact on him. Years later, he wrote, “And, while the face renews my filial grief, fancy shall weave a charm for my relief.”

His father was one of the chaplains to King George II and Anglican rector of the church at Great Berkhampstead. He thought his young son had the potential to be a lawyer. In preparation, he sent him to Pitman’s Boarding School at New Bedfordshire and later, to the Westminster School, where he learned Greek, Latin and French.

It has been said that a boy of nervous temperament is always unhappy at school, and William suffered more than his share of bullying. But, he was a good student, excelling in his studies.

After graduation, he dabbled at the practice of law. For several years he courted his first cousin. After their engagement, his uncle forced the ending of the relationship. At the age of 21, Cowper suffered the first of many bouts of depression that crippled his adult life. Always a keen observer of his surroundings and his own feelings, depression often drove him to utter despair. These spells of deep depression often came upon him in the month of January. Because of this, he may have also suffered from what is today called seasonal affective disorder. This condition is marked by melancholia thought to be brought about by the relatively lesser daylight of winter days.

During these episodes, Cowper made several unsuccessful attempts to commit suicide. Once, he called for a driver and carriage, asking that he be driven immediately to the Thames River. He planned to drown himself, but a thick fog suddenly appeared such that the horse and driver were unable to locate the river. After an hour of futile attempts, the carriage ended back where it began—at Cowper’s doorstep. Perhaps, God’s grace was at work in the fog!

A chance meeting with John Newton, curate of the Anglican congregation at Olney, ultimately led to a deepening of his faith. Cowper expressed this in writing 68 hymns for a most important and influential evangelical hymnal, known as the “Olney Hymns.” Significantly this hymal brought evangelical hymns into services of the Church of England.

Newton, former captain of slave ships, had had a spiritual conversion which led him to renounce slavery. In addition, he actively campaigned for the ending the slave trade in England. As outgoing and persuasive as Cowper was sensitive and withdrawn, the two worked together effectively to end slavery in Great Britain. Their friendship lasted until Cowper’s death in 1800. However, neither the meaningful work of writing hymns and poetry nor his deep friendship with Newton could keep his depression from returning.

Cowper’s personal faith was Calvinistic—he believed that “once saved, always saved.” However, when stricken with severe depression, he wrote that he himself was the one exception to this tenet that God had created.

One evening, he made his way to the Thames with the intention of jumping off the dock into the cold river. Because the dock was not deserted as he expected, he decided not to jump because he feared he might be rescued.

On another occasion, he procured some laudanum, but upon returning home his hands closed into a fist. Thus, he was unable to open his fingers to prepare a fatal dose. Next, he tried to fall on his pen-knife, but instead of penetrating his heart he succeeded only in breaking the blade. Then, totally frustrated and in despair, he finally succeeded, after three unsuccessful attempts, to hang himself with a garter which he suspended from a door. He lost consciousness, but his housekeeper found him alive the next morning. The garter had broken before asphyxiation was complete!

How sad that one so gifted suffered such anguish with depression, a mental illness that today can be controlled with pharmaceuticals. However, many continue to suffer because they do not seek treatment, heaping misery upon themselves and those that love them, much as did Cowper.

And now, we hear our hymn, “O for a Closer Walk with God, performed by Michael Vignoles.

The tune, “Caithness” first appeared in a 1635 edition of “The Scottish Psalter. It is one of several common-meter tunes often paired with “O for a Closer Walk with God.” Anemic singing of the Psalms in England was one of the driving forces in the development of the evangelical hymn. Ironically, many hymn editors continue to pair this Psalm tune with our evangelical hymn. Tellingly, this irony highlights a principal task of hymnal selection committees and editors. Namely, find the best, most effective pairing of hymn and tune for the edification of those who will sing and play it.

The meter of “O for a Closer Walk with God” is 8.6.8.6., four lines of verse in alternating patterns of eight and six syllables. This pattern is designated “common meter,” abbreviated “C.M.” Potentially, any hymn may be paired with any tune in the same meter.

The wonder is how beautifully so many of these combinations from different times work together. Perhaps, there is indeed a connection throughout all generations of the witness of people of faith!

Perhaps it is William Cowper who best expresses the mystery of the power and connection of hymns to people of faith throughout 2,000 years of Christian experience in the following hymn.

God moves in a mysterious way
His wonders to perform;
He plants His footsteps in the sea
And rides upon the storm.

Deep in unfathomable mines
Of never-failing skill
He treasures up His bright designs
And works His sovereign will.

Ye fearful saints, fresh courage take;
The clouds ye so much dread
Are big with mercy and shall break
In blessings on your head.

Judge not the Lord by feeble sense,
But trust Him for His grace;
Behind a frowning providence
He hides a smiling face.

His purposes will ripen fast,
Unfolding every hour;
The bud may have a bitter taste,
But sweet will be the flower.

Blind unbelief is sure to err
And scan His work in vain;
God is His own interpreter,
And He will make it plain.

And now, let us hear a beautiful medley of two other common-meter hymns, which could also be paired with our hymn. In addition, the ethereal 19th-century American hymn, “What Wondrous Love is This?” is included. This performance is by the National Philharmonic Orchestra of London and the London Philharmonic Choir.