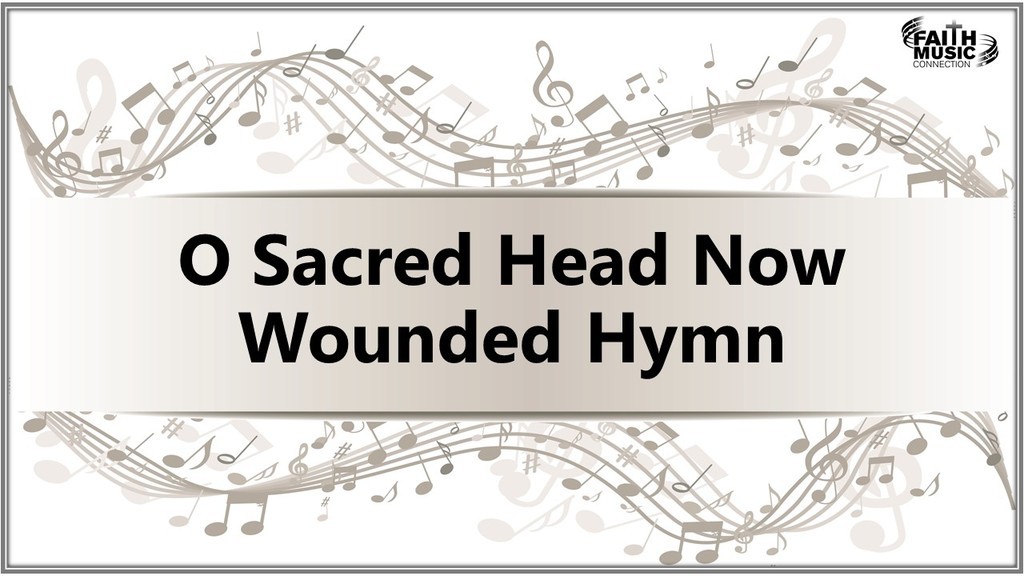 Welcome to The Hymn of the Week. Every year, Christians throughout the world celebrate two major events: Christmas, the incarnation of God in the birth of Jesus; and Easter, the resurrection of Jesus
Christ in ultimate victory over sin and death. A season of contemplation, repentance and preparation, symbolized by the color purple, precede these celebrations.

This week we will consider a hymn attributed to a 12th-century French cleric and saint, Bernard of Clairvaux. 17th-century scholars translated it from Latin to German, and English scholars translated it into English in the 18th-century. For over 350 years editors have paired this hymn with a tune originally composed for an early 17th-century love song. Master composer J. S. Bach (1685-1750) harmonized this tune. Perhaps surprisingly, Bach made repeated use of it in both his "St. Matthew Passion" and in his "Christmas Oratorio," (with two different hymn texts). Thus, he connecting it to celebration or preparation for Christmas and Easter. This hymn, “O Sacred Head Now Wounded” is— “The Hymn of the Week!” 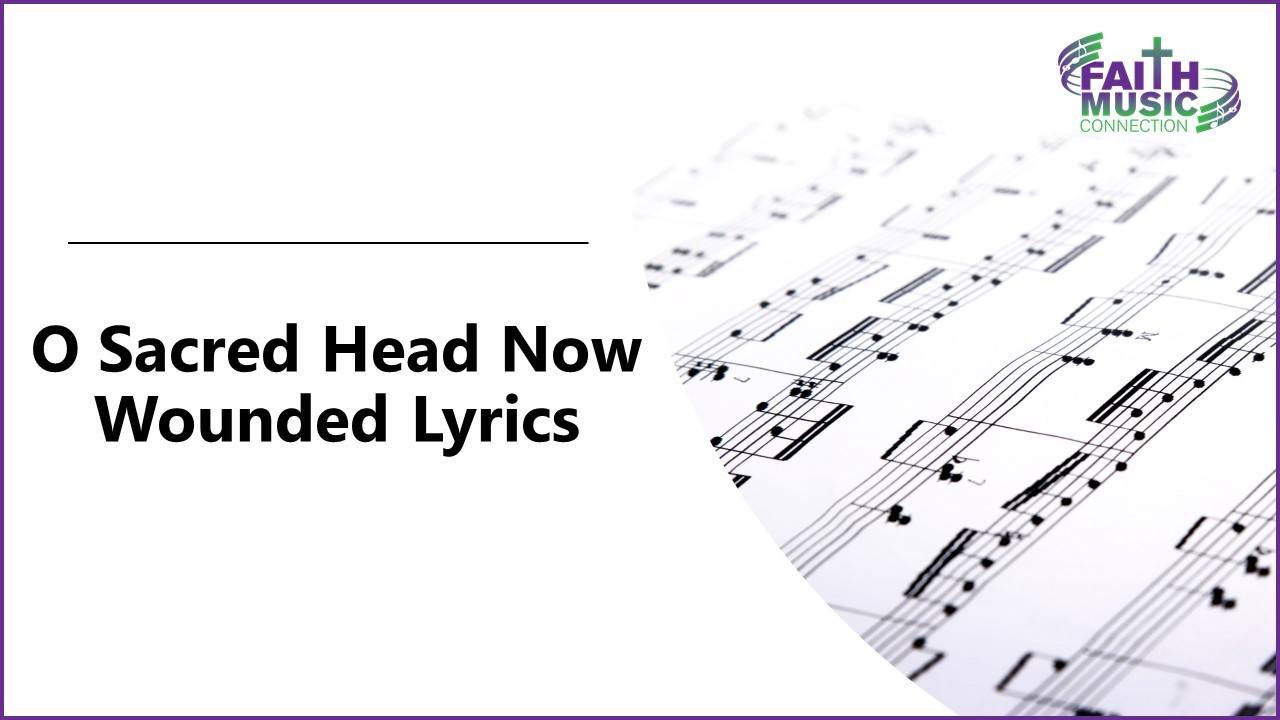 O sacred Head, now wounded, with grief and shame weighed down,
Now scornfully surrounded with thorns, Thine only crown;
O Sacred Head, what glory, what bliss till now was Thine!
Yet, though despised and gory, I joy to call Thee mine.

What Thou, my Lord, hast suffered, was all for sinners’ gain;
Mine, mine was the transgression, but Thine the deadly pain.
Lo, her I fall, my Savior! ‘Tis I deserve Thy place;
Look on me with Thy favor, vouchsafe to me Thy grace.

Men mock and taunt and jeer Thee, Thou noble countenance,
Though mighty worlds shall fear Thee and flee before Thy glance.
How art thou pale with anguish, with sore abuse and scorn!
How doth Thy visage languish that once was bright as morn!

Now from Thy cheeks has vanished their color once so fair;
From Thy red lips is banished the splendor that was there.
Grim death, with cruel rigor, hath robbed Thee of Thy life;
Thus, Thou hast lost Thy vigor, Thy strength in this sad strife.

My burden in Thy passion, Lord, Thou has borne for me,
For it was my transgression which brought this woe on Thee.
I cast me down before Thee; wrath were my rightful lot;
Have mercy, I implore Thee; Redeemer, spurn me not!

What language shall I borrow to thank Thee, dearest friend,
For this Thy dying sorrow, Thy pity without end?
O make me Thine forever, and should I fainting be,
Lord, let me never, never outlive my love to Thee.

My Shepherd, now receive me; my Guardian, own me Thine.
Great blessings Thou didst give me, O source of gifts divine.
Thy lips have often fed me with words of truth and love;
Thy spirit oft hath led me to heavenly joys above.

Here, I will stand beside Thee, from Thee I will not part;
O Savior, do not chide me! When breaks Thy loving heart,
When soul and body languish in death’s cold, cruel grasp,
Then, in Thy deepest anguish, Thee in mine arms I’ll clasp.

The joy can never by spoken, above all joys beside,
When in Thy body broken, I thus with safety hide.
O Lord of Life, desiring Thy glory now to see,
Beside Thy cross expiring, I’d breathe my soul to Thee.

My savior, be Thou near me when death is at my door;
Then let Thy presence cheer me, forsake me nevermore!
When soul and body languish, oh, leave me not alone,
But take away mine anguish by virtue of Thine own!

Be Thou my consolation, my shield when I must die;
Remind me of Thy passion when my last hour draws nigh.
Mine eyes shall then behold Thee, upon Thy cross shall dwell,
My heart by faith enfolds Thee, Who dieth thus dies well.

Both Catholic and non-Catholic hymn scholars attribute “O Sacred Head, Now Wounded” to St. Bernard of Clairvaux. He was one of the most influential leaders, ecclesiastical and secular, of the 12th century. The original poem consisted of seven sections of verse. Each section was a meditation on a particular part of Christ’s body – feet, knees, hands, sides, breast, heart and face.

Born about 1090 to French parents of noble blood, Bernard was an outstanding student at Chatillon. There, he was much devoted to his studies and to mystic meditation. The death of his mother in 1105 had a profound effect on him. Consequently, he revoked the advantages his noble birth, intelligence, charisma and physical skills provided him in the secular world. Instead, he embraced the ascetic life of a monk, marked by devotion, hard physical work and contemplation and prayer.

In 1113 Bernard entered a nearby monastery at Citeaux, the first formed by a group of Benedictine monks. Their goal was to reform the laxity of devotion then present within the order. Two years later Bernard was appointed to lead a group of monks in establishing new monasteries for the reformers. They became known as Cistercians after the geographic area from which their movement sprang. Bernard’s ardor and resourcefulness were instrumental in the growth of the Cistercian order and to subsequent recognition by the pope in Rome.

Bernard’s leadership skills seem almost legendary. In 1130 following the death of Pope Honorius II, the College of Cardinals could not come to an agreement on a new pope. They split into two factions, each electing a different candidate to become the Holy See. A period of ecclesiastical and political uncertainty followed.

Bernard’s influence was great. French King Louis VI and the French bishops, King Henry I of England and German emperor Lothar agreed to support his decision on the question of the rightful pope. Bernard supported Innocent II. Following the death of an anti-pope and the resignation of his successor, all factions recognized Innocent II as pope in 1139.

Bernard returned to Citeaux after four years of service to the pope in Rome. He continued to make trips to the Vatican to exert his influence in ecclesiastical matters. Charged to raise an army of crusaders to Palestine, he recruited the king of France and the emperor of Germany and huge numbers of people of all classes. Of the thousands who embarked in 1147 only a small fraction made it to the Holy Land, and Bernard was blamed for the failure of the crusade, which ended in a disgraceful defeat that weighed heavily on him. He died a few years later in 1153.

The Best Monk that Ever Lived

In addition to his heroic accomplishments outside the monastery, Bernard was also a contemplative man of prayer. He produced several long poetic and theological works on the nature, the life and the passion of Jesus Christ. Almost four centuries later, Martin Luther, himself a monk and leader of the Reformation, wrote this of St. Bernard. He was “The best monk that ever lived, whom I admire beyond all the rest put together.”

From Latin to German

American Presbyterian pastor and Princeton Theological Seminary professor of church history James Waddell Alexander (1804-1859) translated Bernard’s hymn  into English. Alexander's translations of Latin and German hymns appeared in an 1861 posthumous collection entitled “The Breaking Crucible and Other Translations.” Since then, "O Sacred Head Now Wounded" has been widely used in English hymnals throughout the world.

Following the Reformation, the use of chorales proved to be an effective means of developing evangelical congregational singing. This was particularly true in Lutheran churches in what is now Germany. A chorale was a popular melody often set to secular lyrics. Martin Luther and other hymn writers and composers converted (no pun intended) them for use with hymns. These chorales typically were sturdy melodies of limited range. Thus, they were comparatively easy to sing by untrained, amateur voices typical of most congregations, then, as now.

Hans Leo Hassler (1564-1612) composed “Passion Chorale” for a popular love song. The title in English translation is “My Heart is Distracted by a Gentle Maid.” Hassler, born in Nuremberg, studied with Andrea Gabrielli in Venice. He became perhaps the most prominent organist and composer following his return to Germany until his death in 1612.

Many scholars consider J. S. Bach (1685-1750) the greatest composer in the history of western music. A devout Lutheran, Bach used “Passion Chorale” repeatedly throughout his great oratorio, the “St. Matthew Passion.” This chorale was the basis for the listener’s reflection and participation.

Bach used it for similar purpose in his “Christmas Oratorio” as well. He also used it for thematic material in several of his sacred cantatas and in an organ prelude. Bach’s several four-part harmonizations of this chorale are utilized in many hymnals. 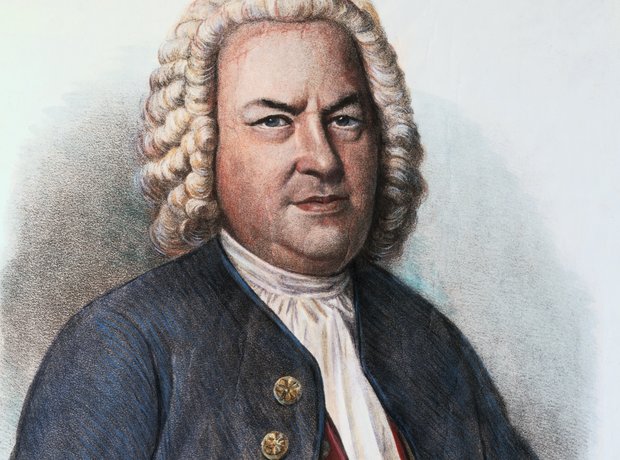 Christians continue to meditate on the passion, crucifixion, death and resurrection of Jesus Christ. His death was not a gentle, peaceful passing, but a horrible, cruel, lingering and excruciatingly painful one. He died for the reconciliation of all to God as proclaimed in the following verses.

“For to this you have been called, because Christ also suffered for you, leaving you an example, so that you should follow in his steps. ‘He committed no sin, and no deceit was found in his mouth.’ When he was abused, he did not return abuse, when he suffered, he did not threaten; but he entrusted himself to the one who judges justly.

He himself bore our sins in his body on the cross, so that, free from sins, we might live for righteousness; by his wounds you have been healed. For you were going astray like sheep, but now you have returned to the shepherd and guardian of your souls.” Amen.