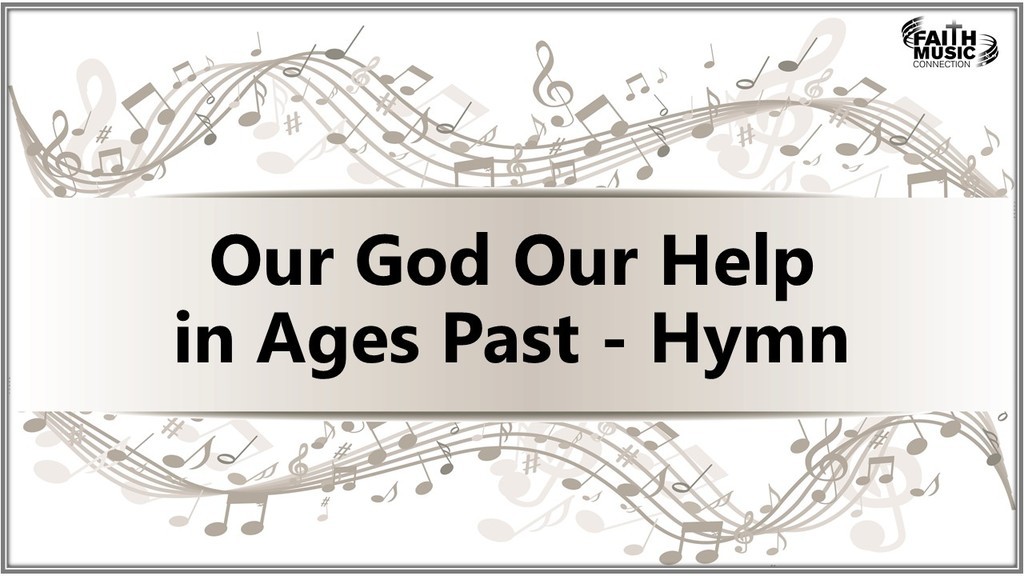 Our God Our Help in Ages Past – Introduction of the Hymn

Welcome to “The Hymn of the Week.” At the turn of the 18th century, hymn singing by English-speaking Christians was in a dismal state. For example, Congregational singing was limited to translations of the Old Testament Book of Psalms. Though the Psalms are indeed the “hymnbook” of the Bible, English translations of the day were often lacking.

In the preface of his 1719 work about Psalm singing in worship, Isaac Watts writes as follows.

“An Enquiry into the Right Way of Fitting the Book of Psalms for Christian Worship. (Though) The Psalms of David are a work of admirable and divine composure. (though) They contain the noblest sentiments of piety and breathe a most exalted spirit of devotion. Yet, when the best of Christians attempts to sing many of them in our common translations, that spirit of devotion vanishes and is lost. The Psalm dies upon their lips, and they feel scarce anything of the holy pleasure.

Honorable Service to the Church of Christ

If this attempt of mine…introduce(s) warm devotion in this part of divine worship, I shall esteem it an honorable service done to the Church of Christ.”

And, what an honorable service it has proven to be. Almost 400 years later, Christians everywhere continue to sing hundreds of Isaac Watts’ hymns and Psalm translations. Fittingly, one of them, “Our God Our Help in Ages Past” is —"The Hymn of the Week!”

Click Below for Our God Our Help in Ages Past Lyrics 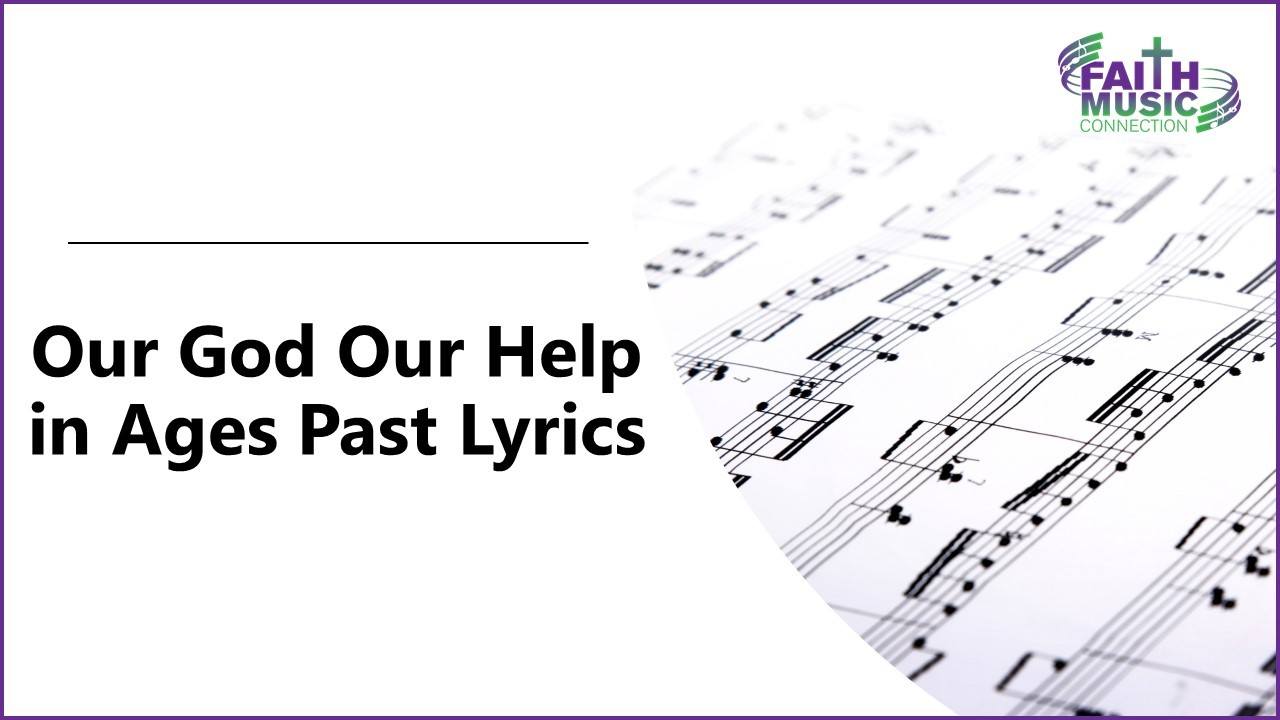 Our God Our Help in Ages Past: Hymn of the Week Radio Episode

Reading of Our God Our Help in Ages Past Lyrics

Our God, our help in ages past, Our
Hope for years to come,
Our shelter from the stormy blast,
And our eternal home.

Under the shadow of Thy throne
Thy saints have dwelt secure;
Sufficient is Thine arm alone,
And our defense is sure.

Before the hills in order stood,
Or earth received her frame,
From everlasting Thou art God,
To endless years the same.

Thy Word commands our flesh to dust,
Return, ye sons of men:
All nations rose from earth at first,
And turn to earth again.

A thousand ages in Thy sight
Are like an evening gone;
Short as the watch that ends the night
Before the rising sun.

The busy tribes of flesh and blood,
With all their lives and cares,
Are carried downwards by the flood,
And lost in following years.

Time, like an ever-rolling stream,
Bears all its sons away;
They fly, forgotten, as a dream
Dies at the opening day.

Like flowery fields the nations stand
Pleased with the morning light;
The flowers beneath the mower’s hand
Lie withering ere ‘tis night.

Our God, our help in ages past,
Our hope for years to come,
Be Thou our guard while troubles last,
And our eternal home.

And now, let us hear our hymn, paired with the tune, St. Anne, performed by the choir of Westminster Abbey, with organist Martin Baker, conducted by Martin Neary.

Background of Our God Our Help in Ages Past

Isaac Watts, author of “Our God Our Help in Ages Past,” is universally known as the “Father of English Hymnody.” He was born in Southampton, England, in 1674, to devout Calvinistic parents, who were often persecuted for their “non-conformist” beliefs. At a very early age he showed a propensity for books and poetry. By the age of thirteen he had learned Latin, Greek, French and Hebrew.

Several prominent local citizens offered to finance a university education for him. Instead, he enrolled in the non-conformist academy of Thomas Rowe at Stoke Newington on the outskirts of London.

After leaving the academy, Watts served a assistant pastor of the Mark Lane Independent Chapel, London. He became pastor in 1702, a position he retained for the rest of his life.

In 1712, Sir Thomas Abney invited the seriously ill Watts to live at his estate at Hertfordshire. Though he recovered, his health remained frail. He continued to live with the Abneys, tutoring their children and writing sermons, hymns and many books. Oxford University used one of Watts’ books, “Logic,” as a textbook for many years.

Isaac Watts died in 1748, at the age of 74. Though only five feet tall, he was a well-loved giant of a man. Fittingly, his country honored him after his death with a statue in the Poets’ Corner of Westminster Abbey.

Isaac Watts wrote most of his 600 hymns before he reached the age of 30. In contrast to the half-hearted Psalm-singing characteristic of the times, Watts wrote “hymns of human composure.” They were often in the first person, expressing the language of the New Testament. This allowed Christians, then and now, to sing of their personal faith and experience.

Among his hymns are many new paraphrases of the Psalms, including “Joy to the World” (Psalm 98.) Also, “Jesus Shall Reign Where ere the Sun (Psalm 72) and “O God, Our Help in Ages Past” (Psalm 90). Watts also wrote many hymns still widely sung today. These include, “I Sing the Mighty Power of God,” “Come Holy Spirit Heavenly Dove,” “Am I a Soldier of the Cross,” “Alas and Did my Savior Bleed,” “When I Survey the Wondrous Cross” and many others.

Watts also enjoyed working with children. His “Divine and Moral Songs for Children,” published in 1715, is still popular today.

"Our God Our Help in Ages Past" first appeared in 1719 in a collection restating the Psalms in New Testament, Christian language. The first two words sometimes appear as “O God” as used in a later hymn collection by John Wesley. However, Watts’ original “Our God” is in keeping with English biblical translations of Psalm 90, on which our hymn is based. For example, from the King James Version to The New Revised Standard, “our” is used in verse one.

The original nine stanzas are replete with beautiful use of simile and metaphor. For example, in stanza seven: “Time, like an ever-rolling stream bears all its sons away. They fly, forgotten, as a dream dies at the opening day.” Thus, Watts stanzas provide a strikingly vivid exegesis of the first five verses of Psalm 90 that is both memorable and lyric.

And now, let us hear our hymn as sung by the Choir of King’s College, Cambridge, Steven Cleobury, conductor.

William Croft, notable English Baroque composer, composed “St. Anne,” the tune now almost universally paired with “Our God Our Help in Ages Past.” It first appeared in 1708, in the sixth edition of “A Supplement to the New Version of Psalms by Dr. Brady and Mr. Tate.” The tune was named, “St. Anne,” after St. Anne’s church, Soho, London, where Croft was organist.

Child of the Chapel Royal

Born in 1678 into a wealthy, aristocratic family in Warwickshire, England, William Croft demonstrated keen musical talent at an early age. John Blow, noted composer and organist at Westminster Abbey, taught him as a “Child of the Chapel Royal." By age 22, Croft published many secular compositions. These included songs, instrumental music for violin and harpsichord as well as instrumental music for the theater. However, he is most noted, today, for his achievements in the field of sacred music.

Croft served St. Anne’s Church as organist from 1700 to 1708. Upon the death of John Blow, he succeeded his teacher and mentor as organist of Westminster Abbey. He retained this most prestigious position until his death in 1727 at the age of 48.

In 1714, Croft composed music for the burial service of Queen Anne and for the coronation of her successor, George I. In 1724, Croft published a two-volume collection of church music, entitled, “Musica Sacra,” (“Sacred Music”). This collection contained the burial service and 31 anthems, the first music published in printed, music-score format. Significantly, Croft’s music has been used for every British state funeral since that time. A recent example was the service of Queen Elizabeth, the Queen Mother, in 2002.

In addition to his achievements as a composer and church musician, William Croft lived an exemplary life. A noted, 18th-century music historian comments as follows. “William Croft has gone through life in one even tenor of professional activity and propriety of conduct. We hear of no illiberal traits of envy, malevolence, or insolence…The universal respect he obtained from his talents and eminence in the profession seems to have blended with personal affection.”

Croft’s tune, “St. Anne,” is the most performed of all his compositions. Originally composed for a setting of Psalm 42, this common-meter tune was used by Handel in his sixth Chandos anthem, “O Praise the Lord.” In “addition, Johann Sebastian Bach used it in his fugue in e-flat, known throughout the English-speaking world as the “St. Anne Fugue.” As a hymn tune, “St. Anne” progresses rapidly from melody note to melody note in quarter-note values. Fittingly, this satisfied one of Watts’ ideals that a tune should closely mirror the rhythm of speech.

And now, let us hear the tune, “St. Anne,” performed by the Grimethorpe Colliery Band, in a 1968 recording, conducted by George Thompson.

Psalm 90 is the opening psalm of book IV of the Old Testament book of Psalms. The New Revised Standard Version of the original Hebrew text begins as follows. “Lord, you have been our dwelling place in all generations. Before the mountains were brought forth, or ever you had formed the earth and the world, from everlasting to everlasting you are God.”

These words are a beautiful statement of faith. Although the original Hebrew text was intended to be sung, this literal English translation does not easily lend itself to singing. Now, consider Isaac Watts’ version of the same text in “the language of the New Testament suitable for Christian worship.”

“Our God, our help in ages past,
Our hope for years to come,
A shelter from the stormy blast
And our eternal home.

Before the hills in order stood,
Or earth received her frame,
From everlasting Thou are God,
To endless years, the same.”

Thus, Watts gives us not only another beautiful statement of faith, but also, the wonderful bonus of a lyric version that can resonate in our hearts on wings of song. In addition, Watts’ version is in keeping with the nature of the original verses written in ancient Hebrew.

And now, let us hear our hymn, sung by the Cambridge Singers, arranged and conducted by John Rutter.