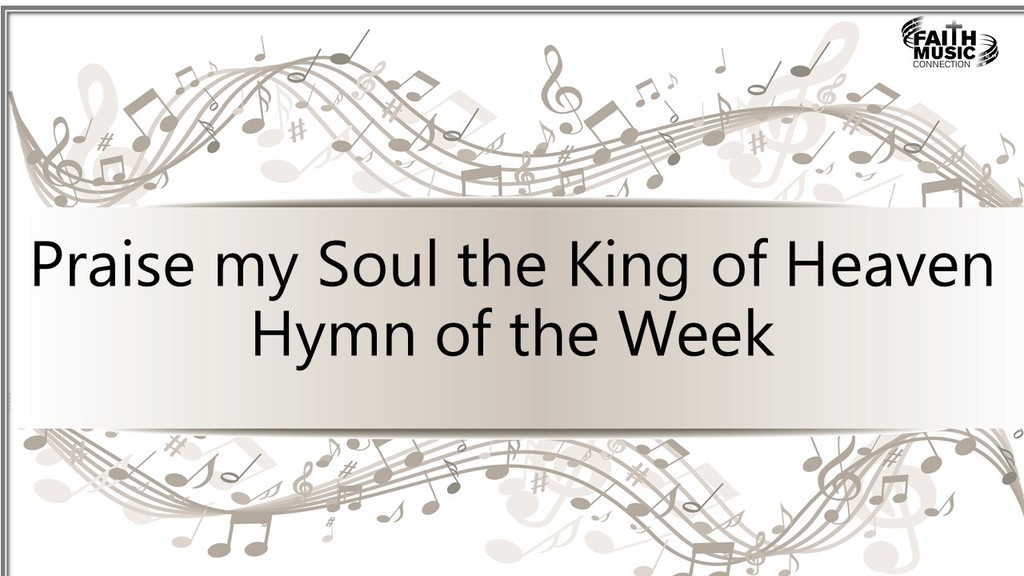 Praise my Soul the King of Heaven Introduction of The Hymn

Welcome to The Hymn of the Week. A Hymn is usually the product of the work of two Christian artists—a poet who is inspired to write the hymn and a composer who sets the metrical verses to music. The week we will consider a hymn by the pastor of a small, rural Church of England congregation paired with a tune by one of the most influential, nineteenth-century English composers, who spent his entire career in London, knighted by Queen Victoria and honored by the great university at Cambridge. The resulting hymn continues to be a favorite of British royalty and of Christians throughout the world. Praise my Soul, the King of Heaven—The Hymn of the Week!

Click Below for Praise my Soul the King of Heaven Lyrics 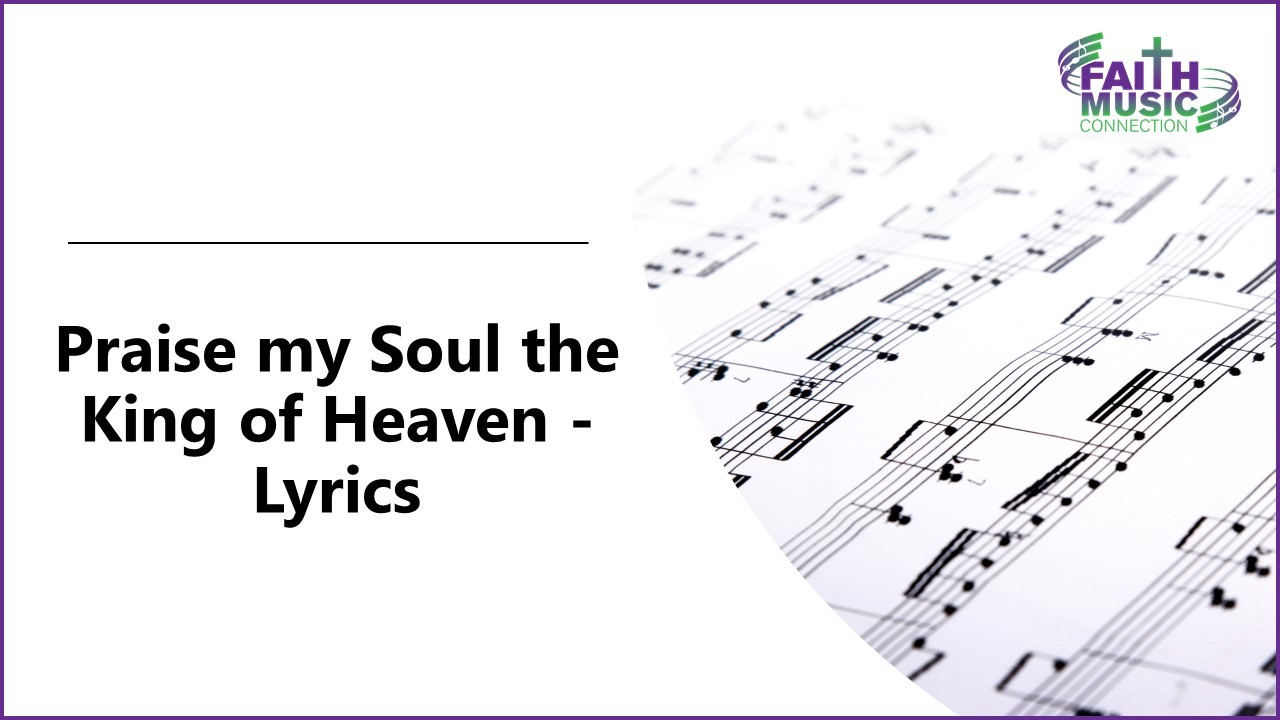 Praise my Soul the King of Heaven: Hymn of the Week Radio Show Episode

Reading of Praise My Soul the King of Heaven Lyrics

Praise Him for His grace and favor
To our fathers in distress.
Praise Him still the same as ever,
Slow to chide, and swift to bless.
Alleluia! Alleluia!
Glorious in His faithfulness.

Fatherlike He tends and spares us;
Well our feeble frame He knows.
In His hands He gently bears us,
Rescues us from all our foes.
Alleluia! Alleluia!
Widely yet His mercy flows.

Frail as summer’s flower we flourish,
Blows the wind and it is gone;
But while mortals rise and perish
Our God lives unchanging on,
Praise Him, Praise Him, Hallelujah
Praise the High Eternal One!

Angels help us to adore Him;
Ye behold Him face to face;
Sun and moon, bow down before Him,
Dwellers all in time and space.
Alleluia! Alleluia!
Praise with us the God of grace.

And now, let us hear our hymn, paired with the tune, Lauda anima, performed by the choir of King’s College, Cambridge, directed by Stephen Cleobury

Background of Praise my Soul the King of Heaven

Henry Francis Lyte was born in Scotland in 1793 and spent most of his childhood in an orphanage. He had a keen intellect, attending Trinity College in Dublin, Ireland, with the intent of becoming a physician. However, his scholarly interest in theology and English Poetry together with his strong personal faith led to his ordination as an Anglican minister in 1815.

He was appointed pastor of All Saints Church of Lower Brixham, Devonshire, in 1824, serving there for thirty years until weeks before his death from tuberculosis in 1847. The scholarly, poetic Henry Lyte, of fragile health and bothered by asthma, was a kind and compassionate man, an excellent and beloved pastor who gave himself wholeheartedly in service to the simple folk of the small fishing community.

He found time to write two books of religious poetry and dozens of hymns, the two most famous being Praise My Soul, the King of Heaven, based on Psalm103, and Abide With Me, which he completed just three weeks before his death. Queen Elizabeth II honored Henry Francis Lyte when she included the singing of these two hymns in her royal wedding on November 20, 1947, exactly 100 years after his death.

And now, let us hear a beautiful performance of lauda anima, the tune most commonly paired with our hymn, by the Grimethorpe Colliery Band.

Background of the Tune: Lauda Anima

John Goss, composer of lauda anima, the tune so often paired with Praise my Soul, the King of Heaven, was one of the most important and influential English musicians of the nineteenth-century. He was noted as a teacher, composer, organist, writer and critic.

Goss was born on December 27, 1800, just five days from the turn of a new century, which became known as the age of Romanticism in music. His musical career began at the age of ten when he was named a chorister of the Chapel Royal. Five years later he began study of composition and organ with Thomas Attwood, noted composer and organist of St. Paul’s Cathedral, the largest church in England.

In 1824, Goss moved a few miles west to become the first organist to oversee the choirs of St. Luke’s, Chelsea, after dedication of a new sanctuary and large pipe organ. Ironically, he succeeded Henry Lyte, who in addition to his priestly duties, sometimes filled in as an organist there, before his appointment as curate in Lower Brixham. Goss remained at St. Luke’s, Chelsea, until 1838.

Organist and Director of Choirs at St. Paul's Cathedral

Following the death of his teacher Attwood, he returned to St. Paul’s Cathedral to take over the position of organist and director of choirs. There, he wrote many of his anthems and hymns during twenty-four years of service. Concurrent with his church posts, he served as Professor of Harmony at the Royal Academy of Music for 47 years. He was appointed composer to the Chapel Royal in 1856 in recognition of his achievements as a composer.

In 1872 he was knighted by Queen Victoria, and four years later was awarded an honorary Doctor of Music degree by Cambridge University. Among his church music compositions are settings of Psalms 89, 91, 127 and 128, the anthems, “O Taste and See” and “O Savior of the World,” and the beautiful tune he composed for our hymn, for which he is, perhaps, best known. Following his death at Brixton, London, on May 10, 1880, he was buried in St. Paul’s Cathedral.

And now we hear Lauda anima, as arranged and performed by organist Timothy Albrecht followed by our hymn as sung by the choir of St. Paul’s Cathedral.

Devotion or Scripture Related Praise my Soul the King of Heaven

Henry Francis Lyte’s poem, “Ere the Night Fall,” gives insight into his life and ministry and states his dying wish as follows.

“Why do I sigh to find life’s evening shadows gathering round my way, the keen eye dimming and the buoyant mind unhinging day by day? I want not vulgar fame—I seek not to survive in brass and stone! Hearts may not kindle when they hear my name, nor tear my value own: but might I leave behind some blessing for my fellows, some fair trust to guide, to cheer, to elevate my kind when I am in the dust; might verse of mine inspire one virtuous aim, one high resolve impart, light in one drooping soul a hallowed fire, or bind one broken heart; death would be sweeter then, more calm my slumber ‘neath the silent sod—might I thus live to bless my fellow-men, or glorify my God!

O thou whose touch can lend life to the dead, thy quickening grace supply, and grant me, swanlike, my last breath to spend in song that may not die!"

This dying wish is indeed fulfilled in Praise my Soul, the King of Heaven, which so moved future Queen Elizabeth II in 1947. And, over one-hundred seventy years after his death, this majestic hymn continues to bless us. May this, his song, never die!

And now, let us hear this great hymn as sung by the York Minster Choir with Barry Rose and Christopher Dearly.