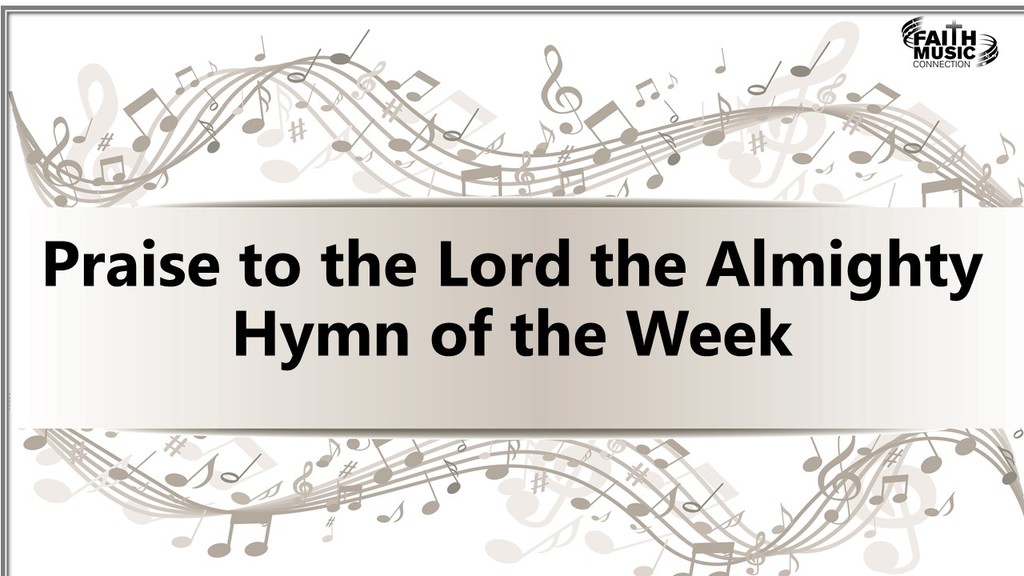 ​Praise to the Lord the Almighty - Introduction of the Hymn

Welcome to The Hymn of the Week. The modern German city of Düsseldorf gets its name from a nearby small stream, just a few feet wide. Its entire length is only 50 miles from its source to where it once flowed into the great Rhein River. Until the middle of the 18th century, this stream meandered through a deep, 60-foot gorge. Numerous waterfalls, cliffs and caves marked the rugged landscape.

Neander and the Neanderthal Man

From 1674-1679, this area was a refuge for Joachim Neander, a popular and controversial young poet, musician and teacher. Neander's association with the area was so great that it became known as the Neanderthal or Neander Valley. In 1856, the bones of the Neanderthal Man were discovered in this valley. This discovery further memorializes the surname of this great hymn writer and composer. His widely popular, Praise to the Lord the Almighty, is this week’s, The Hymn of the Week.

Click Below for Praise to the Lord the Almighty Lyrics 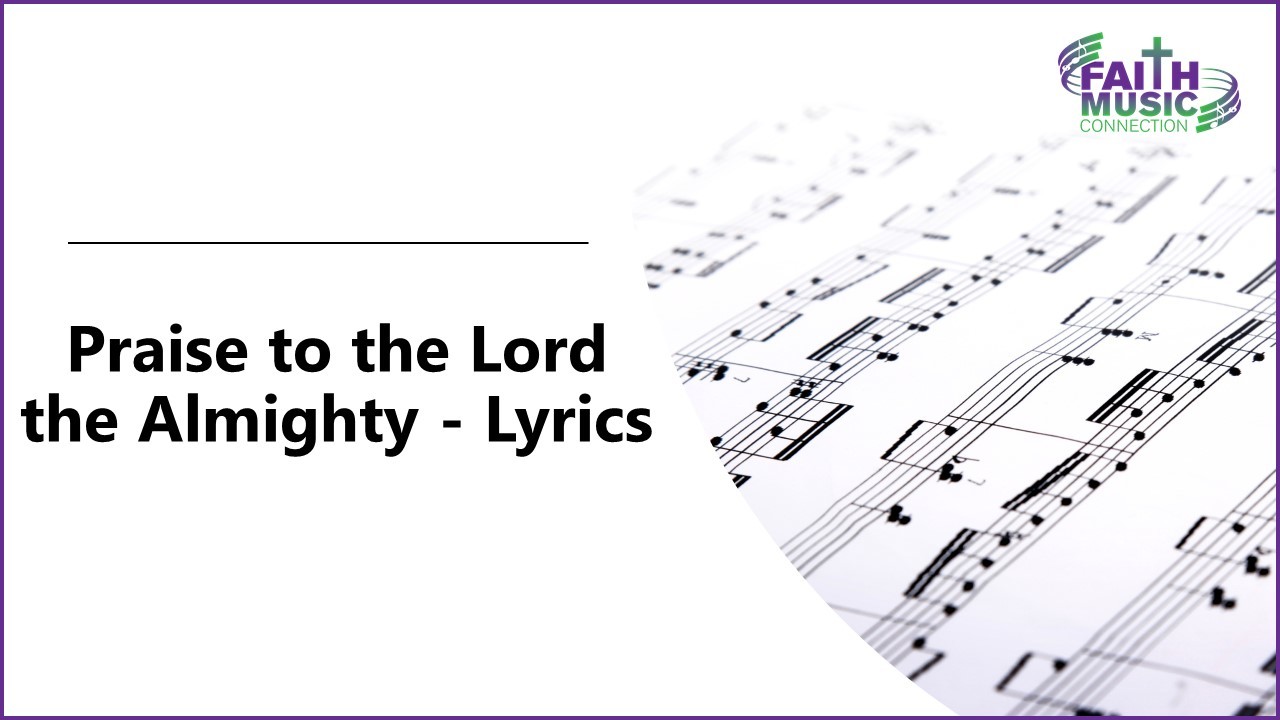 Praise to the Lord the Almighty: Hymn of the Week Radio Show Episode

Reading of Praise to the Lord the Almighty Lyrics

Praise to the Lord, the Almighty, the King of creation!
O my soul, praise Him, for He is thy health and salvation!
All ye who hear, now to His temple draw near;
Praise Him in glad adoration.

Praise to the Lord, who over all things so wondrously reigneth,
Shelters thee under His wings, yea, so gently sustaineth!
Hast thou not seen how thy desires ever have been
Granted in what He ordaineth?

Praise to the Lord, who hath fearfully, wondrously, made thee;
Health hath vouchsafed and, when heedlessly falling, hath stayed thee.
What need or grief ever hath failed of relief?
Wings of His mercy did shade thee.

Praise to the Lord, who doth prosper thy work and defend thee;
Surely His goodness and mercy here daily attend thee.
Ponder anew what the Almighty can do,
If with His love He befriend thee.

Praise to the Lord, who, when tempests their warfare are waging,
Who, when the elements madly around thee are raging,
Biddeth them cease, turneth their fury to peace,
Whirlwinds and waters assuaging.

Praise to the Lord, who, when darkness of sin is abounding,
Who, when the godless do triumph, all virtue confounding,
Sheddeth His light, chaseth the horrors of night,
Saints with His mercy surrounding.

Praise to the Lord, O let all that is in me adore Him!
All that hath life and breath, come now with praises before Him.
Let the Amen sound from His people again,
Gladly for aye we adore Him.

And now, let us hear this wonderful hymn, performed by the choir of King’s College, Cambridge, conducted by Stephen Cleobury

Background of Praise to the Lord the Almighty

Joachim Neander was born in Bremen, Germany, in 1650, the son of a teacher. The family name was Neumann until his musician grandfather, following a popular custom of the times, changed it to its Greek equivalent, Neander. Both Neumann and Neander  literally mean, “new man.”

After studying theology at the University of Bremen from 1666-70, Joachim Neander continued his studies at Heildelberg and Frankfort. Subsequently, he became a committed Calvinist. He moved to Düsseldorf in 1674 and accepted a position at the Lateinschule (grammar school). There, he served as both principal and teacher until 1679.

Joachim Neander greatly enjoyed roaming the rugged terrain of the deep gorge through which the Düssel brook flowed. He often read his poems and sang his musical compositions during pilgrimages to the numerous caves and grottos. In addition to these personal pilgrimages, he also taught and preached to groups which he led on spiritual retreats. His well-known affinity for the area led to its becoming known as the Neanderthal, the German term for Neander Valley.

The 30-years War ended shortly before his birth. Religious conflict among Catholics, and Protestants, while no longer marked by bloodshed, continued as divisive as the Neanderthal was rugged. References to this conflict of belief are apparent in Praise to the Lord, the Almighty, the King of Creation, stanzas 5 & 6. Most hymnals omit these stanzas along with stanza 3, and thus include only four of Neander’s original seven stanzas. Note that the word "aye" in the last line of stanza 7 means ever, always or continually. It is properly pronounced “aye,” not "eye." This avoids confusion with its homonym, which is spelled the same but means “yea” or “yes.”

This great hymn, based on Psalms 150 and 103, verses 1-6, is probably the most popular and widely sung of the many hymns written by Neander. It was written in the last year of his life, at the age of 30, shortly before he died of tuberculosis.

Catherine Winkworth, 19th-century English scholar, translated the hymn into English and included it in her collection, Chorale Book for England, published in 1863. She brought German hymns to the attention of many with her excellent translations, and she was also an influential proponent of education for women.

Unlike most Christian poets and hymn writers, Neander was also a skilled composer of hymn tunes. Two of his best are Arnsberg, sung to the hymn, God Himself is With Us, and Unser Herrscher, sung to Open Now Thy Gates of Beauty. Ironically, Praise to the Lord, the Almighty, the King of Creation, is paired, not with a hymn tune by Neander, but with Lobe den Herren (Praise to the Lord), which was named after the first line of the hymn text.

And now we hear the tune, Lobe den Herren, performed by The Canadian Brass

The tune, "Lobe den Herren," was first published in 1665 in the second edition of Ander Theil des erneuerten Gesangbuch. In 1680, it first appeared paired with Praise to the Lord the Almighty, in Alpha and Omega Glaub- und Liebesübung. This translates roughly as "Alpha and Omega Credible and Pleasant Practice."

Catherine Winkworth translated the hymn into English. Hymn and tune were published as sung today in the 1864 second edition of her Chorale Book for England. Pianist, composer and conductor William Sterndale Bennett, a professor of music at Cambridge University, harmonized the tune. The 1904 edition of Hymns Ancient and Modern and the 1906 edition of The English Hymnal further popularized this pairing.

Lobe den Herren has a sturdy melody of moderate leaps and gently undulating shape and singular meter (14.14.4.7.8). It encourages robust singing of Praise to the Lord the Almighty, which is now popular among all Christians. Catholics and Protestants, who were often in bitter conflict in the 17th century, now enjoy singing this hymn.

And now let us hear, Lobe den Herren, paired with Praise to the Lord the Almighty, as performed by the Yorkminster Choir, conducted by Philip Moore.

Psalm 103:1-6 and Psalm 150 provide a doxology that is a most fitting conclusion to the Book of Psalms. These verses express both individual devotion and thankfulness for the goodness of a loving God. Finally, they encourage all believers to Praise the Lord, Our God, whose greatness is above all creation. Or, as Joachim Neander writes: "Praise to the Lord the Almighty the King of Creation." Amen.

Now, let us hear our hymn and tune, beautifully presented by the Emmaeus Symphonia Orchestra and Choir.