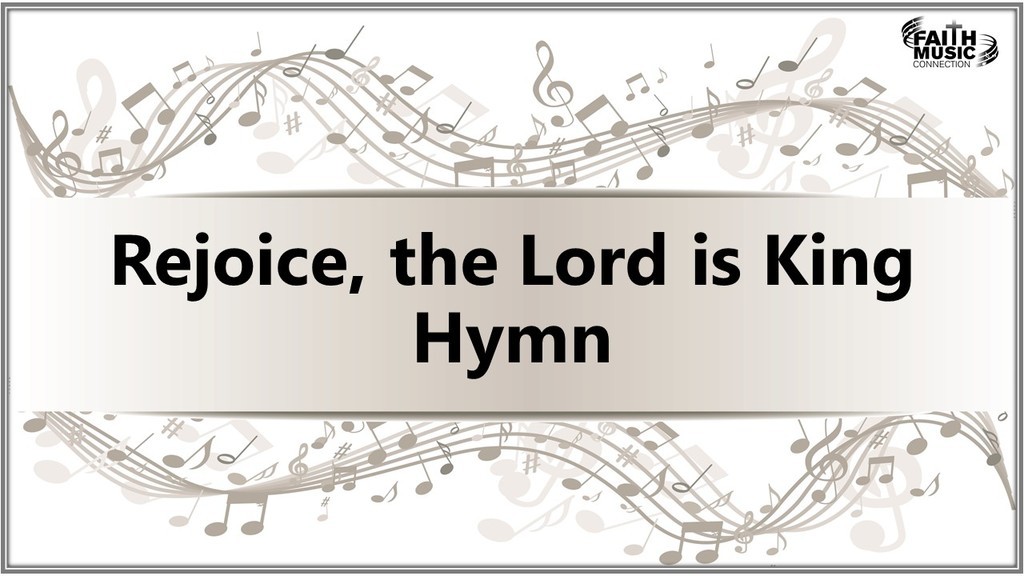 Rejoice, the Lord is King– Introduction of the Hymn

Welcome to “The Hymn of the Week.” On December 18, 1707, just shy of the shortest day of the year in Epworth, Lincolnshire, England, a fragile, tiny baby was born. The infant was the eighteenth of nineteen children of a poor Anglican clergyman and his long-suffering and devoted wife. Nine of the couple’s previous children had died in infancy. His mother feared that this boy, born several weeks premature, would also not survive. But her fears were unrealized.

Charles Wesley - Hero of the Faith

This son she taught and nurtured would one day mature into a strong, handsome man who became a great theologian, preacher and poet. He was, perhaps, better gifted than his more famous older brother, in whose shadow he has historically remained. This unlikely hero of the faith—Charles Wesley—wrote over 9,000 poetic works, including as many as 6,500 hymns. Among these is the powerful hymn “Rejoice, the Lord is King!”— “The Hymn of the Week!”

Click Below for Rejoice, the Lord is King! Lyrics

Rejoice, the Lord is King!: Hymn of the Week Radio Show Episode

Reading of Rejoice, the Lord is King! Lyrics

Rejoice, the Lord is king! Your Lord and king adore;
Mortals give thanks and sing, and triumph evermore;
Lift up your heart, lift up your voice;
Rejoice, again I say, rejoice!

Jesus, the Savior, reigns, the God of truth and love;
When He had purged our stains He took His seat above;
Lift up your heart, lift up your voice;​​​​
Rejoice, again I say, rejoice!

His kingdom cannot fail, He rules o’er earth and Heav’n,
The keys of death and hell are to our Jesus giv’n;
Lift up your heart, lift up your voice;
Rejoice, again I say, rejoice!

He sits at God’s right hand till all His foes submit,
And bow to His command, and fall beneath His feet:
Lift up your heart, lift up your voice;
Rejoice, again I say, rejoice!

He all His foes shall quell, shall all our sins destroy,
And every bosom swell with pure seraphic joy;
Lift up your heart, lift up your voice,
Rejoice, again I say, rejoice!

Rejoice in glorious hope! Jesus the Judge shall come,
And take His servants up to their eternal home.
We soon shall hear th’archangel’s voice;
The trump of God shall sound, rejoice!

And now, let us hear our hymn paired with the tune, “Darwall,” performed by your host, Larry Frazier, bass, accompanied by Terry Lowry.

Background of Rejoice, the Lord is King!

Wesley continued his studies at Christ Church College, Oxford. After graduation he became a tutor. In 1727, he founded an organization for students dedicated to upholding the highest standards of academic practice and morality in personal conduct laid down in statutes of the university.

The prevailing Calvinist theology emphasized salvation for a small group of believers—the “elect.” In contrast, Charles Wesley preached of a loving God, who laid aside aspects of divinity to take on human form. The birth of the Christ child was for the ultimate salvation and benefit of all who would believe. He poetically describes this theology in the following verses.

“Thou cannot mock the sons of men,
Invite us to draw nigh,
Offer thy grace to all, and then
Thy grace to most deny!

Lord, if indeed, without a bound,
Infinite love Thou art,
The horrible decree confound,
Enlarge thy people’s heart!”

His preaching was infused with utmost energy, enthusiasm and passion. He once became so agitated in preaching on Psalm 23, that he suffered a prolonged nosebleed. This continued for some time after he had finished his sermon.

Unlike his brother, whom he dissuaded from marrying, Charles Wesley had a happy marriage. He had two sons and a daughter. One of his grandsons, Samuel Sebastian Wesley, became a leading English composer and church musician of the 19th century.

Wesley wrote over 6500 hymns, many of which are still popular today. He expresses a wide range of Christian experience in subjective poetic language with a decidedly evangelical emphasis. In addition to “Rejoice, the Lord is King!” are the following favorites:

“Come Thou Long-expected Jesus;”
“A Charge to Keep I Have;”
“Christ the Lord is Risen Today;”
“Love Divine, All Loves Excelling;”
“Ye Servants of God, Your Master Proclaim;”
“Jesus, Lover of my Soul;” and
“Hark the Herald Angels Sing.”

"Hymns for Our Lord's Resurrection"

“Rejoice, the Lord is King!” first appeared in “Moral and Sacred Poems,” published by John Wesley, in 1744. Charles Wesley published it again, slightly revised, in his “Hymns for Our Lord’s Resurrection,” in 1746. Five of the six original stanzas contain a short refrain encouraging the believer to lift up both heart and voice. Thus, he achieves a beautiful poetic synthesis of informed, conscious thought and deep emotion.

For over 50 years, Charles Wesley served alongside his brother, tirelessly preaching and writing hymns with astounding ease and facility. His work greatly advanced the movement for “the people known as “Methodists.” Interestingly, he maintained his ordination vows as a member of the clergy of the Church of England throughout his life. And he strongly opposed the establishment of a new, separate Methodist denomination until his death in 1788.

And now, we hear “Darwall,” a tune often paired with our hymn, performed by the David Shelley ensemble.

Anglican clergyman John Darwall composed the tune now most often paired in the United States with “Rejoice, the Lord is King!” Born in Haughton, Staffordshire, England, in 1731, Darwall completed his formal education at Brasenose College of Oxford University. After graduation in 1756, the Church of England ordained him and assigned duties at St. Matthew’s parish, Walsall. There, he became vicar and served until his death in 1789.

Darwall was an accomplished amateur musician. The “Gentlemen’s Magazine” published several of his hymns and poems. He also composed metrical settings of all 150 Psalms for the “New Version of the Psalms of David.” Nahum Tate and Nicolas Brady originally published a collection with this name in 1696 without any music.

Of all the tunes composed by John Darwall, only “Darwall” continues to be widely sung today. He composed it as a setting for Psalm 148 for the dedication of a new organ in the parish church at Walsall. Aaron Williams published it in “New Universal Psalmodist, in 1770. This tune is sometimes called, “Darwall’s 148th.”

Darwall’s tune moves along briskly. It pauses only at the end of each line, typical of the “old style” of metrical Psalm versions. The rhythm also slows on the words, “Lift up your voice” at the beginning of the refrain. But the most striking and stirring feature is the rising notes of the melody of the last line spanning a full octave plus one step. Here is the pattern: Do-Re-Mi-Fa-Sol-La-Ti-Do-Ti-Do—a most powerful and appropriate ending to Charles Wesley’s great hymn of praise.

And now, we hear “Darwall,” played by organist Frederick Swann.

“Rejoice, the Lord is King!” is a beautiful, poetic statement of the Kingship of Jesus Christ over all creation. Wesley invokes several passages of scripture, including Psalm 97 and verses from the first chapters of Hebrews and Revelation. The first five stanzas include a refrain based on Philippians 4:4— “Rejoice in the Lord always; again, I will say, rejoice!”

Each of the six stanzas begins with a powerful, concise statement of faith. Charles Wesley’s inspired poetic skill immediately brings the message of Christ to all—believer, seeker or skeptic.

“Rejoice, the Lord is King;”
Jesus the Savior reigns;
His Kingdom cannot fail;
He sits at God’s right hand;
He all his foes shall quell; and
Rejoice in glorious hope.”

Join Countless Believers Through the Ages

This wonderful statement of faith and stirring tune allow us to join countless believers through the ages in singing. “Lift up your heart, lift up your voice; rejoice, again I say, rejoice!

And now, let us hear our hymn set to the tune “Gopsall,” by Georg Frideric Handel, beautifully performed by the Yorkminster Choir and Philip Moore.