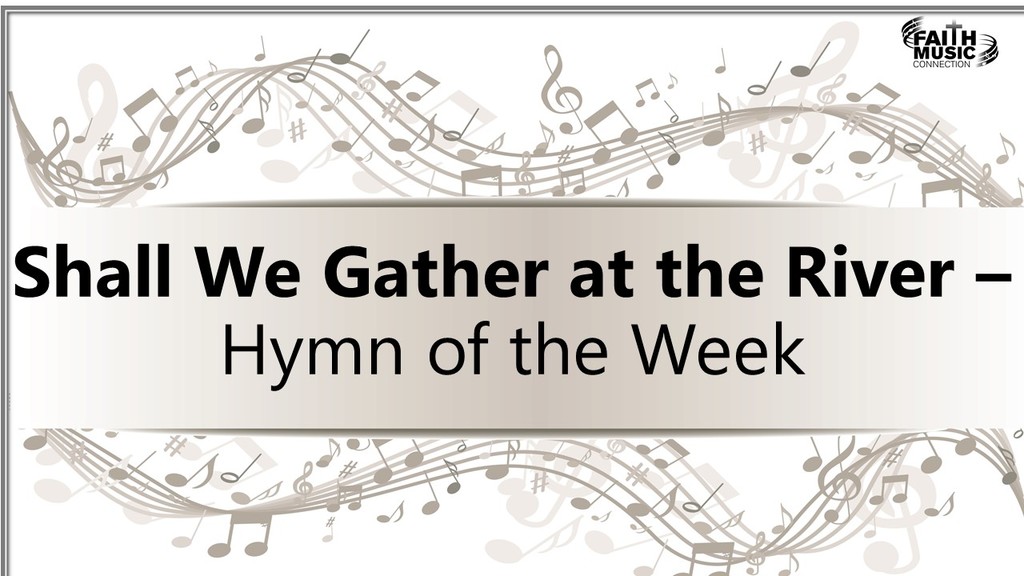 Shall We Gather at the River -Introduction of the Hymn

This is The Hymn of the Week with Dr. Larry Frazier—presenting the good news in song, combining faith and everyday experience. In his Civil War diaries, American poet Walt Whitman describes the United States as follows: "It seem'd sometimes as if the whole interest of the land, North and South, was one vast central hospital." This week's hymn was written in July, 1864, during this time of War Between the States. Concurrently, in Brooklyn, New York, miles from the battlefields of Virginia, a typhoid epidemic was claiming many lives. With its message of hope and an easy, beautiful melody, Shall We Gather at the River? has become one of the most familiar of American hymns.

Click Below for Shall We Gather at the River Lyrics 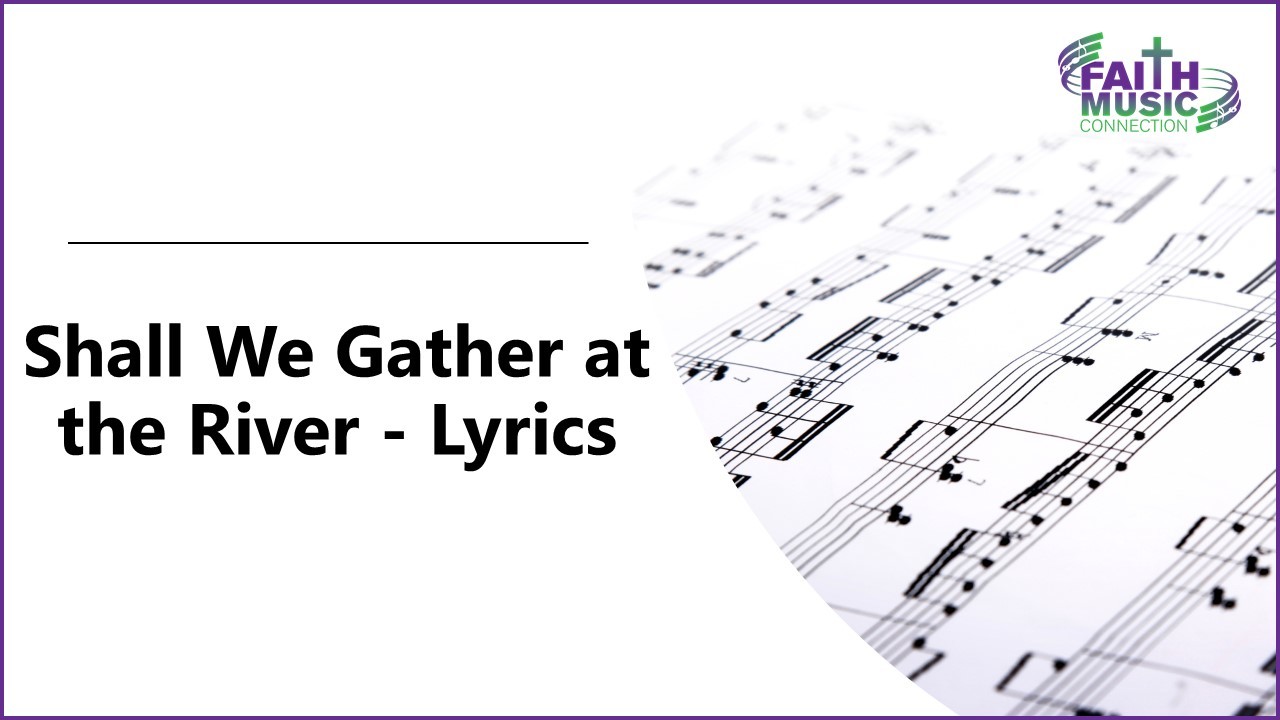 Shall We Gather at the River: Hymn of the Week Radio Show Episode

Reading of Shall We Gather at the River Lyrics

Shall we gather at the river, Where bright angel feet have trod,
With its crystal tide forever Flowing by the throne of God?

On the margin of the river, Washing up its silver spray,
We will talk and worship ever, All the happy golden day.

Ere we reach the shining river, Lay we every burden down;
Grace our spirits will deliver, And provide a robe and crown.

At the smiling of the river, Mirror of the Savior's face,
Saints, whom death will never sever, Lift their songs of saving grace.

Soon we'll reach the silver river, Soon our pilgrimage will cease;
Soon our happy hearts will quiver With the melody of peace.

And now, let us hear Shall We Gather at the River, as performed by the Mormon
Tabernacle choir and the Utah Symphony Orchestra, with Michael Tilson Thomas.

Background of Shall We Gather at the River

Robert Lowry wrote both words and music of Shall We Gather at the river?  Born in Philadelphia in 1826, he attended the University of Lewisburg (now Bucknell University) where he excelled as a student of literature and theology, graduating in 1854 as valedictorian of his class. He was ordained a Baptist minister that same year, the beginning of a long and successful career as a pastor, preacher, author, editor, professor of literature, composer and hymn writer.

Lowry was pastor of a large church in Brooklyn when he wrote Shall We Gather at the River? during an extremely hot July day in 1864. A typhoid epidemic was sweeping the city. He suffered from symptoms of heat exhaustion from the burden of ministering to the many victims.

Inspiration for Shall We Gather at the River

During this time, he had an apocalyptic vision of the gathering of the saints at the heavenly river flowing in a crystal-clear stream beneath the throne of God. As he contemplated the scene, both the words and the music of the hymn seemed to flow into his consciousness. The question, "Shall we gather?" led to the emphatic answer of the refrain, "Yes, we'll gather." Invigorated by this burst of inspiration, he quickly moved to the parlor organ in his home. There he played and sang the first stanza. He then quickly wrote out the entire hymn, words and music.

And now we hear Shall We Gather at the River, arranged by Terry Lowry beautifully sung by soprano Julie Lowry.

The proper name of the tune which Robert Lowry composed for Shall We Gather at the River? is Hanson, after Hanson Place Baptist Church, Brooklyn New York, where Lowry was pastor at the time he wrote this famous hymn in July, 1864. It was published a year later in Happy Voices, the first of a large number of hymn collections edited by Lowry. Soon, it became popular in England and throughout the world.

Shall We Gather at the River? has been arranged for solo voice by 20th - century American Composers Charles Ives and Aaron Copland. Copland included it in his collection, "Early American Songs." It was notably performed by the great American baritone William Warfield and is a mainstay of concert baritones today. Lowry is also author of several other hymns such as Nothing but the Blood of Jesus, Only One Name and Low in the Grave He Lay.

Robert Lowry is composer of an even larger number of hymn tunes, including All the Way (sung with Fanny Crosby's All the Way My savior Leads Me). In Marching to Zion (sung with Isaac Watts' Come Ye that Love the Lord) Lowry added the refrain that gave the tune its name. He also added a refrain in Need (sung with I Need thee Every Hour, by Annie Sherwood Hawkes). Mrs. Hawkes was a member of Hason Place Baptist while Lowry was pastor. He also composed Something for Jesus (sung with Saviour, Thy Dying Love, by Sylvanus D. Phelps). These hymns, sung with Lowry's tunes, remain popular today.

On his 70th birthday in 1889, Phelps received the following message from Lowry: "It is worth living 70 years even if nothing comes of it but one such hymn as Saviour, Thy Dying Love... Happy is the man who can produce one song which the world will keep singing after the author shall have passed away..." By that standard, with the enduring popularity of Shall We Gather at the River, Robert Lowry was a happy man, indeed. He died in 1899.

And now we hear "At the River," arranged by Aaron Copland in his Old American Songs, performed by Welsh baritone Bryn Terfel, with Barry Wordsword and the London Symphony Orchestra.

Water, Source of Life and Death

From ancient times, water has been a source of both life and death. The 1864 typhoid epidemic, which killed hundreds of citizens of Brooklyn, sprang from contaminated water. In response, Robert Lowry did not despair. Instead, He wrote inspired verses affirming faith in the ultimate gathering and reunion of all believers in the heavenly city.

His testimony invites us to consider verses from Revelation 22, the final chapter in the concluding book of the Bible: "Then the angel showed me the river of the water of life, bright as crystal, flowing from the throne of God and of the Lamb through the middle of the street of the city... Nothing accursed will be found there anymore. But the throne of God and of the Lamb will be in it, and his servants will worship him... And there will be no more night; they need no light of lamp or sun, for the Lord God will be their light, and they will reign forever and ever... And let everyone who is thirsty come. Let anyone who wishes take the water of life as a gift... The grace of the Lord Jesus be with all the saints."

And now, let us hear Shall We Gather at the River, as sung by Anonymous 4.

Until then, this is your host, Dr. Larry Frazier...