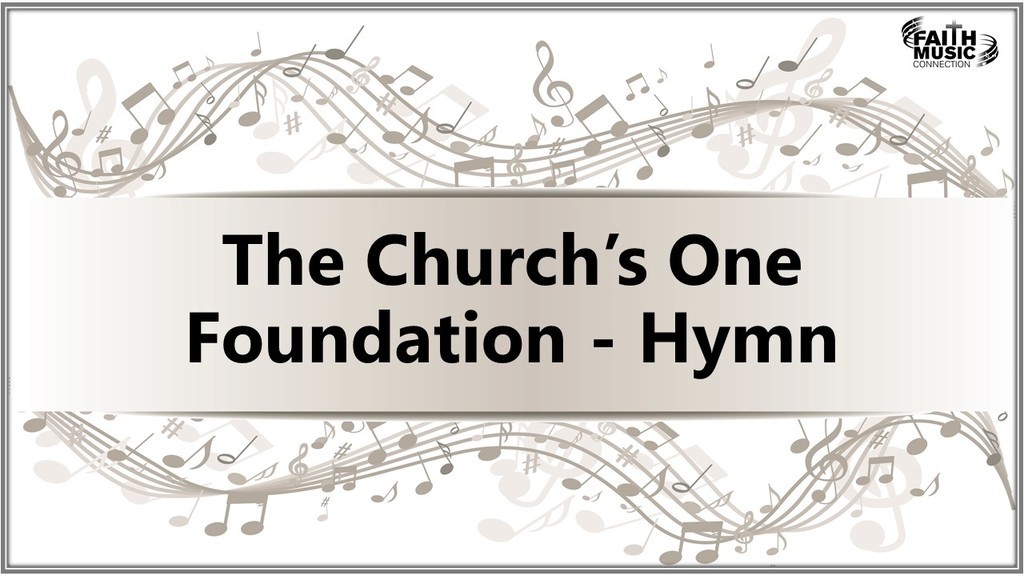 The Church’s One Foundation – Introduction of the Hymn

Welcome to The Hymn of the Week. The resolution of conflict is a central theme of history. Early Christian controversies over doctrine culminated in the formation of the Nicene Creed. Most Christians, today, continue to accept the older, more concise statement known as the Apostles’ Creed.

A mid-19th century, concerned pastor addressed a controversy over the authority of scripture and unthinking recitation of the Apostles’ Creed. His concern led him to write one of the great hymns of Christian unity – The Church’s One Foundation – "The Hymn of the Week!” 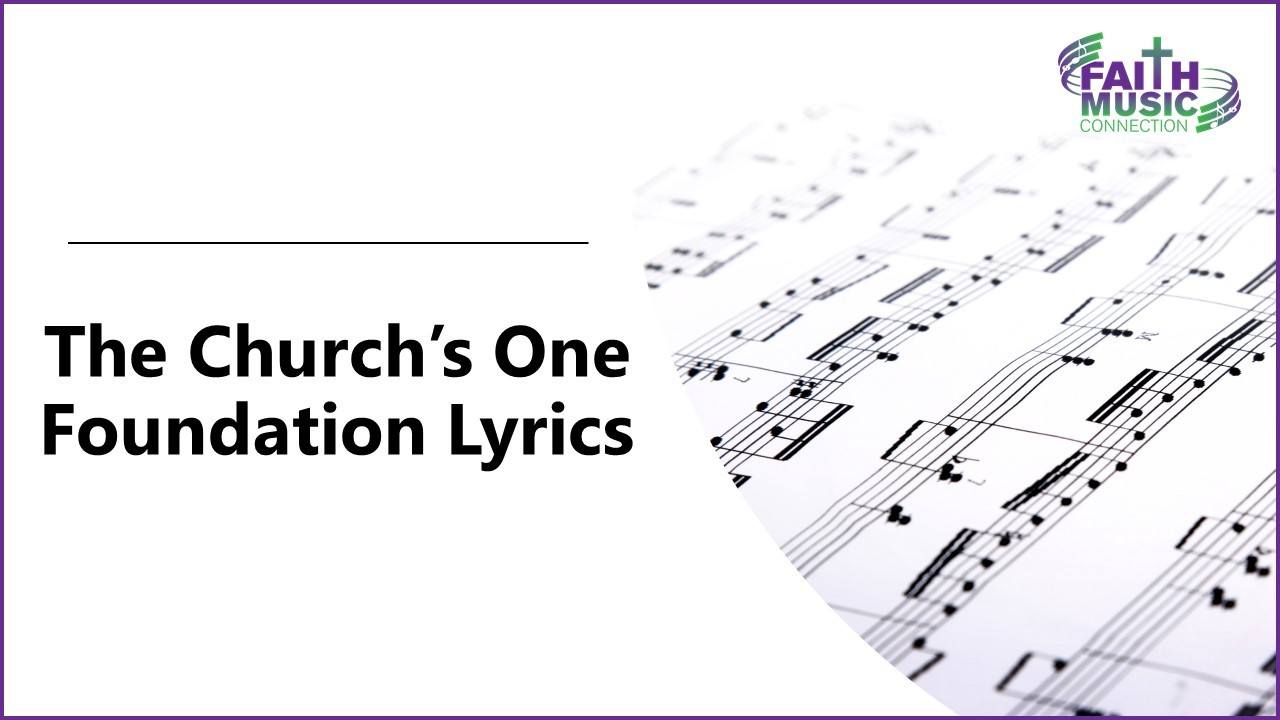 The Church's One Foundation: Hymn
of the Week Radio Show Episode

Reading of The Church's
One Foundation Lyrics

The Church’s One Foundation
Is Jesus Christ her Lord,
She is His new creation
By water and the Word.
From heaven He came and sought her
To be His holy bride;
With His own blood he bought her,
And for her life He died.

She is from every nation,
Yet one o’er all the earth;
Her charter of salvation,
One Lord, one faith, one birth;
One holy Name she blesses,
Partakes one holy food,
And to one hope she presses
With every grace endued.

The Church shall never perish!
Her dear Lord to defend,
To guide, sustain and cherish,
Is with her to the end;
Though there be those who hate her,
And false sons in her pale,
Against both foe and traitor
She ever shall prevail.

Though with a scornful wonder
Men see her sore oppressed,
By schisms rent asunder,
By heresies distressed.
Yet saints their watch are keeping,
Their cry goes up, “How long?”
And soon the night of weeping
Shall be the morn of song!

‘Mid Toil and tribulation,
And tumult of her war,
She waits the consummation
Of peace forevermore;
Till with the vision glorious,
Her longing eyes are blest,
And the great Church victorious
Shall be the Church at rest.

Yet she on earth hath union
With God the Three in One,
And mystic sweet communion
With those whose rest is won,
With all her sons and daughters
Who, by the Master’s hand
Led through the deathly waters,
Repose in Eden land.

O happy ones and holy!
Lord, give us grace that we
Like them, the meek and lowly,
On high may dwell with Thee;
There, past the border mountains,
Where in sweet vales the Bride
With Thee by living fountains
Forever shall abide!

And now, let us hear The Church’s One Foundation paired with the tune, Aurelia, performed by the Choir of King’s College, Cambridge, with Richard Farnes and Stephen Cleobury.

Background of The
Church’s One Foundation

The Church’s One Foundation is the most famous of the many hymns written by Samuel John Stone. He was born in 1839 at Whitmore, Strattfordshire, England, the son of An Anglican minister. After completing his baccalaureate degree from Pembroke College, Oxford, in 1862, He was ordained in the Church of England.

Stone served as curate of Windsor from 1862 to 1870. Shortly after competing graduate studies at Pembroke in 1872, he was appointed vicar of St. Paul’s Haggerston, located in a poor section of London. He worked tirelessly for the benefit of the people of his parish and became known as “the poor man’s pastor.”

The Church's One Foundation - Jesus Christ

Also, a man of letters, Samuel J. Stone published in 1866, Lyra Fidelium, a cycle of twelve hymns on the twelve articles of the Apostle’s Creed. The ninth article, “I believe in the holy catholic church—referring to the church universal—was the basis for The Church’s One Foundation. This hymn beautifully amplifies the communion of all believers in relationship with Jesus Christ as head of the church.

Stone makes critical reference to a prominent Anglican bishop who had been censured for publishing essays questioning the authority and historical accuracy of scripture in the third stanza.

“The Church shall never perish!
Her dear Lord to defend,
To guide, sustain and cherish,
Is with her to the end:
Though there be those who hate her,
And false sons in her pale,
Against both foe and traitor
She ever shall prevail.”

Paired with the Tune, Aurelia

The Church’s One Foundation is almost always paired with the tune, Aurelia, written two years earlier, by Samuel Sebastian Wesley.

And now, let us hear Aurelia, performed by organist Timothy Albrecht. Then, hear Leontyne Price and the Choir of Men and Boys of St. Thomas Episcopal Church present a wonderful performance of our hymn.

Aurelia is the tune so linked to our hymn that most people would identify it as “The Church’s One Foundation.” It is probably the most popular of the many hymn tunes composed by Samuel Sebastian Wesley. Born in 1810, he was the grandson of Charles Wesley, co-founder of the Methodist Church. He was an extremely gifted musician, first studying music from his father. Later, he earned baccalaureate and doctoral degrees from Oxford University. He served as organist at a number of churches in London. For a short time, he was pianist coach and conductor of choruses at the English Opera House. After leaving London, he served as organist at Hereford, Exeter, Leeds and Gloucester.

Composer of Hymns and Anthems

Although Wesley wrote the music for over 130 hymns, he is better known for his over three dozen anthems. This output includes “Thou Wilt Keep Him in Perfect Peace and “The Wilderness.” “Praise the Lord, O My Soul,” an extended anthem, includes the famous, hymn-like section entitled, “Lead Me, Lord.”

In addition to his activities as a church organist and composer, Wesley played a prominent role in improving the salaries, status and working conditions of church musicians. He also served as a professor of organ at the Royal Academy of Music, in 1850. And, he was also an advocate for improved organ building in England.

Aurelia and The Church's One Foundation

Wesley originally composed Aurelia for the hymn, Jerusalem the Golden. It appeared in the collection, “A Selection of Psalms and Hymns,” published in London in 1864, edited by Wesley and Charles Kemble. Wesley’s wife suggested the name Aurelia, after “aurum,” the Latin word for “gold.” Aurelia first appeared with The Church’s One Foundation in an 1868 appendix to Hymns, Ancient and Modern.

And now, let us hear our hymn, as sung by the Festival Choir and Hosanna Chorus

And now, let us meditate on two other hymns of Samuel J. Stone. The first, Weary of Earth, and Laden with My Sin, was the author’s personal favorite.

Weary of Earth, and Laden with My Sin

Weary of earth, and laden with my sin,
I look at Heav’n and long to enter in,
But there no evil thing may find a home:
And yet I hear a voice that bids me “Come.”

It is the voice of Jesus that I hear;
His are the hands stretched out to draw me near,
And His blood that can for all atone,
And set me faultless there before the throne.

Yea, Thou wilt answer for me, righteous Lord;
Thine all the merits, mine the great reward;
Thine the sharp thorns, and mine the golden crown;
Mine the life won, and Thine the life laid down.

Naught can I bring, dear Lord, for all I owe,
Yet let my full heart what it can bestow;
Like Mary’s gift, let my devotion prove,
Forgiven greatly, how greatly I love.

Our God of Love, Who Reigns Above

The second hymn, Our God of Love, Who Reigns Above, appeared in “The Church Monthly,” July 1899, about a year before Stone’s death.

Our God of love, who reigns above,
Comes down to us below;
‘Tis sweet to tell He loves so well;
And ‘tis enough to know.

So deep, so high—like air and sky,
Beyond us, yet around;
He whom our mind can never find
Can in our heart by found.

Lord God, so far, past sun and star,
Yet close to all our ways!
In love so near, be pleased to hear
Thy little children’s praise.

O may that sign that we are Thine—
Our Father, Savior, Friend—
Which sealed our brow, be on us now,
And with us to the end.

Through all our way, and every day
Believed, beloved, adored;
Be this our grace, to see Thy face
In Jesus Christ our Lord.