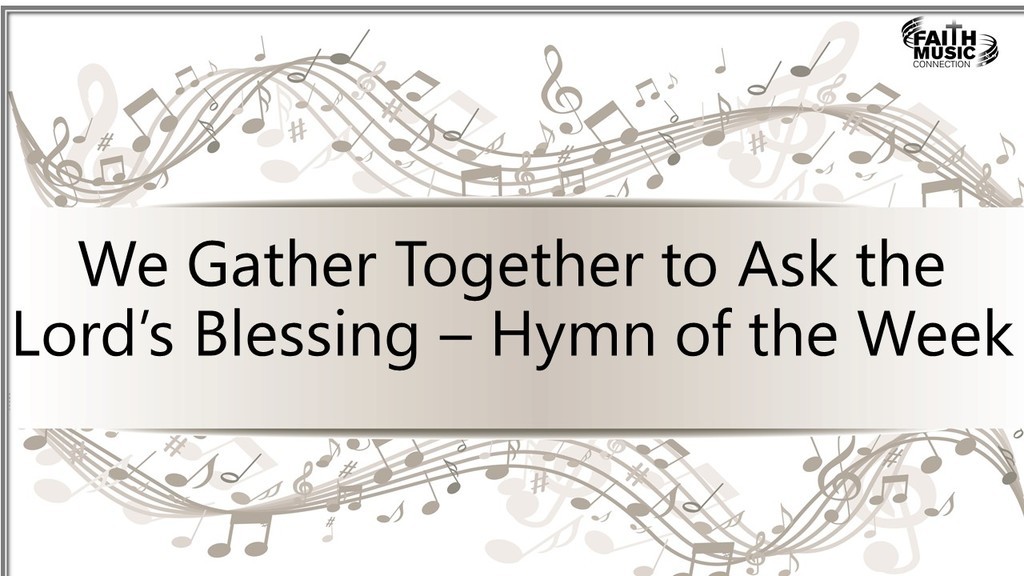 The "Low Country" - Center of Conflict

Welcome to The Hymn of the Week. The “low country” of Western Europe was the center of great religious and political conflict during the sixteenth century. Importantly, this area is located to the North of France and to the West of Germany. Two major foes competed. First, Calvinists controlled a northern sector comprising what is now the Netherlands. Second, Catholics dominated a southern sector, an area now known as Belgium, Luxembourg and  Spain. Furthermore, by controlling the "low country" for the Church in Rome, Spain could remain the dominant power of Western Europe.

Periods of alternating economic prosperity and bloody but indecisive military conflict continued for almost one-hundred years. And, these conflicts spanned the sixteenth and seventeenth centuries. Understandedly, the border area between the northern and southern sectors was the center of many battles and sieges. Finally, on January 24, 1597, a decisive battle was fiercely fought outside the city of Turnhout. There, Dutch cavalry commanded by Prince Mauritz defeated a much larger Spanish cavalry contingent.

In Celebration and Thanksgiving

Consequently, in celebration of and thanksgiving for this victory, an anonymous Dutch hymn and tune were written. Shortly before publication of this hymn in 1626, a group of 102 Puritans set sail on the Mayflower. Earlier, they had fled to the Netherlands from England to escape religious persecution. Subsequently, they arrived at Plymouth Rock in December 1620. After enduring a harsh and deadly winter, these pilgrims, through the aid of native Americans, celebrated a bountiful harvest in 1621. Most noteworthy, this is popularly known as the first thanksgiving feast.

The anonymous Dutch hymn remained unknown to English-speaking people until its translation and republication in the late nineteenth century.  Today, it is particularly connected to the Thanksgiving holiday celebration in the United States. Also, it is another Dutch connection to this important holiday. This beautiful hymn, “We Gather Together to Ask the Lord’s Blessing” is…The Hymn of the Week! 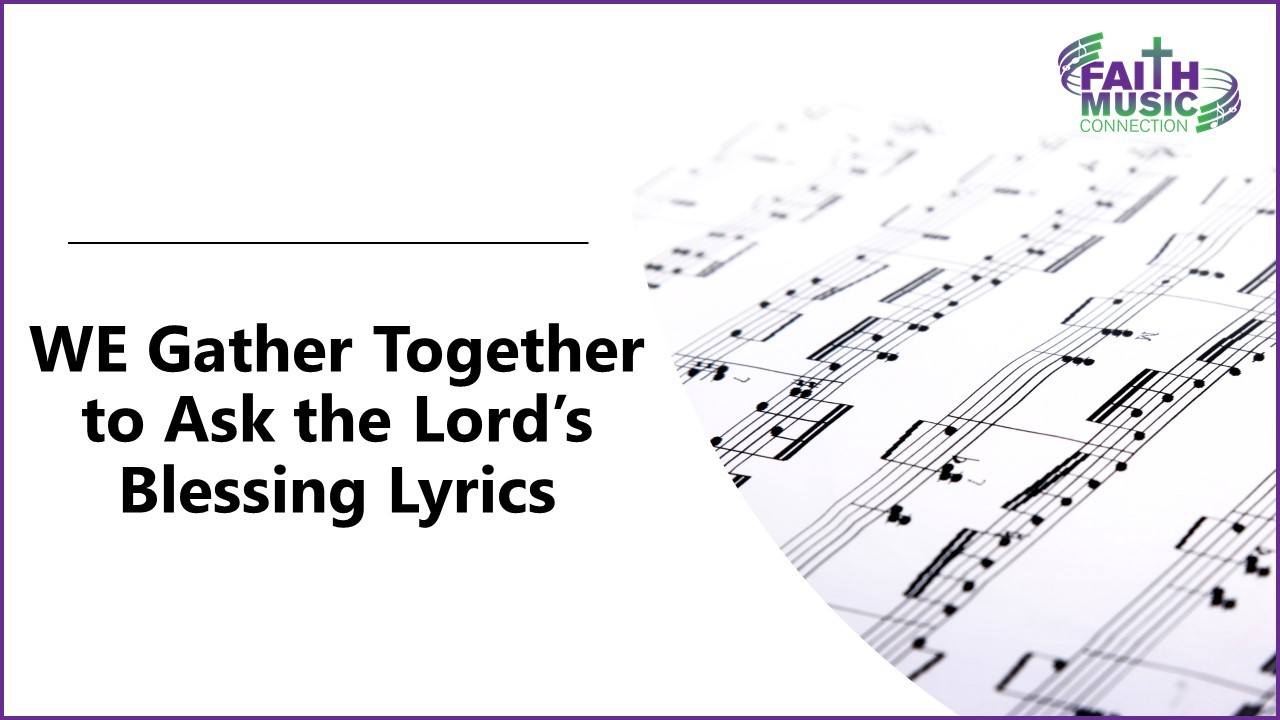 We Gather Together to Ask the Lord's Blessing: Hymn of the Week Radio Show Episode

Reading of We Gather Together to Ask the Lord's Blessings Lyrics

We gather together to ask the Lord’s blessing.
He chastens and hastens His will to make known.
The wicked oppressing now cease from distressing.
Sing praises to His name; He forgets not His own.

Beside us to guide us, our God with us joining,
Ordaining, maintaining His kingdom divine.
So, from the beginning the fight we were winning.
Thou, Lord, were at our side; all glory be Thine!

We all do extol Thee, Thou Leader triumphant,
And pray that Thou still our defender will be.
Let Thy congregation escape tribulation.
Thy Name be ever praised! O Lord make us free!

And now, let us hear our hymn as performed by the Sanctuary Choir of First Baptist Church, Carrollton, Georgia.

Background of We Gather Together to Ask the Lord's Blessing

Adrianus Valerius (1575-1620), notary, military clerk and alderman, compiled our hymn. Furthermore, he was also a member of an important Dutch amateur poets society. Using his poetic skills, Valerius paired the anonymous hymn with a Dutch folksong. Subsequently, he included it in a collection which was published posthumously, in 1626. About 250 years later, Viennese musician Edward Kremser discovered the hymn. Later, he included it in a collection entitled Sechs Altniederlaendische Volkslieder (Six Old-Dutch Folksongs), published in Leipzig, in 1877.

Theodore Baker translated this hymn into English in 1894. Born on June 3, 1854, in New
York City, Baker studied music at the University of Leipzig. After receiving his doctorate,
he returned to the United States. Because of his outstanding qualifications, he worked as literary editor of G. Schirmer Music from 1896-1926. In addition to his translation of “We Gather Together to Ask the Lord’s Blessing,” Baker also translated the beautiful Christmas hymns, “While by my Sheep,” and “Lo, How a Rose E’er Blooming. He died in Dresden, Germany, in 1934, at the age of 83.

And now, we hear an arrangement of the tune, performed by organist Virgil Fox.

Eduard Kremser, composer and conductor, was a life-long citizen of Vienna, Austria. Born on April 10, 1838, Kremser became chorus master of the Vienna Men’s Choral Society in 1869. In researching repertoire, he discovered the Dutch folksong associated with “We Gather Together to Ask the Lord’s Blessing.” Recognizing its potential, he arranged the tune for men’s chorus and orchestra and published it in Leipzig, in 1877.

American scholar Theodore Baker, studying music there, brought the arrangement to the United States, where it was quite well-received. Fittingly, he named the tune Kremser in honor of the arranger. Shortly thereafter, hymn and tune first appeared in an American hymnal in 1903. Subsequently, the Methodist-Episcopal Church included it in their 1935 hymnal. Because of these developments, its popularity throughout the United States greatly increased. Most importantly, it has become a favorite hymn of thanksgiving.

And now, let us hear the tune, Kremser, played by guitarist Tim Bruce, followed by arrangements by the Classical Praise Woodwinds and the Canadian Brass.

No one is immune from the ravages of life—natural disasters, war, disease, death. Most noteworthy, in responding to this reality, hymn writers, through the ages, have encouraged a spirit of humble thankfulness for life’s blessings. For a great example, consider Psalm 100 from the Old Testament book of Psalms, the hymn book of the Bible.

“Make a joyful noise to the Lord, all the earth. Worship the Lord with gladness; come into his presence with singing. Know that the Lord is God. It is he that made us, and we are his. We are his people and the sheep of his pasture. Enter his gates with thanksgiving and his courts with praise. Give thanks to him; bless his name. For the Lord is good; his steadfast love endures forever and his faithfulness to all generations.” Amen!

And now, let us hear a beautiful arrangement of our hymn, performed by the Dale Warland Singers.