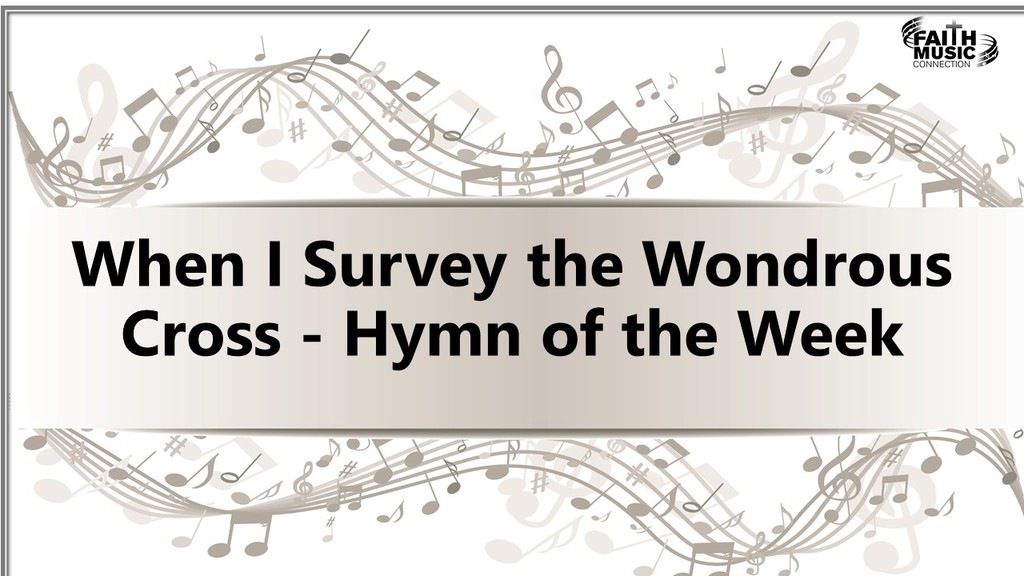 Click Below for When I Survey the Wondrous Cross Lyrics 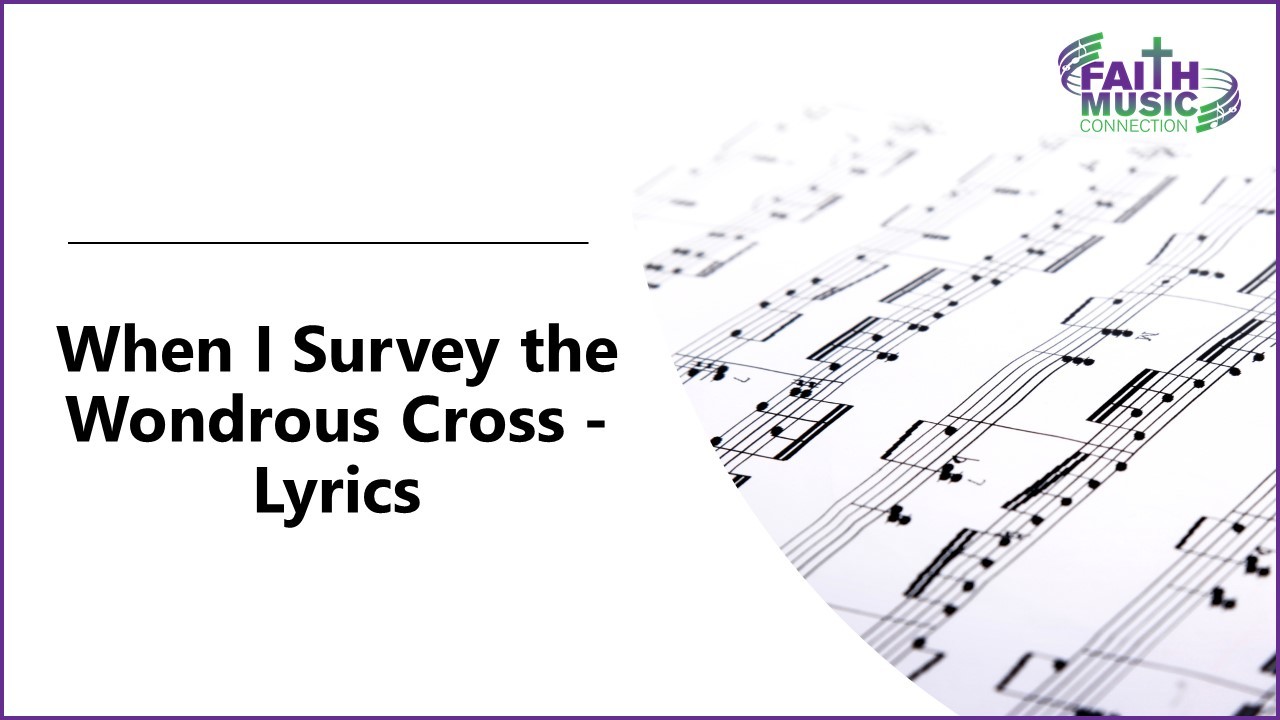 When I Survey the Wondrous Cross: Hymn of the Week Radio Show Episode

Reading of When I Survey the Wondrous Cross Lyrics

When I survey the wondrous cross
On which the Prince of glory died,
My richest gain I count but loss,
And pour contempt on all my pride.

Forbid it, Lord, that I should boast,
Save in the death of Christ my God!
All the vain things that charm me most,
I sacrifice them to His blood.

See from His head, His hands, His feet,
Sorrow and love flow mingled down!
Did e’er such love and sorrow meet,
Or thorns compose so rich a crown?

His dying crimson, like a robe,
Spreads o’er His body on the tree;
Then I am dead to all the globe,
And all the globe is dead to me.

Were the whole realm of nature mine,
That were a present far too small;
Love so amazing, so divine,
Demands my soul, my life, my all.

And now, let us hear this wonderful hymn, performed by the Londonderry Choir

Background of When I Survey the Wondrous Cross

Isaac Watts, author of When I Survey the Wondrous Cross, is universally known as the "Father of English Hymnody." He was born in Southampton, England, in 1674, to devout Calvinistic parents, who were often persecuted for their non-conformist beliefs. Watts showed a propensity for books and poetry, learning Latin, Greek, French and Hebrew by the age of 13. Several prominent local citizens offered to finance a university education for him. Instead, he decided to study in the non-conformist academy of Thomas Row at Stoke Newington, on the outskirts of London.

After leaving the academy, he served as assistant pastor of the Mark Lane Independent Chapel, London. He became pastor in 1702, a position he retained for the rest of his life. In 1712, while seriously ill, he accepted an invitation by Sir Thomas Abney to live at his estate at Hertfordshire. Though he recovered, his health remained frail. He continued to live with the Abneys, tutoring their children and writing sermons, hymns and many books. One of these books, Logic, was used as a textbook at Oxford University until his death in 1748, age 74. Though only five feet tall, this well-loved giant of a man was honored after his death with a statue in the Poets' Corner of Westminster Abbey.​

Isaac Watts wrote most of his 600 hymns before he reached the age of 30. In contrast to the half-hearted Psalm singing characteristic of the times, Watts wrote "hymns of human composure," often in the first person. He expressed the language of the New Testament allowing Christians, then and now, to sing of their personal faith and experience.

Watts wrote many new paraphrases of the Psalms, including, Our God  Our Help in Ages Past (Psalm 90), Jesus Shall Reign Where Ere the Sun (Psalm 72) and the Christmas hymn, Joy to the World (Psalm 98). Other Watts hymns still widely sung today include, I Sing the Mighty Power of God, Come Holy Spirit Heavenly Dove, Am I a Soldier of the Cross, Alas and Did my Savior Bleed and many others.

Watts, like Lowell Mason, also enjoyed working with children. His Divine Songs for Children, published in 1715, continues to be popular today.

Charles Wesley on When I Survey the Wondrous Cross

When I Survey the Wondrous Cross first appeared in 1707 in Watts' Hymns and Spiritual Songs. Charles Wesley, who wrote over 6,000 hymns himself, is reported to have said he would give up all his hymns if he could have written this hymn. Subtitled Crucifixion to the World by the Cross of Christ, our hymn stirs Christian spiritual emotion in contemplation of God's glory and revelation of Christ and in humble gratitude at the outpouring of love in Christ's death on the cross.

And now we hear the tune, Hamburg, performed by pianist John Innes.

Born in Medfield, Massachusetts, in 1792, the son of a mechanic of limited financial resources, Lowell Mason had from his earliest years a great passion for music. He learned to play a number of instruments, but he excelled as a singer. By the age of 16 he was teaching classes on singing.

Mason left Massachusetts at the age of 20 and moved to Savannah, Georgia, to make his mark as a banker. In Savannah, he continued his music studies with the German teacher, Frederick Abel. Soon, he became director of music, organist and choirmaster at the Independent Presbyterian Church. There, he established music classes in the Sunday school, where he taught the children rudimentary music skills by the use of hymns and other church music.

He also began to compose music, arranging a number of Psalm tunes and music by Haydn, Mozart and Beethoven, combined with his own original compositions. This first collection was published in Boston, in 1821, by the Handel and Haydn Society, a prestigious organization devoted to the promotion and performance of classical music, under the title “The Boston Handel and Haydn Society’s Collection of Church Music.”

Father of Music Education in the U.S.

This collection was a great success and ultimately led Mason to return to Massachusetts in 1827. In Boston, he established music classes for children based on the model he had developed in Savannah, and by the mid 1830’s his music teaching methods became a part of the prescribed education program of the public schools of Boston—the first public school music education program in the United States.

He established the Boston Academy of Music in 1833. Subsequently, he was appointed Superintendent of Music for the Boston school system in 1838. Mason wrote over 1600 church music compositions, including the music for numerous familiar and popular hymns, including When I Survey the Wondrous Cross​​​​.

In 1851, he moved to New York City, to be closer to his sons, one of whom was a concert pianist. The other son was a principal in the Mason and Hamlin Company, the builder of fine pianos until late in the 20th century. After a trip to Germany, he became devoted to the idea of congregational singing as the basis for music in worship.

Upon his return, he built a great program of congregational singing as Director of Music at the Fifth Avenue Presbyterian Church. He served there for seven years until retirement to his estate in Orange, New Jersey, in 1860, at the age of 68. He remained active in church music until his death in 1872.

When I Survey the Wondrous Cross set to Lowell Mason's tune, Hamburg, is popular in the United States. Conversely, In Great Britain, this hymn is most often paired with Rockingham, by Edward Miller (1735-1807). Miller, was a prominent English organist, flautist--he played in George Frideric Handel's orchestra--and composer.

And now we hear our hymn paired with Rockingham, performed by the Choir of King's College, Cambridge, with Richard Farnes and Stephen Cleobury.

Isaac Watts explained his approach to writing hymns in the following quote. "Where the Psalmist describes religion by the fear of God, I have often joined faith and love to it. [Continuing] where he speaks of the pardon of sin through the mercies of God, I rather choose to mention the sacrifice of Christ, the Lamb of God. Where he promises abundance of wealth, honor and long life, I have changed some of these typical blessings for grace, glory and life eternal, which are brought to light by the gospel, and promised in the New Testament."

When I Survey the Wondrous Cross is based on Galations 6:14 from the New Testament. "May I never boast of anything except the cross of our Lord Jesus Christ, by which the world has been crucified to me, and I to the world." This verse inspired Isaac Watts. Magnified through the collaboration of Watts and Mason, it continues to stir our "spiritual emotions" today.

And now, let us hear our hymn with the tune Hamburg, arranged by Gilbert Martin and sung by the Sanctuary Choir of First Baptist Church, Carrollton, Georgia, with organist Elizabeth McCollum, directed by Terry Lowry.